Project approved in 2014, but long-delayed

Following a public hearing on Oct. 21, the long-delayed 248 Tioronda development is inching toward approval, again.

The Beacon City Council is expected to vote on Monday, Nov. 4, on a special-use permit for the project. If approved, it would return to the Planning Board for the final step, approval of the site and subdivision plans.

The development was approved in 2014 as a 100-unit residential complex slated for a 9-acre stretch of land between Tioronda Avenue and Fishkill Creek, but was beset by numerous delays and a change in ownership. It is now owned by Bernard Kohn, who also led the investors that purchased the Craig House property and the 344 Main St. apartment building.

Still unbuilt, it was “downzoned” two years ago when the council revised zoning regulations for the Fishkill Creek area.

Renderings show views of the planned development from Tioronda …

That change compelled the developer to include at least 25 percent commercial use and cut the density by a third because the parcel has environmentally sensitive features such as wetlands. The project went back to the Planning Board for review in January 2018 as two buildings with 64 apartments and a separate office building with 25,400 square feet of commercial space. It will also include part of the Fishkill Creek Greenway & Heritage Trail.

As a condition of the new zoning, the City Council must grant a special-use permit.

Public feedback during the Oct. 21 hearing was lukewarm, with most of the comments centered around whether the development will include three- or four-story buildings. Project drawings show two stories with a third, smaller, gray-colored story and gray “boxes” on top. Parking garages will be built in a lower level under the apartments.

The rendering “says that it’s a three-story building, but to me it looks like a four-story building,” said resident Arthur Camins, who urged the council to show “the people in Beacon that we actually pay attention to our own laws. That is an area that’s zoned for three stories.”

In addition, he asked, “Do we actually need another 64 units in Beacon, absent taking a broader look at the impact of development” on infrastructure and the city’s “woefully inadequate” affordable housing stock? 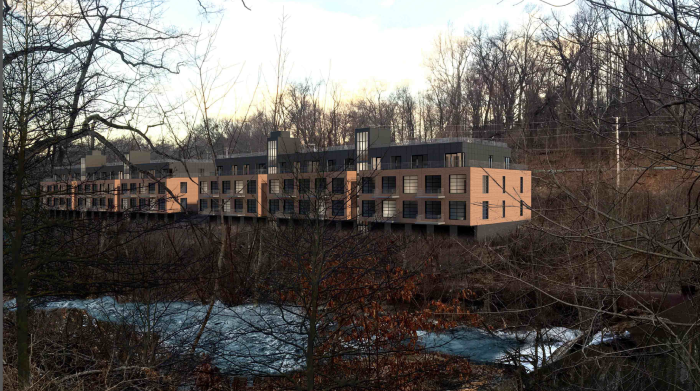 Jessica Eriksmoen said she and her husband bought their home across the street from the project site 10 years ago with the expectation that it would be developed. But “we were told it was zoned for three levels,” she said, and “there has to be some amount of confidence in that zoning.” Looking at the drawings, she said, it “seems to be trying to get away with something.”

Project officials appeared before the City Council at its Oct. 28 meeting and explained that the gray boxes on top of the buildings are “stair bulkheads” that will allow access to the roof. Some members of the council questioned their necessity while project architect Alexander Blakely defended them as “attractive architectural features.”

In a memo to the council, City Attorney Nick Ward-Willis indicated that the buildings are three stories when viewed from Tioronda Avenue and four stories when viewed from Fishkill Creek. The new zoning code allows three-story buildings with a maximum height of 40 feet in the district, he wrote, which is measured “from the average grade level of the side of the building facing the primary street view.”

The below-ground parking “may appear to create a fourth story when viewed from the east,” the memo said, but the “parking garage level is not visible from the primary street [Tioronda]” and therefore “is not included in the building height calculations.”

As for the bulkheads, the developer agreed at the meeting on Monday to try to minimize their size and to camouflage them with plantings.