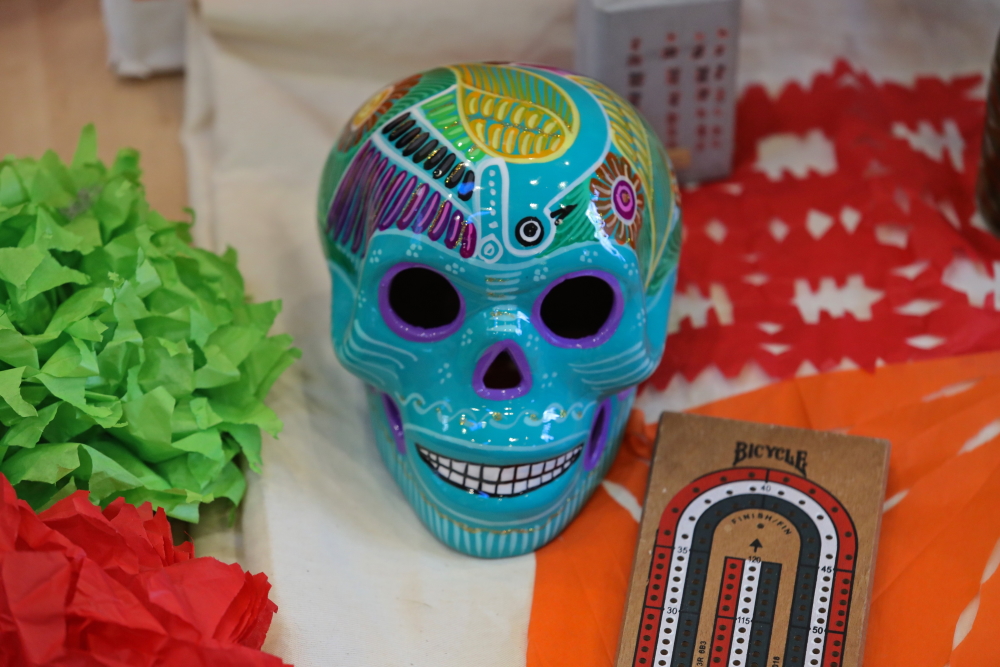 The celebration of Dia de Los Muertos is a highlight of the fall calendar at Manitou School in Philipstown. To prepare, students create papel picado, or pierced paper decorations, to honor people who have died.

“They symbolize that everybody will die eventually and that you shouldn’t be scared that they’re dead,” explained an elementary student named Gabriel. “You should be sad, but not very sad or scared.”

“It’s the day that the dead come back — to celebrate,” added a middle-schooler, Arjun. “You put out the dead person’s favorite foods.”

The children also created altars to “reflect what their dead relative enjoyed,” explained another middle-school student, Fia. “They have flowers and candles and food that the relative loved in their life. Sometimes cigarettes and alcohol, too.”

There’s a misconception that Dia de los Muertos is the Mexican version of Halloween, but that would be Noche de Bruja, or Witches’ Night.

As celebrated now, on Oct. 31, children make an altar dedicated to angelitos (spirits of dead children) inviting them to come back for a visit. On Nov. 1, the adult spirits are sought. On Nov. 2, All Souls Day, families go to the cemetery to decorate the graves and tombs of their relatives. Scattered marigold petals guide wandering souls back to their place of rest. The intent is to encourage visits by the souls, so that the souls can feel remembered by those still living.

A group of middle school students spoke to The Current about the holiday.

What is Dia de los Muertos?

Helena: “It’s the mixing of indigenous traditions and the conquistadors. Indigenous people were still practicing their religions in secret at the time of the conquest.”

Erris: “Because the indigenous people used to give offerings to the dead, and would pray for the dead, so the conquistadores combined their ways into the new religion.”

Clara: “It’s a cultural holiday, not a religious one. We read a history of Dia de los Muertos in Spanish, and then we learned about how it’s celebrated nowadays.  Our Spanish teacher is Mexican, so we heard her account.”

Clara: “It’s about letting the dead in. In Mexico, death is a much more open topic.  In the U.S. we even use different terms, like passed away, as substitutes for died.”

Helena: “It reflects an understanding that life doesn’t last forever, and that helps you enjoy what little life you have.”

What foods are associated with the holiday — and why?

Arjun: “There’s a whole lot of bread — and also food that the dead person liked”.

Fia: “There’s bread shaped like a skeleton made by rolling out dough into different bone shapes.”

Arjun: “There are also skulls made out of sugar”.

Fia: “You can offer it to a dead person, or to someone who is alive.”

Helena: “You give someone something that symbolizes death but it actually means you are wishing them a long and happy life.”

Fia: “The tradition of giving the skulls comes from the indigenous tradition of sacrificing actual skulls to their god.”

How about the calaveras (skull) poems? What are they?

Clara: “Basically lots of times when people had a very strong opinion about something that people found offensive, they’d write a poem about it; it’s a disclaimer.”

Arjun: “It’s like things you can’t say in public, but you put it in a poem.  Sometimes you have to have a certain number of syllables in a line.”

Clara: “It’s also speaking out about the government.  Also on Dia de los Muertos, it’s a way of talking about death.”

Fia: “The poems don’t always have to be serious; children can write them as well.”

Clara: “They will actually stay up all through the night building the altars, and in the morning have a huge party where they tell stories about the person. By doing this it’s like they have lived life to the fullest.”

What’s special about celebrating this tradition?

Arjun: “It’s a fun experience to experience holidays that take place other places. It’s interesting with our staff, because they come from all over, including Mexico.”

Helena: “Learning Spanish isn’t just the language or vocabulary, but about all the cultures.”