“It’s my understanding that the people who put us in this office did so anticipating that we would be good stewards in our roles as legislators,” she said before the vote. “People have given us the responsibility of spending their hard-earned tax dollars in the best way possible.”

Montgomery criticized how requests for funding were discussed and “for the most part, moved into the proposed budget with very few changes.”

She said her questions on certain matters were left unanswered. “My questions were met with resistance by this Legislature; I found this to be incredibly curious,” she said.

Specifically, she criticized salary increases, noting that the commissioner of health earns more ($185,966 annually) than his counterparts in Rockland ($177,056) and Orange ($144,200) counties, each of which has more than three times the population of Putnam, as well as Westchester ($173,860), which has 10 times the population.

She said there are usually three reasons to hand out raises: inflation, competition in the marketplace, and merit or an increase in responsibility.

“However, because we have eliminated certain programs and employees, the [health] commissioner actually has fewer responsibilities than before,” said Montgomery. “Yet, in this budget, we’re giving that position a raise. How is this responsible decision-making?” 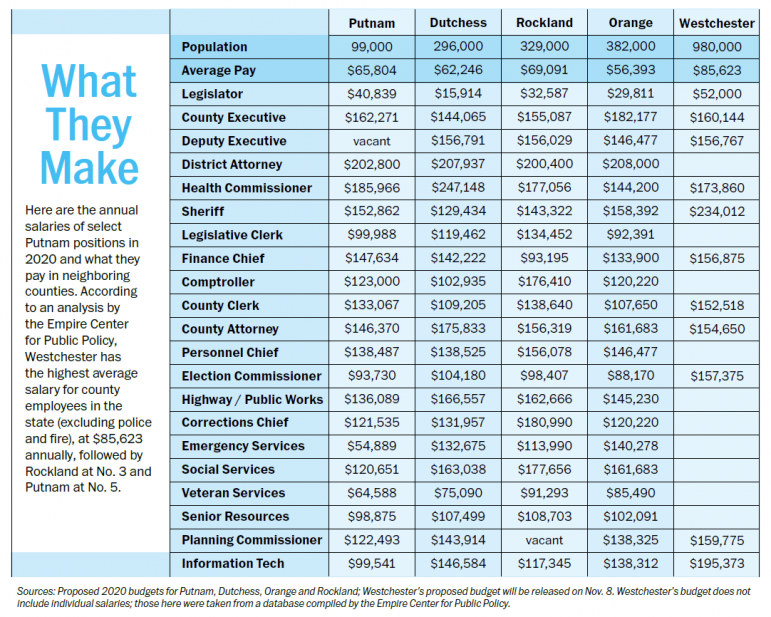 At a meeting of the Legislature’s Personnel Committee on Oct. 15, Montgomery said: “I represent people whose median household income is $99,000 a year, and whose personal income is $44,000 a year, and I will get comments from my constituents about some of the salaries that are being offered.” She added that “this is no way a personal issue” with whomever holds the job(s).

She also pointed out that the county executive will be receiving a 2.5 percent raise, to $162,271, even though that position pays more than it does in each of three surrounding counties that are larger in population and geographic area. In Rockland, the county executive earns $155,087, in Dutchess, $144,065, and in Westchester, $160,144.

Legislators did not receive raises; each earns $40,839 annually except for chair Joseph Castellano, who earns $49,798.

Montgomery’s comments on the budget were in stark opposition to those of her Republican colleagues. 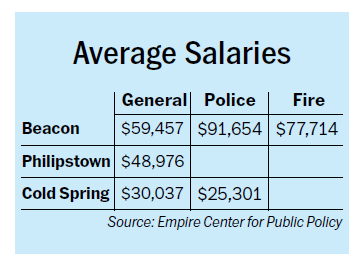 Sullivan said the county has managed to keep taxes low while providing critical and mandated services.

“We have diligently reviewed the budget for cost savings wherever possible while continuing to invest in and support our employees, our outside agencies and our residents, all while improving our county facilities and roads and bridges, to name just a few items,” he said. “There’s no fluff, there’s no malarkey in this year’s budget.”

Legislator Carl Albano (R-Carmel) said he was also proud of the 2020 budget.

“I’m glad that eight legislators believe it’s a good budget,” he said. “I’m kind of saddened by the fact that after this budget process is finished we have negative things to say, and other things that should have been addressed.”

Legislator Ginny Nacerino (R-Patterson) said the reason few changes were made to the county executive’s proposed spending is because it was a “barebones budget” from the start. “We were handed a good budget to begin with,” she said.

Castellano (R-Brewster) called the budget “outstanding,” while recognizing that county employees are still working without contracts. “Hopefully [that] will be settled in the very near future,” he said.

The Legislature put four items in the budget on temporary hold, including $15,000 for maintenance in Parks and Recreation; $30,000 for special services in the District Attorney’s office; $15,000 for license plate readers requested by the Sheriff’s Department; and nearly $18,000 for the promotion of a sheriff’s deputy to sergeant.

The highest-paid municipal employee in the Hudson Valley, and the state, is Brad Weidel, the police chief of the Town of Ramapo (pop. 138,000), in Rockland County, who earned $403,650 in 2018-19, according to the Empire Center for Public Policy. That included a base salary of $225,000 plus overtime, a longevity bonus and payment for accrued hours such as compensatory time, vacation time and family emergency time.

The Personnel Committee said it has asked the Sheriff’s Department to clarify whether the promotion involves a patrol officer or a school resource officer, whose salary is partly paid by the school district.