Before the U.S. entered World War I in 1917, Hamilton Fish III and Clinton Peterson had little in common besides the fact both lived in Putnam County.

The “war to end all wars,” which killed 8.5 million people, brought them together on the battlefield.

Peterson was born in Kent in 1891. By the time he was 9 years old, eight of his 10 siblings had died and the family was living in the county poorhouse, now the site of Veteran’s Memorial Park. They were the only black family in Kent.

Peterson’s formal education ended in the sixth grade. He worked as a chauffeur and handyman and, at age 25, joined the newly formed 15th New York Infantry National Guard (Colored). The unit became part of the U.S. Army’s 369th Regiment (Colored), known as the Harlem Hell Fighters.

On Monday, Nov. 11, at 11 a.m., veterans in Beacon will hold a ceremony at the Memorial Building (413 Main St.) and in Cold Spring at the war memorial on Main Street at Chestnut. A ceremony at Broad and Main in Fishkill will be followed by a tribute, ceremony and luncheon at All Sport, 17 Old Main St.

Peterson went to war in December 1917 aboard the USS Pocahontas, arriving in France after 18 days at sea. By then he was a sergeant in K Company.

K Company happened to be commanded by Hamilton Fish, who that month turned 29, having been born in Garrison in 1888. His father served in the U.S. Congress; his grandfather had been New York’s governor and the secretary of State under President Ulysses Grant. A captain, Hamilton Fish III was a Harvard graduate and member of the College Football Hall of Fame. 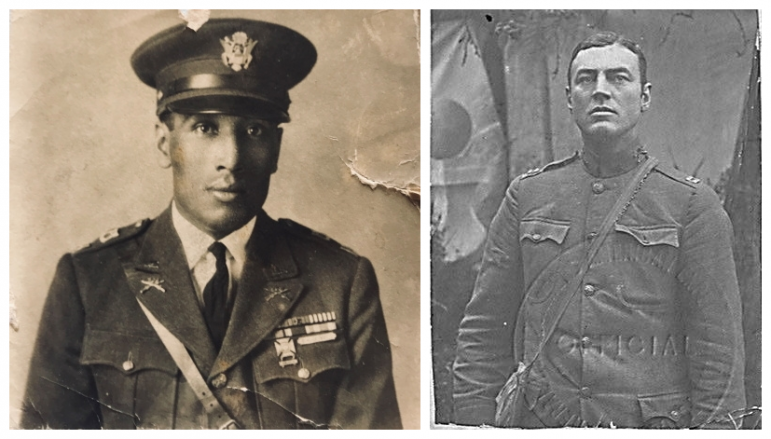 The two men would serve together for 191 days on the front lines, the longest any American regiment spent there. It was the first to advance to the Rhine River.

Based on Fish’s recommendation, Peterson was awarded the French Croix du Guerre for bravery during a battle at Sechault, France. The citation described Peterson, under heavy machine gun fire, attending to the wounded despite “the cautions of all to seek cover.”

The two sometimes experienced the worst of the war shoulder to shoulder. During a German artillery attack, they witnessed the deaths of several soldiers  who were caring for the wounded.

“Four men carried the stretchers and another put the wounded man on his back,” Peterson wrote. “Everyone was in the dug-out except Capt. Fish and myself” on a nearby hilltop. A shell came in low and exploded, producing a cloud of smoke. “When it blew away, all that could be seen was a mangled mass of what had but a moment before been men.”

Richard Sears Walling, a historian who edited Clinton Peterson’s wartime recollections into a book, My Year in France, appending letters by Fish, will speak at the Desmond-Fish Public Library in Garrison, on Thursday, Nov. 14, at 6:30 p.m.

Beyond artillery, aerial, gas and bayonet attacks, disease and unfathomable mud, the soldiers also dealt with hunger. During one six-day trek, Peterson’s company was exhausted and down to its emergency rations.

“Capt. Fish came up with two loaves of bread,” Peterson recalled. “Before he could take the bread from under his arm, it was taken and eaten by the half-starved men.” (It turned out the captain had 100 more.)

Even the rare lighter moments were inevitably spoiled. Peterson recalled his delight at meeting a young woman from New York City who worked in a shop 2 miles from the front line. Happy to have a conversation in English, he quickly learned that her French husband had been killed in action. 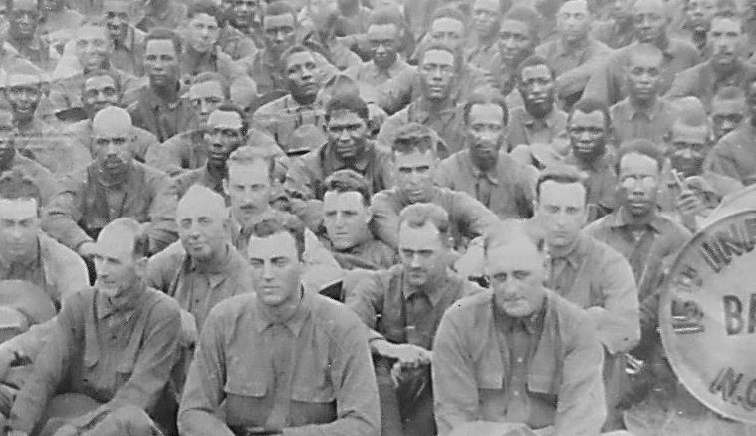 Fish had great respect for Peterson and the other black soldiers under his command, although his praise was qualified at times. In one of his frequent letters to his father, he referred to the 369th as the “most envied” U.S. regiment in France.

“I am a great believer in the fighting quality of the educated American Negro, provided he is well led,” he wrote. “If the regiment does not make a splendid record, it will be the fault of the [white] officers.”

“It seems almost a dream,” Fish wrote. “I am glad the killing of human beings is over and hope that it will be a lost art in the future.”

Peterson recalled cautious jubilation. “Germans began climbing out of their trenches yelling like mad, giving our boys cigarettes, cigars and souvenirs,” he wrote. “Our men remained at their posts until they were sure the Germans had no weapons.”

Fish and Peterson stayed connected after the war. Peterson worked as a foreman on Hamilton Fish Sr.’s farm in Garrison and lived with his mother on the Fish estate. 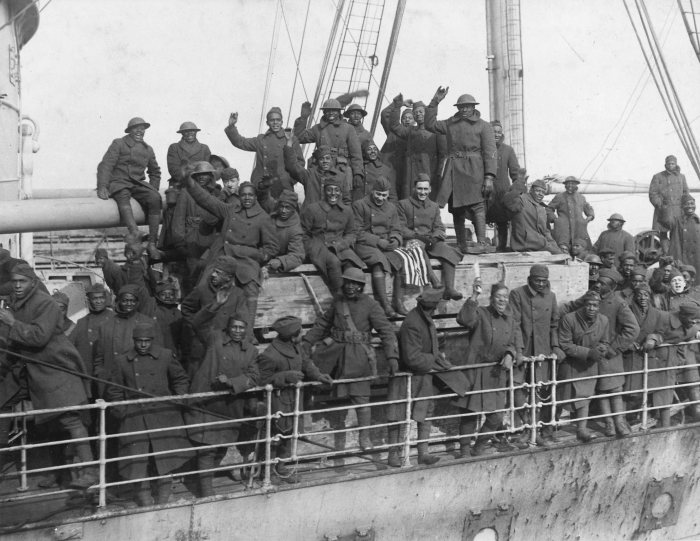 Men of the 369th head home in 1919 aboard a transport ship. (National Archives)

In his autobiography, Fish wrote about his squad’s bravery and noted that while they had been equals on the battlefield, the black soldiers were not treated that way back home. “I told my men, ‘You have fought and died for freedom and democracy,’ ” he recalled. “‘You should continue to fight for your own freedom and democracy.’ ”

Fish received the Silver Star and Croix de Guerre for his service and, along with his sister, Janet, who served as a nurse near the front, was inducted into the French Legion of Honor. He served in Congress from 1920 to 1944 and as a rookie congressman introduced legislation that created the Tomb of the Unknown Soldier in Arlington National Cemetery. He died in 1991 at age 102 and is buried in the St. Philip’s churchyard in Garrison.

Peterson died on July 4, 1945, at age 57 and is buried in the Long Island National Cemetery.