Bernadette Gorman-White, who manages the Story Screen Beacon Theater and is the co-host of its monthly movie trivia nights, says she has learned from experience how to write a good question.

“If I get into the weird places, the niche categories, people don’t know the answers and get frustrated,” she explains. “I like to write a round where each category is themed, either in the answers, or how the questions are worded. I like getting into a rhythm where if and when people can pick up on the trend, they’ll be able to return to questions they left blank. Good trivia is about 60 percent of the questions being fun and easy, 10 to 15 percent in which most everyone knows the answer but has to go back in their memory, and 25 to 30 percent that are deep dives, where you can pat yourself on the back with an ‘I knew that.’ ” 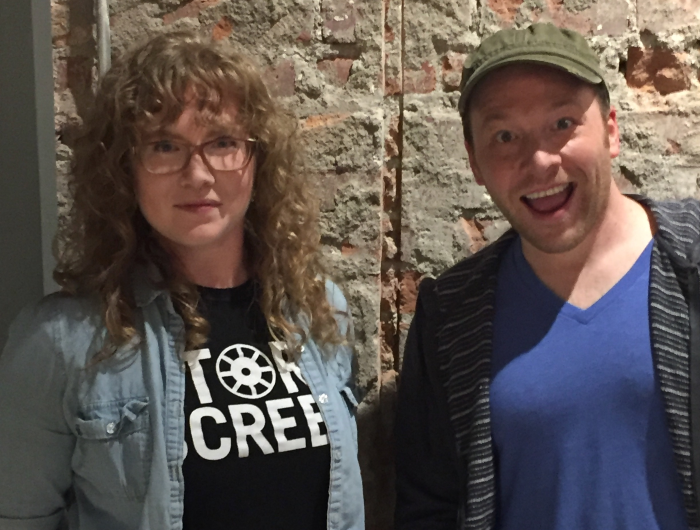 Bernadette Gorman-White and Mike Burdge (Photo by A. Rooney)

Gorman-White co-hosts the trivia nights, which began in August and take place every second Tuesday, with the theater’s founder and programmer, Mike Burdge. They research, write and read the questions as well as select accompanying (and often subliminal, clue-revealing) music.

Burdge had led trivia nights around town before Story Screen opened, and Gorman-White ran others with her husband at the 2 Way Brewing Co. She says some regulars followed them both to Story Screen.

Each contest has three rounds, with 10 questions in each, with each co-host writing five. For example, the first round on Tuesday (Nov. 12) was called “Chilly Movies”; each answer had a connection to a cold environment.

As part of the second round, Burdge presented video footage he had assembled of opening credits that were enlarged enough to be partially obscured. Burdge suggested listening to the “music and tone” to identify them. (This was not easy.)

Do You Have What It Takes?

In the 2003 Pixar film, Finding Nemo, our titular character, Nemo, voiced by Alexander Gould, finds himself in a fish tank at a dentist’s office, filled with colorful characters known as the Tank Gang, led by Gill, a Moorish idol fish. What actor plays the voice of Gill?

In the 1997 James Cameron film, Titanic, how does Jack Dawson (below) get his tickets to board the titular doomed ship? 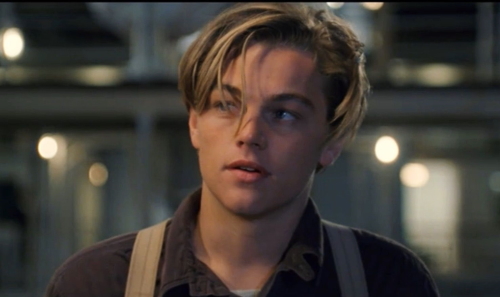 In Guillermo del Toro’s 2017 film, The Shape of Water, Sally Hawkins’ character, Elisa, falls in love with a mysterious amphibian man who has been captured by the government. What actor played this so-called Fish Man, who is also known for his physical performance work as Abe Sapien from the Hellboy movies, Saru from Star Trek Discovery, and his upcoming role as Count Orlok in David Lee Fisher’s remake of Nosferatu?

In the Star Wars films, Tatooine is the desert planet, Hoth is the snow planet and Endor is the forest planet. In Attack of the Clones, what is the name of the ocean planet where Obi-Wan Kenobi discovers the cloning facility?

In this 1998 Barry Levinson joint, Dustin Hoffman, Sharon Stone and Samuel L. Jackson attempt to unravel the mystery of an alien life form that has appeared in the middle of the ocean.

In 2009’s Cloudy with a Chance of Meatballs, Bill Hader lends his voice to Flint Lockwood, an amateur scientist who works with a lab assistant named Steve. What type of animal is Steve?

When a catastrophic winter storm wreaks havoc in 2004’s The Day After Tomorrow, which New York City landmark provides refuge for students Sam, Laura and JD?

In 1996’s Twister, Helen Hunt (below) plays Dr. Jo Harding, a meteorologist and storm chaser who has helped to develop a tornado-research device that releases hundreds of sensors into the eye of a storm in order to gather data. What name is given to these research devices? 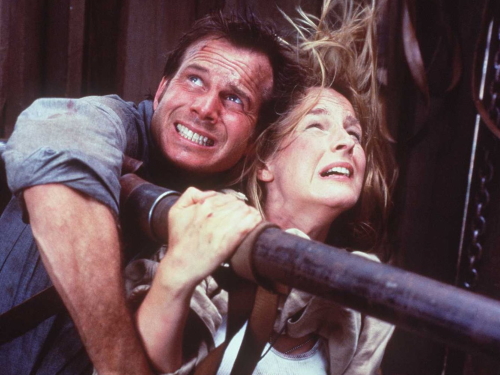 The Dueling Cavalier is a fictional film that is intended to propel actors Don Lockwood and Lina Lamont into the world of talkies and movie stardom. What 1952 film follows the hijinks that ensue while trying to make The Dueling Cavalier?

Not to be confused with John Carpenter’s The Fog, Stephen King’s 1980 novella The Mist was adapted into a film in 2007. What other weather-based Stephen King story was adapted in 1999 for a three-part miniseries on ABC?

Each team of up to six people records their responses on printed answer sheets. Scores are tallied between rounds, and prizes awarded. A bonus round involves naming the actors, characters, director and/or film based on photographs.

The grand prize is nifty: you can bring up to 20 of your friends to a screening of a movie of your choice before the next Trivia Night.

Gorman-White, who majored in film studies at DePauw University in Indiana, says she tries to keep her research sources “fairly diverse” and notes that “Mike asks broader trivia. I try not to pigeonhole my trivia into a specific mind frame or era. We don’t head into the classics as much as we could but we’re trying to become more wide-ranging.”

Of the regulars, she says: “There are certain teams that definitely know film, which keeps us on our toes. But we also get people who have never played. It can go from a vibe that only one team knows these questions to tables where they hardly get anything correct but have a great time.”

The Story Screen Beacon Theater is located at 445 Main St. The next Movie Trivia Night is scheduled for 8 p.m. on Tuesday, Dec. 10. The entrance fee is $20 for each team of up to six people, which includes a large bucket of popcorn. (Individuals and couples can play solo or join an existing team.) The concession will be open to purchase snacks, candy and beverages.