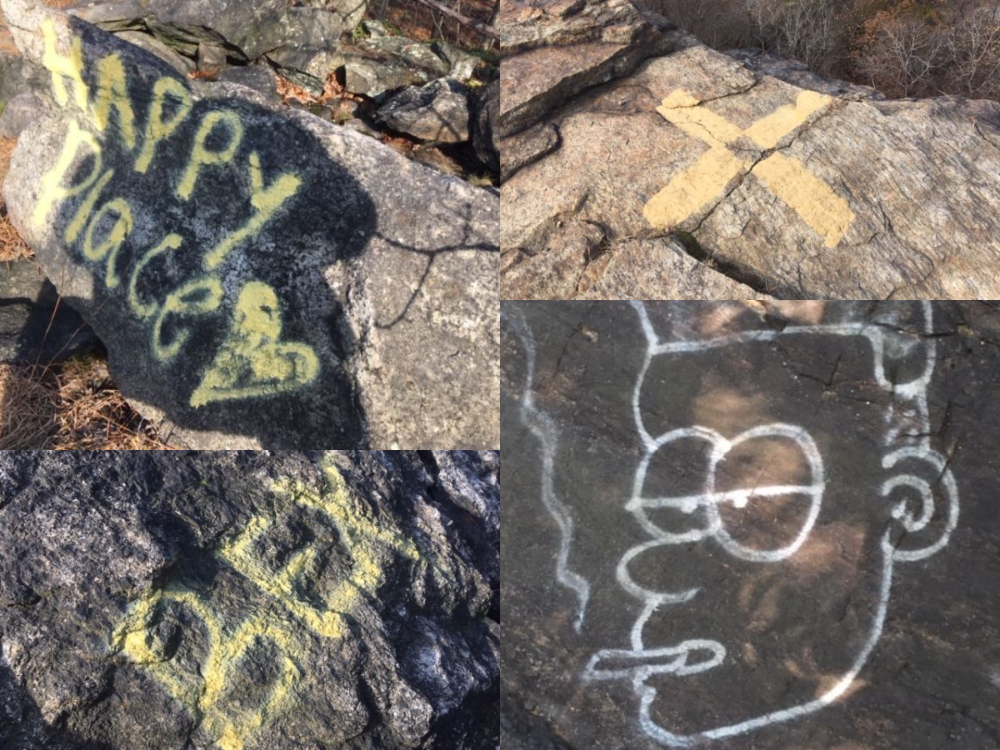 BEFORE -- Graffiti at Little Stony Point (Photos by Laura Bergman)

Tens of thousands of people — and maybe hundreds of thousands — pass through Little Stony Point, Breakneck Ridge and other Highlands hiking destinations each year.

The vast majority are respectful, following the “leave-no-trace” rule. But occasionally someone will drop trash or, perhaps, decide a rock would look better with a fresh coat of spray paint.

Unfortunately, it never does.

It’s a troubling situation for the staff of the state Office of Parks, Recreation and Historic Preservation, as well as for hikers such as Cold Spring’s Laura Bergman. 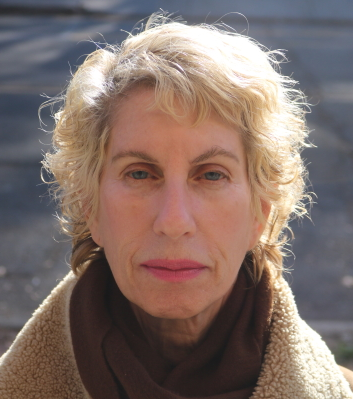 Bergman is a decorative painter who, with the blessing of the state, has been remediating graffiti at Little Stony Point, one rock at a time. She doesn’t use a sandblaster or harsh chemicals to remove the stains, but instead disguises them to blend into the background so the rock again looks like a rock.

The idea, she said, was born in a meeting of the Friends of Fahnestock and Hudson Highlands State Parks, a volunteer group.

“The graffiti is so blatant and horrible,” Bergman said. “It’s a small space and there’s so much of it. But this is something I knew I could do. I know how to disguise things.”

In one spot, along a rock wall near the entrance to Little Stony Point, a vandal spray-painted “Happy Place” and a heart in yellow paint [above]. It took Bergman, who uses oil-based paint mixed with a glaze and a splash of turpentine, about an hour to cover it using a half-inch bristle brush.

While the natural world is indeed a happy place, parks officials say they’re hopeful that Bergman’s efforts will dissuade other would-be outdoors artists.

“I’ve found that when people see something maintained, they’re respectful of those places,” said Declan Hennelly, the assistant park manager at Fahnestock. “They will also disrespect places that have been disrespected. People tend to follow along.” 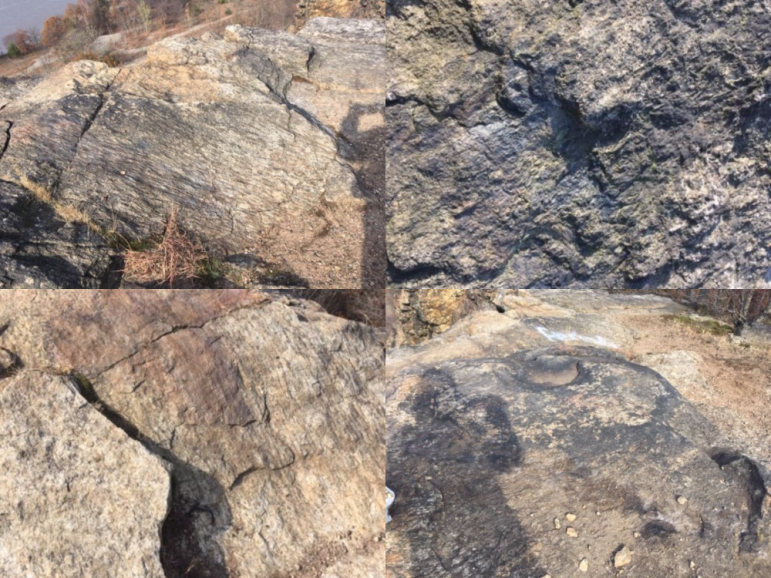 AFTER — Graffiti after being covered by Laura Bergman

Fred Martin, the president of the volunteer Little Stony Point Citizens Association, said that vandalism can destroy the same qualities that draw people to the outdoors. He cited a friend, a firefighter, who lost his entire crew on 9/11.

“Graffiti-makers need to know that they destroy nature’s ability to heal people who seek solace and rejuvenation in our parks and public places,” Martin said. “When kids understand the impact of this destruction, I bet they may decide not to do it. I don’t think they know they are doing real harm.”

Bergman says she’s spent about eight hours painting over graffiti at Little Stony Point in the last three months. If her paint survives the winter, she said she’ll return in the spring and train other volunteers.

“It’s been a fun job,” she said. “I don’t know what else I could do; I feel like this is my contribution to the parks.”

Jeff Simms, the Current reporter who wrote this story, is a board member of the Friends of Fahnestock and Hudson Highlands State Parks.

One thought on “Now You See It, Now You Don’t”