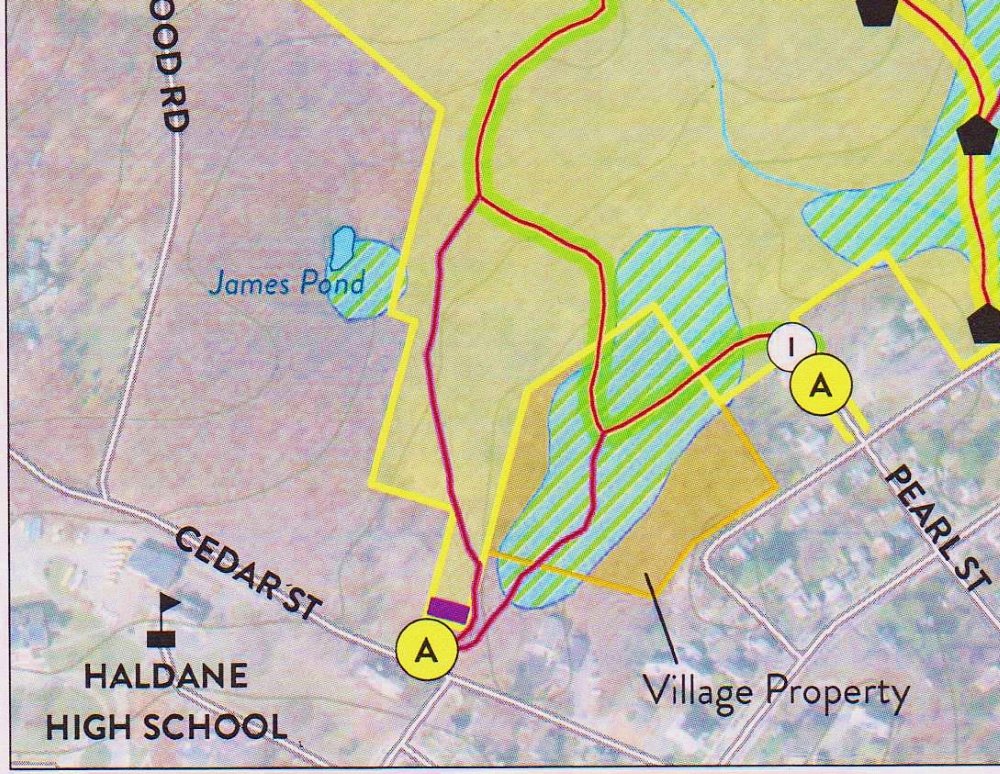 The village-owned parcel that the board suggested in 2017 might work for a cell tower appears in dark yellow, with wetlands in green through the center. (OSI)

A recharged debate this month over a Nelsonville-owned parcel featured old arguments and a new assertion — that village officials in 2017 proposed putting a cell tower there only as a maneuver, suspecting it would go nowhere because of public opposition.

Two years ago, then-Mayor Bill O’Neill and then-Trustees Thomas Robertson and Alan Potts suggested the 4-acre parcel on Secor Street as an alternative site for a 110-foot tower proposed by Homeland Towers for Rockledge Road, overlooking the Cold Spring Cemetery.

The board dropped the idea after a fierce outcry. The Zoning Board of Appeals subsequently refused to issue a permit for the Rockledge location and Homeland and Verizon sued Nelsonville in a case that remains pending in federal court.

At a workshop on Nov. 13 and the board’s regular meeting on Nov. 18, residents engaged in spirited discussion of the Secor Street plot.

The proposed conservation easement addition would begin at the edge of Secor Street. (File photo by L.S. Armstrong)

The board, which took no action at either session, and whose current members all came to office after 2017, has been considering an agreement with the nonprofit Open Space Institute to add the Secor parcel to the adjacent 112-acre Nelsonville Woods, which is protected from development by a conservation easement. Adding an easement to the 4-acre parcel would “take it off the table” for a cell tower, noted Mayor Michael Bowman on Nov. 13.

From the audience, Potts objected to “this insinuation that what we did was wrong” in 2017 by flagging the parcel as a possible tower location. He said the idea took shape after Homeland Towers contended that no suitable location for a tower existed in Nelsonville except on Rockledge.

To rebut that claim, the Village Board “made a calculated decision proposing Secor, knowing it would never, ever be built” there because residents would object, Potts said. “We had a reason for doing it: to take away the argument from Homeland that there was not an alternative [to Rockledge]. They really wanted that property” on Secor, he said. “But we did the honorable thing. We brought it to the people and the people said ‘no,’ and we immediately backed away.”

Potts criticized “this rubbish about the previous administration targeting the property. The misperception here is that we intended to do that. And we did not.”

Bowman responded that “if there was really no plan for Secor as a viable spot for a cell tower,” at a 2017 meeting the Village Board had “one hell of a poker face, because probably a half dozen to a dozen neighbors of that property were hiring attorneys the next day.”

One resident, Jennifer Young, said she “personally did not appreciate being used as a pawn. I spent thousands of dollars, along with a lot of neighbors” hiring attorneys. “Actually, that infuriates me, that there was even a plan of ‘Oh, let’s come in and pretend we’re going to give this over’ ” for cell tower use.

“It took a lot of village input” to thwart the 2017 cell tower plan as well as one years earlier for senior housing on the Secor acreage, resident Mary Rice recalled at the workshop on Nov. 13. “I don’t look forward to any other fights about what might be proposed.”

The Secor land “shouldn’t be developed,” not even for a modest village building, which the draft agreement with the Open Space Institute would allow, she said. Rice observed that among other attributes, the Secor site contains wetlands, “our security against flooding” of nearby properties.

Others warned that granting OSI oversight of the Secor site would, in effect, be giving away something valuable.

The parcel “could be useful for us down the road,” perhaps for a village well system, since at present “our water is controlled by Cold Spring,” said resident Gloria Van Tassel.