But after a heartbreaking 25-18 loss in a tiebreaker versus Section 4’s Panama on Saturday (Nov. 23), the Blue Devils had to settle for third in the state. Candor, of Section 6, went on to win the title.

“After we lost that first set to Panama, we knew we had to win the next one, or our season was over,” said Haldane coach Kelsey Flaherty. “In the second we rallied back and forth to 31 points — and that’s unheard of.” 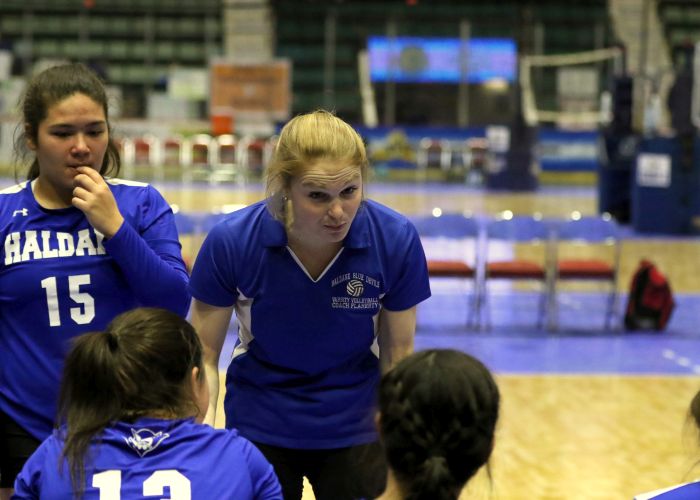 Panama scored the first seven points in the tiebreaker, putting the Blue Devils in a huge hole, “mostly due to unforced errors,” Flaherty said.

However, “the whole experience was really awesome for the girls,” she added. “It didn’t turn out the way we wanted it to, but I’m so proud of how far they came. Third in the state is really impressive. I couldn’t be more proud.”

“Sofia was one of our better players,” Flaherty said, “and I’m glad Maria will be back. She has a great personality on the court, and she’s a hard worker.”

Haldane will lose six players to graduation, including four starters. “We lose half the team, so there are some big shoes to fill,” Flaherty said. “But I think we have some players back who can step up and be starters. We could have another good year, but it will take a lot of hard work.”

Flaherty said this year’s team had an idea when it began play in September and it came to fruition.

“Even though we lost at states, from the beginning they had a goal of [reaching statewide play], so they knew what they were walking into,” she said. “I’m very proud of how they performed. It was their first state tournament, and they got themselves there and played with passion. I knew they could do it from the start, and so did they.”