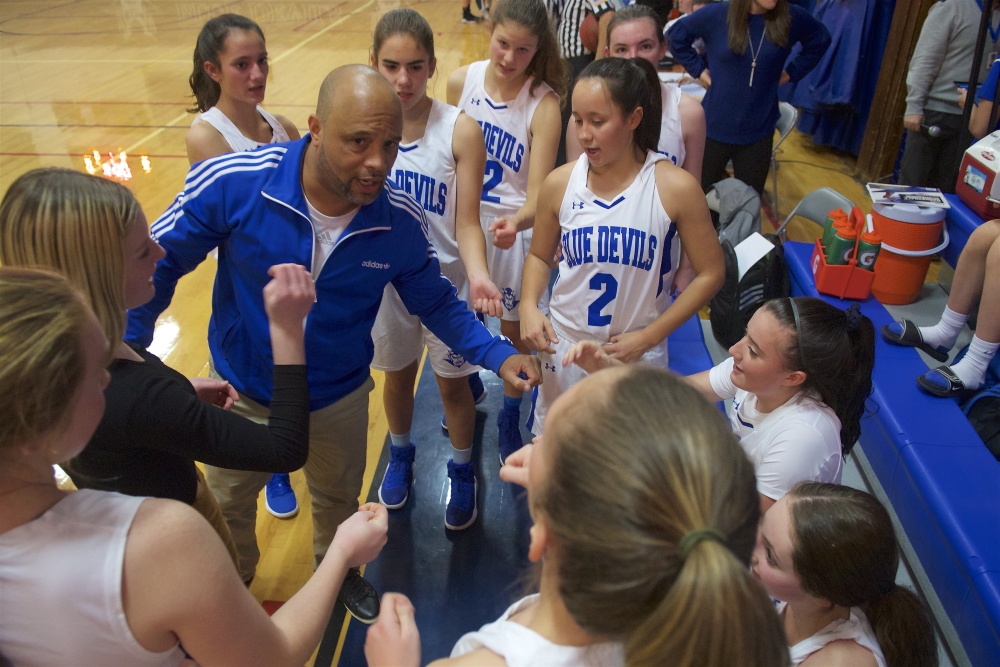 Coach Tyrone Searight with the Blue Devils team a year ago. (File photo)

Initially charged with three felonies, Tyrone Searight, the longtime coach of the Haldane High School varsity girls’ basketball team, pleaded guilty to disorderly conduct on Nov. 26 after being accused of defrauding the state workers’ compensation system. He also paid nearly $17,000 in restitution to the Metropolitan Transportation Authority, which employed him as a bus driver.

Haldane Superintendent Philip Benante said on Wednesday (Dec. 4) that he planned to recommend to the school board at its Dec. 17 meeting that Searight be fired.

Searight, who coached the Blue Devils for 11 seasons, has been on leave since his Oct. 29 arrest. The junior varsity coach, Jessica Perrone, was assigned at the time to coach both teams, and Athletic Director Chris Salumn said in a letter to parents on Dec. 4 that she would continue to do so for the 2019-20 season. The varsity girls were scheduled to play their first game today (Dec. 6) at Bronxville.

Searight said in an interview that Benante asked him to resign but that he declined. “They were questioning my character of being around the girls,” he said. “I jumped through hoops to get the best situation in my case.” He said he planned to seek legal advice on how to proceed and would “make an effort to be at the board meeting to see what is presented to them.

“My case should never have gone to court,” he added. “It should have been handled outside of court. I know deep down I didn’t do anything wrong. I made a mistake on a form because I never thought of Haldane as a ‘job’ — it’s my passion. I support everything at the school, go to all the events, spend 12 months of the year working with basketball.”

Searight, who lives in Peekskill, pleaded guilty in Town of Ramapo Court to a single count of disorderly conduct, a violation. The state Offices of the Inspector General, which investigated the case, said Searight was prosecuted in Ramapo because he had a medical exam there related to his claim.

The coach earlier directed questions about his plea to his attorney, Michael Borrelli, who said in a statement: “On Nov. 26, Tyrone Searight’s matter that was pending in Ramapo Town Court was concluded without Mr. Searight being convicted of any crimes [i.e., a misdemeanor or felony]. Mr. Searight is happy that the case is over and looks forward to getting back to coaching.”

The state inspector general said Searight reported a work-related knee injury to the MTA in November 2016 and collected worker’s comp until May 2017. However, investigators said they found that while Searight claimed he wasn’t able to work, he continued to coach at Haldane and did not appear to be seriously injured.

“Video surveillance showed Searight bending, squatting, pacing, waving his arms and abruptly standing up from the sidelines at several games,” the inspector general said in a statement.

Prior to appearing in court on Nov. 26, Searight paid $16,912.92 in restitution to the MTA, which fired him based on the state findings.