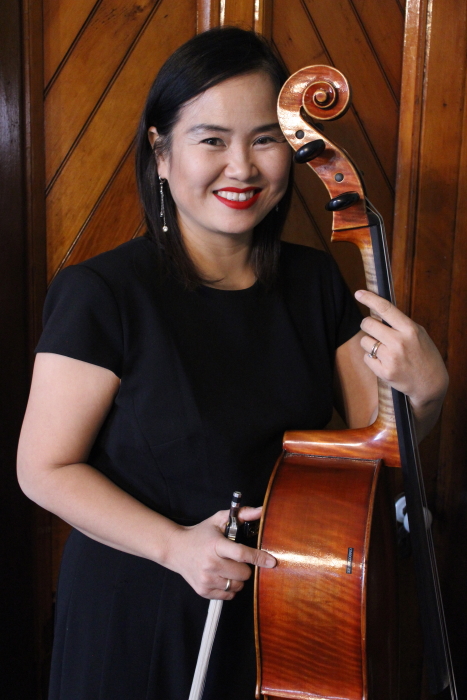 Choi Fairbanks (Photo by A. Rooney)

Choi Fairbanks of Beacon created a cello choir that will perform at 7 p.m. on Monday, Dec. 16, at the Howland Cultural Center.

When did you begin playing the cello?

I grew up in South Korea, where my dad was a trumpet player. There were three of us girls — one played piano, and the other violin. I was the last one and didn’t have a choice! At college, there was an exchange program between my school and the University of South Florida; that’s what brought me to the U.S. My husband plays trombone and is a jazz composer and he won a residency in New York City, and that’s why we came here. Before we moved to Beacon, I formed a string quartet that played in Greenwich Village every Monday night for five years at the Fat Cat. It was challenging but super-fun, playing Shostakovich in a bar.

What do you love most about your instrument?
When you play it, the sound it makes, how it makes you feel, is so close to my heart it’s like my inner voice. The range is close to a human voice, so you sing out through the cello. It resonates.

Did you seek out other musicians after your move?
Definitely. We moved up to raise our kids somewhere with a river and mountains, and diversity. I’m a cellist. I needed to meet people and play with them. I decided to do something about it, and went around picking up all the flyers for things like violin teachers that I could find, and I called them, asking if we could meet. I found musicians on Facebook, too. A lot of musicians want to play, but without opportunities, they have to go to the city. Why not in Beacon? I invited them all to [music]-reading sessions at my house and eventually named the group the Beacon Chamber Ensemble. We did concerts at Chill Wine Bar.

How did you end up with only cellists?
One day just cellists came and I got the idea. It can be a quartet or trio. If more than four people come, we double up on the one part. People who came to our last concert said they’d never heard such things in their life. In an orchestra you hear everything, but in a cello choir, everything is in this low register and there’s harmony. It’s like four baritones singing together.

Can cello be daunting for kids to learn to play?
Sometimes the cello helps kids who can’t calm themselves down. Some children never have alone time ­— the silent moments — and the cello makes them feel special, maybe because of the low sound, the slowness. When I introduce the cello to a child, I make comparisons to the human body: this is the shoulder, the waist, the pegs are ears, the bottom is, well, the bottom, and the neck. The bow becomes the arm, and the end pin becomes the leg. It’s so different from a violin — it’s perfect!