Charles E. “Chuck” Hustis III, a former two-term Village of Cold Spring trustee and recent mayoral candidate, was arrested by the FBI on Monday (Dec. 16) and charged with attempted enticement of a minor to engage in sexual activity, according to federal officials.

Hustis, 36, appeared before a federal judge in White Plains on Monday on the charge, which carries a mandatory minimum sentence of 10 years in prison. He was represented at the initial court appearance by a federal public defender and released to home confinement on a $150,000 bond, according to the U.S. Attorney’s Office for the Southern District of New York.

The 2002 Haldane graduate, who could not immediately be reached for comment, served on the Village Board from 2010 to 2014 and also ran unsuccessfully for the Haldane school board in 2015. He challenged incumbent Mayor Dave Merandy earlier this year.

According to the complaint filed with the court, a 16-year-old male teenager notified the Putnam County Sheriff’s Office that Hustis on Dec. 8 and 9 sent him sexually explicit photos over Facebook Messenger and solicited him to meet for sex.

The teen told police that Hustis had been one of his substitute teachers. Hustis was certified by the state as a teaching assistant from February 2012 to January 2015, and in a statement issued Dec. 17, the Haldane school district said he had worked as a substitute teacher as recently as 2016.

“Please be assured that we will actively monitor” students’ reactions, Superintendent Philip Benante said in a letter to faculty and parents. “Out of an abundance of caution and respect for the emotional safety of our students and families who may be directly impacted by this matter, I am seeking your assistance in encouraging our children not to engage in any speculation about who may have been involved.”

In a Facebook exchange quoted in the complaint, Hustis initiated an explicit conversation with the teen, asking him how his school year was going and stating that he (Hustis) was “getting hit on by sugar daddies all the time” at the Foodtown grocery store in Cold Spring, where he is a manager. He also told the teen that he was “cute,” called him “sexy boy” and said that he had watched him playing sports at school, according to the complaint.

Hustis allegedly asked the teen how old he was, to which he replied, “16.” He also told the teen that there were job openings at Foodtown, “but since you are 16 you can’t legally work grocery till you are 18,” according to the complaint.

On Dec. 12, an FBI agent took over the Facebook account to continue the communications while posing as the teenager, according to the complaint. Hustis allegedly sent photos of his penis to the teen and later to the special agent, as well as photos of his face, including one that also had been posted on his Facebook campaign page during his run for mayor. 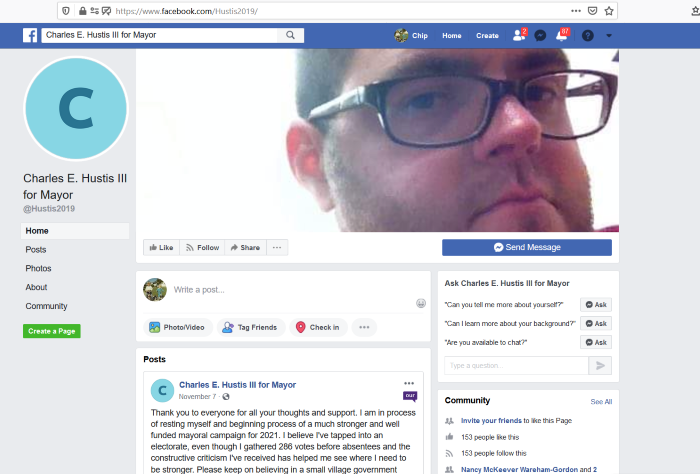 In addition, Hustis solicited photos from the agent (posing as the teen) and at one point wrote, “When you are off from school, I’ll invite you to my place for fun,” the complaint said. It also alleged Hustis said he wanted to meet at his apartment because “it’s illegal to have sex with a minor” and “I want to play this by the letter of the law to protect both of us.” (The legal age of consent for sex in New York State is 17.)

The agent, posing as the teen, agreed to meet Hustis in the Foodtown parking lot at 10 a.m. on Monday, which the agent told Hustis was during the teen’s “free period” from school, and walk from there to Hustis’ apartment for sex. Agents said they arrested Hustis in the parking lot when he arrived for the meeting.

The FBI said anyone with relevant information should contact the agency at 800-225-5324.