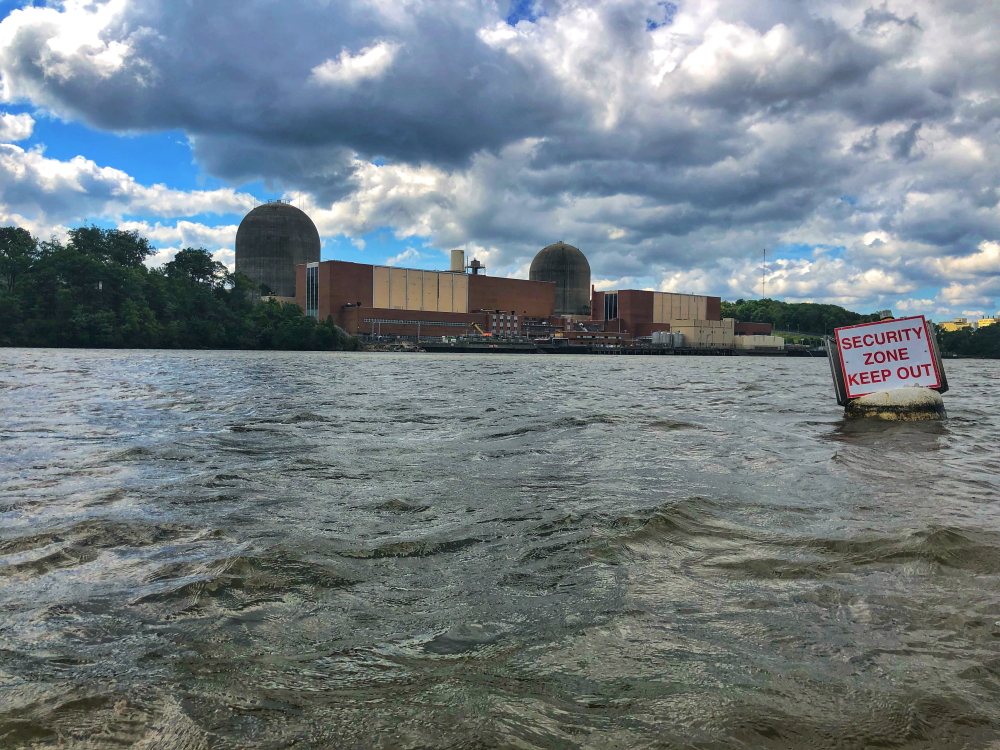 The Indian Point nuclear plant in Peekskill (Photo by B. Cronin)

Entergy is looking to the future of Indian Point and hoping that it no longer includes Entergy.

Last month, the energy company filed an application with the U.S. Nuclear Regulatory Commission to transfer its licenses to operate Indian Point to Holtec International after the shutdown of the last reactor at the nuclear plant, which is scheduled for April 2021.

Holtec would then begin mothballing the facility, using a $2.1 billion decommissioning fund that has been accumulated by Entergy during the life of the plant. Holtec also has said it would hire about 300 Indian Point workers.

“Entergy is in the power-generation business, and decommissioning is a line of work that we’re not involved in,” said Jerry Nappi, an Entergy representative. “Holtec specializes in the management of used fuel and its affiliates have special expertise in decommissioning. They can decommission the plant decades sooner than Entergy would be able to.”

Entergy’s original plan had been to take 60 years, the maximum time allowed by the Nuclear Regulatory Commission; Holtec plans to do it in 15. (Holtec did not respond to a request for comment for this story.)

The accelerated timeline doesn’t concern Richard Webster, the legal director for Riverkeeper, the Ossining-based environmental group. Many decommissioning projects start with a process called SAFSTOR, in which the plant is monitored for up to 45 years to give the radioactive materials time to decay and lower the amount of hazardous material. By skipping SAFSTOR, “15 years is a reasonable amount of time to do it,” said Webster.

Nevertheless, Riverkeeper has asked the Nuclear Regulatory Commission (or, failing that, Gov. Andrew Cuomo) to deny the transfer to Holtec.

“Our objections can be summed up as: Bribes, lies, poor safety record and under-capitalization,” said Webster.

Holtec is no stranger to controversy. In 2010, the inspector general for the Tennessee Valley Authority, a federal agency, found that Holtec had funneled $54,000 to a TVA manager to secure contracts. The firm was fined $2 million and barred from federal contracts for 60 days.

In Ohio, Holtec was awarded tax credits following a 2009 promise to bring 200 jobs to its facility in Orrville. But the jobs never appeared — in fact, the plant lost four positions — and the tax credits were rescinded.

Then, when applying for tax breaks in New Jersey in order to bring a facility to Camden, the company claimed that it had never been barred from working with federal agencies. To push New Jersey to grant the tax breaks, Holtec said Ohio and South Carolina had made generous counterproposals, an assertion both states denied.

Last year, a contractor at the San Onofre nuclear power plant in California, where Holtec has been contracted to manage spent fuel, brought to light an apparent near accident involving a dry cask filled with radioactive fuel. (Plant officials said there was never any danger to the public.) The worker also alleged the site was understaffed and its supervisors often replaced with less experienced managers.

Finally, on the financial side, Webster said he was alarmed at Holtec’s decision at the Oyster Creek nuclear plant in New Jersey, which has been decommissioning for less than a year, to transfer money from the decommissioning fund to spent fuel management, a move that Holtec has signaled it would also do at Indian Point.

“That’s not what that fund is for,” he said. “And there’s a complicated set of LLCs [limited-liability corporations] designed to shield Holtec International, the core corporation. We just don’t have much information about the financial viability [of the company]. If you were running a huge international business that was making money, you shouldn’t be so desperate to get tax breaks that you have to lie on a form.”

At Entergy, Nappi said that Holtec’s recent approvals from the Nuclear Regulatory Commission show that the issues raised aren’t of concern. “The NRC has approved the transactions for two previous nuclear power plants to Holtec, and that only happens if a company can demonstrate that it has the technical and financial qualifications needed,” he said. “We feel confident that Indian Point will receive approval.”

If that happens, Webster said he hoped that it would at least come with certain conditions, such as the creation of a citizens’ oversight committee with the power to (1) audit the decommissioning fund, (2) subpoena documents, (3) have specialists look at difficult situations, and (4) transfer questions of safety to the NRC.

At the least, Webster said, Holtec should not be allowed to keep anything that remains in the decommissioning fund at the end of the project, as it might encourage the firm to do the job as cheaply as possible at the expense of safety and other concerns.