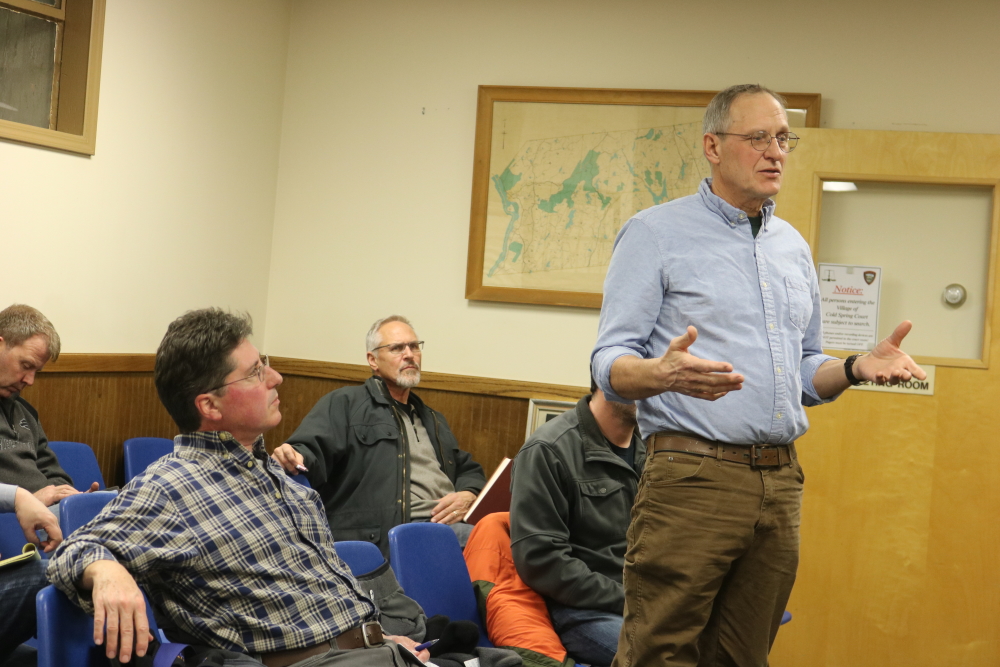 Fred Martin of the Little Stony Point Citizens' Association and Evan Thompson of the Hudson Highlands State Park discuss with the Cold Spring board the state's desire to tap into the village water and sewer systems. (Photo by M. Turton)

Evan Thompson, the manager of the Hudson Highlands State Park, told the Cold Spring Village Board on Dec. 17 that he needs “one last piece of the puzzle” to complete improvements at Little Stony Point.

Thompson asked that the state be permitted to tap into the village water and sewer systems about 700 feet from Little Stony Point.

The mayor said he is not giving a “hard no” to the proposed project but needs details on how much water new facilities at Little Stony Point would use. When the Cold Spring-to-Beacon Fjord Trail is completed, hikers on it would also use water at Little Stony Point, he noted.

Volume could be a problem he said, especially in light of the Butterfield redevelopment project, which, when complete, will use significant amounts of water.

Trustee Steve Voloto pointed out that drought conditions in recent years have lowered water levels in the village reservoirs.

Thompson estimates that up 1,500 people enter the park at Little Stony Point on peak days. He hopes to add two restrooms, one with two urinals and two toilets, the other with four toilets.

He said additional restrooms could take some of the pressure off Cold Spring shops, many of which limit use of the restroom to customers because of the many requests.

Little Stony Point has a well, Thompson said, but the water isn’t potable. Trustees discussed the possibility of using well water for the toilets, reducing the amount of village water that would be needed.

If the park is allowed to hook into both village systems, the state would pay the costs, Thompson said.

Merandy asked Thompson to return with more details, such as estimates of how much water Little Stony Point would use.

Improvements at Little Stony Point over the past two years have included paving the Washburn Trail parking lot, converting the caretaker’s house into a park office and the construction of a volunteer center by the Friends of Little Stony Point that will have its grand opening on Jan. 1.

■ Village Accountant Michelle Ascolillo reported that projected expenditures for fiscal year 2019-20 will be about $100,000 less than expected because costs have been lower than budgeted in areas such as medical insurance, pension contributions, attorney fees, worker’s compensation and shared services.

■ The Philipstown Behavioral Health Hub in Cold Spring is planning a 5K run and shorter fun run for May 17. David Marzollo, a member of the nonprofit’s board, said the run will follow the route used by the annual Turkey Trot, beginning at the riverfront bandstand. The shorter run will be held below the railroad tracks after the main race.

Marzollo said the event, a fundraiser, will also help promote the Hub’s mission, which is to provide mental health and addiction services. In its first six months, he said, the Hub has raised nearly $100,000. He will meet with Officer-in-Charge Larry Burke of the Cold Spring Police Department to discuss traffic control and return to the board with details.

■ Burke requested authorization to hire a temporary administrative assistant to organize older evidence files. No action was taken pending details about the cost.