The Rev. Henry Pah-tah-qua-hong Chase (Coming Thunder), a member of the Ojibwa [Chippewa] tribe of Canada who had converted to Christianity some 20 years earlier, visited Cold Spring as a guest of the rector of St. Mary’s Episcopal Church. The Anglican priest was raising money to build a chapel for the Oneidas near Syracuse.

A brainteaser that appeared in the Dec. 7, 1894, issue of the Cold Spring Recorder. Does it still work?

William Wells of Cold Spring wrote from Savannah, Georgia, to say that “the weather here is delightful. I am writing with the windows up and no fire. Savannah is a thriving city and a large amount of cotton is shipped from the port. Business is good in the South and everything quiet.”

In a quick trip, Capt. Bowne, of the schooner at Furnace Dock, left on Monday with a cargo of pig iron, unloaded at Brooklyn on Tuesday, shipped coal at Weehawken on Wednesday and returned to Cold Spring on Thursday at noon.

The first snow allowed Mr. Goodsell’s horse to pull a hand sled with three boys aboard who fell off every few rods but didn’t seem to mind.

A loaded pistol was found in the snow and taken to the post office for its owner to claim.

A man who had been pelted with a snowball on Main Street got out of his sleigh and chased down one of the Curry boys on Furnace Street, bringing him back to Main Street by his collar. George Purdy, taking pity, intervened.

The Rev. David Gibson of the Highland Church and David Haight of Fishkill Road each came out in the morning to feed their horses and found them gone. The minister also lost his harness, blanket and wagon, and a neighbor of Haight’s, James Boyce, lost his wagon. A hypothesis was formed that the thieves took the preacher’s gray and his trappings and swapped wagons at Boyce’s and horses at Haight’s before heading north. A search party found the horse and wagon under a hotel shed at Channingville [Wappingers Falls], but the thieves had fled.

Henry Knapp of Breakneck Hollow smelled burning cloth but could not locate the source until he put his hands in his pockets and found some matches there with his pocketknife and keys that had burned the pocket and his pants and were starting on his drawers. 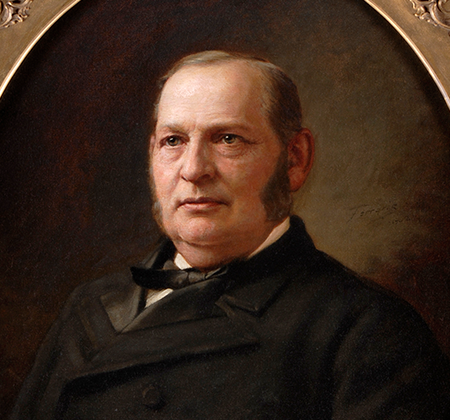 Gov. Roswell Flower commuted the sentence of John Trumpboar, who was convicted in 1871 for killing a man during a bank robbery in Cold Spring. Trumpboar, who was 20, threw red pepper into the eyes of a National Bank of Fishkill messenger at Main and Rock and grabbed his deposit bag, which had $8,000 in receipts collected from village merchants. When a coachman, Elijah Jones, gave chase, Trumpboar turned and shot him dead. He was serving a 40-year sentence but years earlier had applied for clemency for good behavior. His release was endorsed by 11 of the jurors who convicted him.

Mrs. William Nelson’s home on Fair Street received a new coat of paint, and the residence of James Ladue on Chestnut was improved by raising the second story.

J.G. Southard handed out 1895 calendars advertising the fire insurance companies for which he was an agent.

The large chimney at the old blast furnace was demolished with dynamite.

The Musical and Literary Circle of the Methodist Episcopal Church presented a musical drama, The Merry Milkmaids, at Town Hall.

Meg Merril [Merrilles], the “famous woman reporter of the New York World,” waved her handkerchief from a window of the Empire State Express No. 999 [claimed to be the fastest in the world] as it sped past Cold Spring on its way from New York to Albany. Merrilles was writing a story about the experience. [Meg Merrilles was the byline given to “girl” reporters at the World who did “stunt reporting” by editors who did not want any of them to achieve the singular influence of their predecessor, Nelly Bly.] 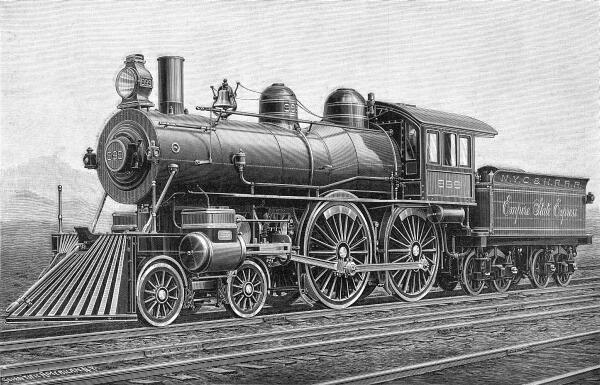 Matthew Quinlan was appointed as the Haldane truant officer at a rate of $50 annually, a position mandated by a law effective Jan. 1, 1895, requiring every child between 8 and 16 years old to attend school, and, further, that no child between 8 and 12 be employed while school was in session.

It was noted during a Haldane school board meeting that Cora Ellison, who taught the primary department, instructed 90 students, but state law only allowed 50 scholars per class.

Philip Reilley, a director of the National Bank of Cold Spring-on-the-Hudson, died at age 35 of peritonitis.

The flags were flown at half-mast at Haldane following the loss of its principal, LeRoy Z. Collins, 52, who dropped dead at home while taking off his overcoat. He had attended Philip Reilley’s funeral earlier in the day.

The Cold Spring Recorder quipped that “an inventive minister has devised a contribution box in which the quarters and halves land on a piece of velvet while the pennies strike a gong.”

The wife of Duncan Phyfe gave birth to a 15-pound baby boy. The husband, at least, was reported to be “all smiles.”

John McClary, an engineer at Thomas Edison’s concentrating iron works in New Jersey, was at home in Cold Spring for a holiday visit. 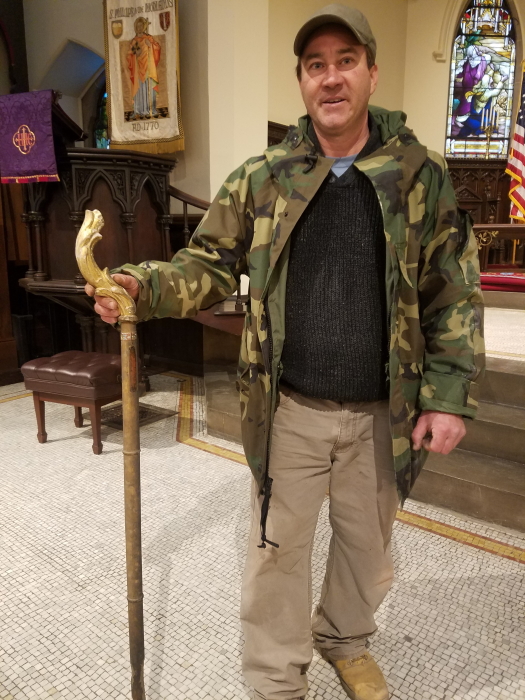 LOST AND FOUND — On Monday (Dec. 16), contractor Sammy Pavic was picking up construction debris from the renovation of St. Philip’s Church in Garrison when he spotted a carved wooden stick under the porch outside the sacristy. A plaque on its handle reads: “Used at the Consecration of St. Philip’s Church in the Highlands A.D. 1862.” Designed by architect Richard Upjohn, the stone structure was consecrated on May 1, 1862 by the bishop of New York, Horatio Potter. “We had no idea this crozier existed,” reports Jan Anderson, co-chair of the restoration committee. “Its appearance now, when we have just celebrated a major renewal of this beautiful church, feels like a true blessing.” (Photo provided)

Albert Ireland of the Sunk Mines asked The Recorder to correct its earlier report that he was dead.

Floyd Barrett, a fugitive since he sawed his way out of the Carmel jail, was discovered in the Kingston jail after being accused of stealing chickens there.

Postmaster Timm was given a letter that read: “Dear Santa Claus, please bring me a big doll and a red slay and a doll carriage, some candy, nuts and an orange. I have so many sisters; that is all I want. I have the same baby I had before. I am 9 years old. I have no more to tell you. I will close my letter now. Your friend, N.”

The Rev. J. Inman of the Methodist Church presented two sermons on consecutive Sunday evenings: “The young man for whom the sensible girls are looking” and “The wife who is worth more to a man than a fortune.”

Putnam County Sheriff Henry Stevens reached an agreement to board prisoners at the Elmsford penitentiary in Westchester for 57 cents a day. The going rate was 60 cents a day, but Elmsford charged less because it put the prisoners to work.

Maj. Joseph Fogarty, who was with two Cold Spring men who died during the Argonne offensive in France, visited the village. He told Margaret Casey, the mother of Sgt. George Casey, that his company had suffered a direct hit from a large German shell during a 6 a.m. advance on Sept. 27. Casey died at 3 p.m. the following day and Lt. Charles deRham was also mortally wounded.

Perry & Reilley removed the gas system in their store and connected with the electric light system.

Robert McCaffrey was severely injured when a horse kicked him in the mouth and loosened all of his upper teeth, which had to be extracted at Peekskill hospital.

A shortage of coal led the National Railroad Administration to cut 131 trains for five days on the East Coast, including three daily northbound and two daily southbound trains operated by the New York Central.

Jesse Starr and William Conklin pleaded guilty to assaulting John Caray in 1917 and were each sentenced to three to four years in prison.

The Village Board gave permission to J.G. Southard, president of the Cold Spring Light, Heat and Power Co., to place a Christmas tree on Main Street.

Parishioners at St. Mary’s Catholic Church surprised the Rev. Joseph Bergen on the 25th anniversary of his ordination with 25 roses and a silver purse containing $50 in gold coins. When he visited the Loretto school, the 34 children shouted in unison, “Happy Jubilee, Father!”

Harold Post, the proprietor of W.L. Post & Son’s Garage, died at 56 of a heart attack. He opened the garage after running a blacksmith shop for many years.

An assembly was held at Haldane Central School in which Sgt. James Hoffman, a 1942 graduate, gave an account of his 50 missions as an aerial gunner. The assembly also featured a film about how to win basketball games.

Technical Sgt. Willard Lusk Jr. of Beacon, the son of Mr. and Mrs. Willard Lusk of Cold Spring, was awarded the Bronze Star. Lusk was the crew chief of a B-26 bomber that completed 74 missions without any mechanical failures.

Lt. Gerald Dale of the Army Air Force, the son of Capt. and Mrs. Francis Dale of Chestnut Street, was killed in action in Belgium.

The estate of the late furniture manufacturer Louis Ferguson, who lived in Garrison, was appraised at $2.7 million [about $25 million today].

A German helmet sent from France by Sgt. James Peattie was on display at his father’s store in Beacon. It was inscribed by Peattie and the men serving with him, including Maj. Donald Berrigan of Cold Spring. 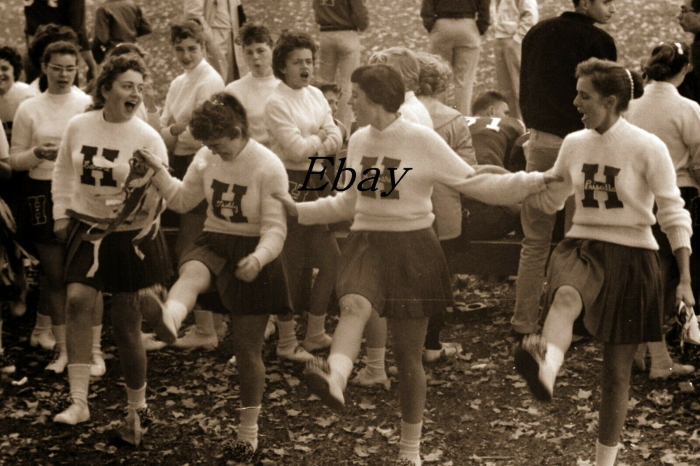 EBAY FIND — This 1958 photo of Haldane cheerleaders at a football game was taken from a negative that sold on eBay this month for $10 (and was watermarked by the seller).

The friends of author Cora Hardy Jarrett, who lived in the area for a number of years, donated a collection of her books to the Butterfield Library. Jarrett wrote six novels and two books of short stories, some under the pseudonym Faraday Keene.

Veterans held a “Peace with Honor” march through Cold Spring and Nelsonville.

The Marathon Battery Co., which makes Sonotone nickel-cadmium batteries, consolidated its operations into a location on Kemble Avenue in Cold Spring.

The Garrison School held a student debate competition on the topic: “Resolved: Should there be censorship in the music industry?”

Index Design of Garrison donated to the Garrison Volunteer Fire Co. two emergency rescue tools it had received from the Hurst Tool Co. for evaluation.

A 22-year-old Beacon man was arrested on charges of assault in the first degree after a stabbing at 22 Market St.

Tracy Johnston, the daughter of Jim and Susan Johnston of Garrison, was selected as a Rhodes scholar. The Wellesley College student met Bill Clinton during her first semester and became the youngest staffer, at age 19, on his presidential campaign before returning to her studies.