It all started with a David Lebovitz recipe for roasted squash and preserved lemon. Israeli couscous was the specified basis for the dish, in this case a cinnamon-scented layer that supported the vegetables and amplified the fragrance of the preserved lemons — in other words, a nice dish for a vegetarian meal or holiday side.

The first version seemed a bit insubstantial. The thought occurred: why not substitute fregola? An uncommon Sardinian pasta, it’s made by rolling moistened durum semolina into pea-sized orbs that are dried and toasted in the oven before being boiled and drained like pasta.

It is a practical shape traditionally used as a medium for seafood or meat sauces. It lends a particularly toothsome texture and toasty bite, it’s useful in soups or salads, and it’s small enough to substitute for risotto. It can be difficult to locate but in Cold Spring you can sometimes find traditional Sardinian Casa Del Grano Fregola Sarda at the Riverview Home Chef behind the Riverview Restaurant. 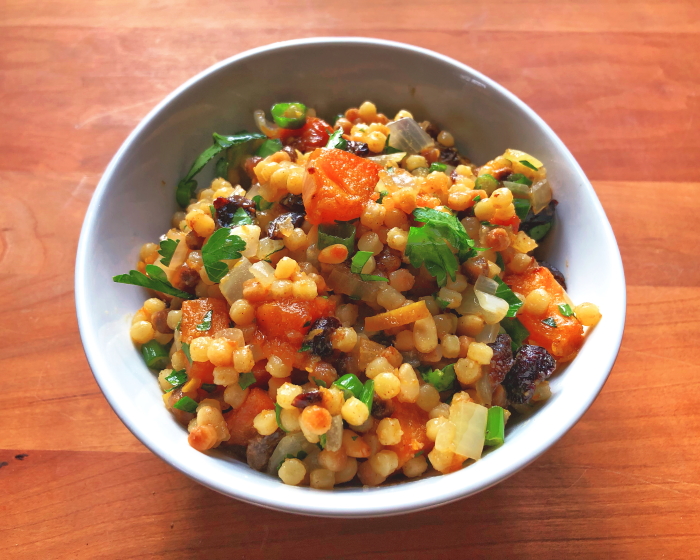 At last check, alas, Riverview was out, so in offering this recipe it occurred to me to return to the original couscous and make a slight modification.

Israeli couscous, which is also known as pearl or giant couscous, is a relative culinary newcomer. Known in Hebrew as ptitim (“flake”), it was created in the 1950s in Israel as a replacement for rice during times of austerity. It was originally called Ben-Gurion rice in honor of David Ben-Gurion, the first prime minister of Israel, and extruded in rice-like shape and size, much like Italian orzo.

It later came to be made in the more familiar small, dense spheres of durum semolina. It is also toasted, like fregola, to give it a similar nutty flavor.

I find that fregola is a bit denser and usually more toasted. The easy fix is a quick toss in a hot skillet to further color the couscous. And thanks to Bob’s Red Barn Mills, even more niche varieties of pearl couscous are available in a traditional pearl or whole-wheat version. For this recipe, stay away from the “golden” couscous, which is a smaller North African variety.

That brings us back to the recipe at hand and a realization that it doesn’t make that much difference which you use, and in further retrospect the thought that the spices here will stand up well to a variety of other substitutions: spelt, kamut or even wild rice would more likely create respectable takes on the formula.

*To further accentuate the similarity to the fregola, heat a skillet over medium-high; add the couscous to the dry pan and swirl it around, keeping and eye on it until it begins to color slightly. Don’t let it burn. Remove toasted couscous from the pan and cool before cooking as per recipe.