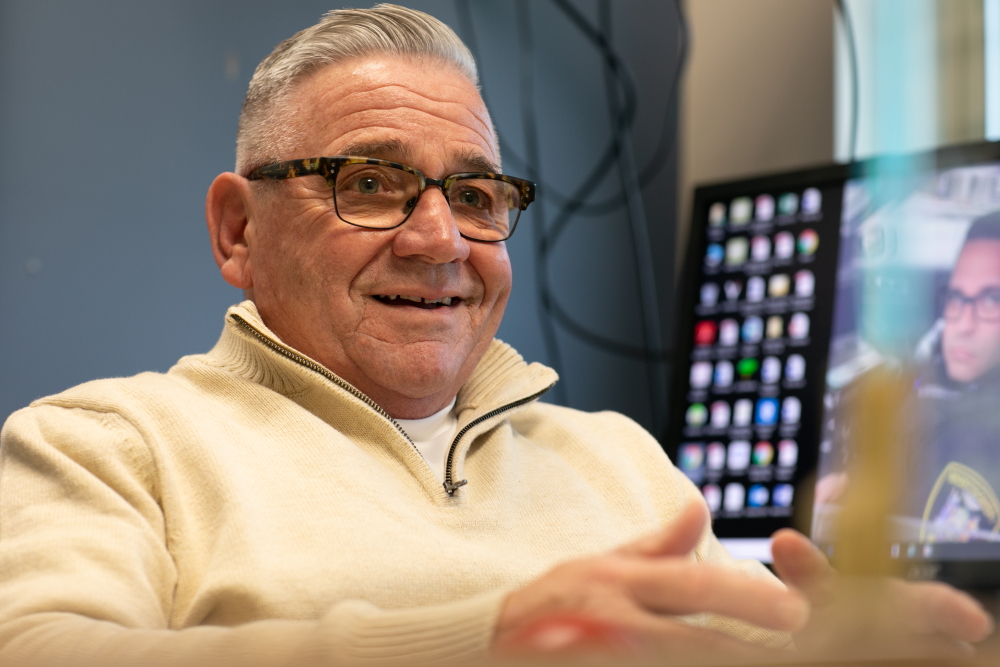 As he leaves office, Randy Casale looks back, and ahead

Beacon Mayor Randy Casale, 68, who will leave office on Jan. 1 after being defeated in the November election by City Council member Lee Kyriacou, spoke with The Current on Dec. 18 at City Hall about his eight years on the job, and what comes next.

Did you always want to become Beacon’s mayor?

My uncle was the commissioner of public works for 16 years here, and when I was a young boy, he was running for office. I watched him run. Bob Cahill was also a mentor of mine. My father left home when I was 4 years old and Bob, who had been a prisoner of war during World War II and was living with his sister, was our neighbor on Main Street. He was a great basketball and baseball coach. I played for him and then he became mayor [in 1970].

There were two things I wanted to do — to coach basketball and become mayor — and I did both. [Casale is a coach at Beacon High School.] I watched him go through the process and I said, “I’d like to be the mayor someday.” After I graduated from high school, I’d hang out in the local taverns and say that and they’d all laugh. 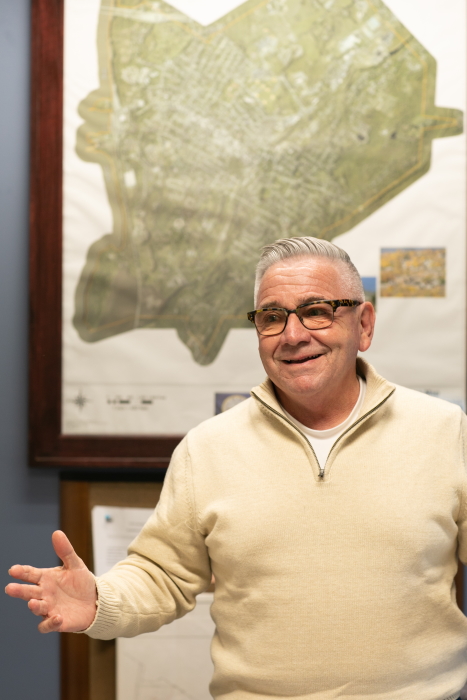 What was Beacon like when you were elected in 2011?
It had started turning around when I came on because [former longtime Mayor] Clara Lou [Gould] decided to put a full code department together to start enforcing building codes. People who were using buildings for single-room occupancies had to put money into them. As that started happening, they started selling buildings to people like Ron and Ronnie Beth Sauers and Gary Wood — people who wanted to rehab them. Then Dia came and it started snowballing.

In 2008 I was on the City Council and the economy went bad. Things slowed down but the city had done a comprehensive plan in 2007, the first one since the 1970s, and that was going to be the model by setting up the Fishkill Creek zone, Main Street and the waterfront district.

The Main Street and waterfront zones never got finished, so when I became mayor, I disbanded both committees and put one together for both districts, which became the Central Main Street and Linkage districts. I left out the MTA property because nobody wanted transit-oriented development [TOD] at the time. I thought if we could get those done, we could talk about a TOD plan at the train station, because by then we’d be built back up to the river, which is how it was when I was a kid. Once we got all that done, people became interested in building in Beacon.

Could you have ever predicted Beacon’s popularity?
No. When the [Newburgh-Beacon] bridge went in, the ferry went away, the malls opened and industry went away, that’s when the cities — Beacon, Newburgh, Poughkeepsie — went down. Did I ever envision Beacon coming back the way it has? No way in hell. That’s why when I hear people complain about a little congestion — and I’m talking about old-time Beacon people — they’re out of their minds, because this is the only savings for these cities, to have tourism through the arts. You hope to have businesses come in and create some jobs, but it’s not going to be like when we had all the industries.

I embrace it. People say “I don’t know anybody here anymore,” but that’s not a bad thing. I saw Beacon [thriving] as a kid and I saw many years when there wasn’t much happening on Main Street. To see it back where it is, and to know that every community around us would love to be us, it makes me feel good to say I’m from Beacon. 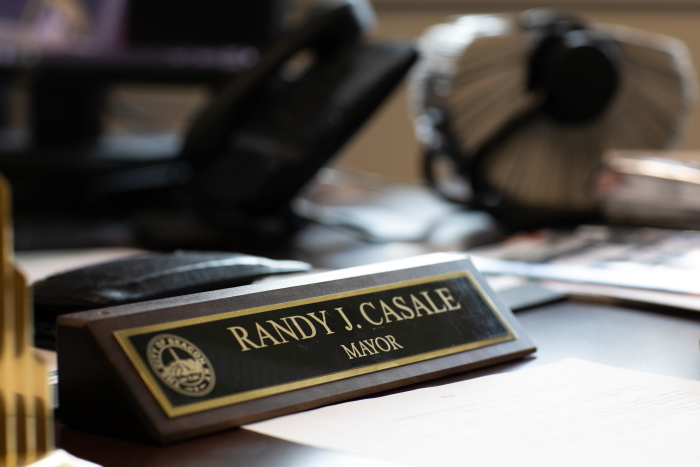 What’s the state of the city as you leave office?
The city is financially in real good shape, but the next group that’s coming in will have to face the same things I did. We have an aging infrastructure, and they’re going to have to keep throwing money at it to upgrade, whether we develop or not.

We have an asset-management plan that will give them something to go by but you never fully catch up. Everybody in New York state is in the same situation. When you’re talking about spending millions and millions of dollars to replace water lines and then you have to raise water rates to pay for it, people won’t be happy about that, because they don’t see the benefit. But eventually it will all have to be replaced.

That’s the biggest thing facing the city. The second biggest is emergency services, but that’s [true] throughout the country. Volunteerism is dying and fire and ambulance services need to be county-run, strategically located and paid for over a broader tax base. It’s coming to a crucial point where something’s going to have to happen.

What are you proudest of?
The first time I ran for mayor, there were a lot of people here who didn’t want me to win. They made signs and put them at every entrance to the city saying “We love Randy, but not for mayor.” I won them over because I had an open-door policy. Anyone could come in here and ask me anything, and I always gave the best answer that I could. 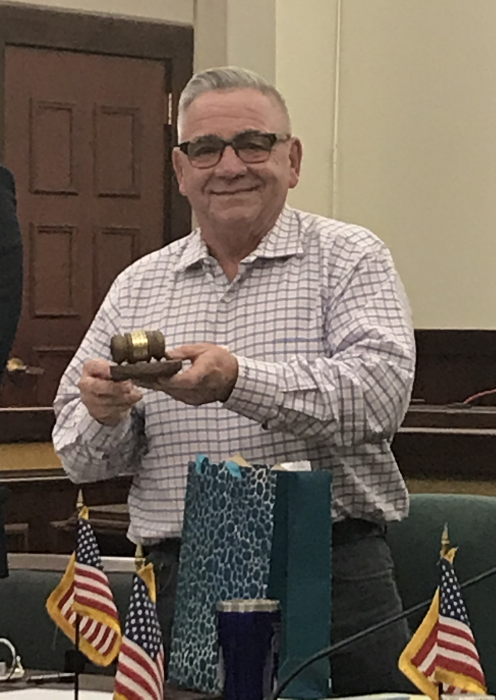 Members of the Beacon City Council presented Casale with a gavel at his last meeting. (Photo by J. Simms)

What will you miss?
Interacting with people. The fun part was dealing with people and trying to come up with solutions. I enjoyed every minute of it.

Any funny memories?
I married a lot of people. I didn’t realize that people get a license today and they want to get married tomorrow. But if I was here, I’d say yes. I did more than 100 weddings, I think.

Lessons learned?
To be in this business you need to be connected to a political party. [Casale is a member of the Independence Party and also appeared on the Republican line.] When a party gets behind you, you have a better chance of moving forward. But that wasn’t my style; I wanted to make my decisions based on the information, not what my party thought I should be doing.

I hear people say, “We voted you in — you need to listen to us.” But the people saying that might just be a small group that doesn’t like what you’re doing. You can’t play to that game. You have to believe you’re doing the right thing to move the city forward, and sometimes those are not the most popular decisions. I knew from coaching you can never tell everyone what they want to hear. But I probably should have tried to be more of a politician.

What’s next for you?
I’ve put a couple of applications in for part-time jobs, but I don’t know. I know I’ve got to do something, though. I can’t sit at home. Hopefully I’ll continue to coach basketball. That’s my other love.

One thought on “Beacon’s Mayor Reflects”