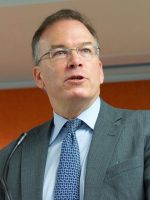 Nicholas Stuyvesant Fish, 61, a resident of Portland, Oregon, and a member of a prominent Garrison family, died Jan. 2, 2020, of a rare form of abdominal cancer.

He was born in New York City on Sept. 30, 1958, the son of Hamilton Fish IV, of Washington, D.C., and Julia Mackenzie, of Montreal. He attended the Dutchess Day School as a child in Millbrook and later St. Alban’s School in Washington, D.C., where he graduated in 1976.

Fish attended Harvard College, earning his bachelor’s degree in 1981, and in 1986 he completed a JD at Northeastern University. He earned partner in the labor-oriented firm Levy, Pollack, Ratner and Behroozi in New York City and later worked at the general practice firm Meyer & Wyse in Portland, Oregon. In 2008 he was elected city commissioner in Portland.

Nicholas Fish was a great lover of cities. At the core of his understanding of public service was the advancement of the quality of urban life for all — especially  in housing, parks, and the arts. While practicing law in Manhattan, Fish was appointed by Borough President Ruth Messinger to Community Board No. 5, which he eventually chaired. A signal accomplishment of the board during his tenure was its support of the Time Square Hotel, a housing project for low-income and HIV-positive residents who faced discrimination.

For his work on the hotel in partnership with The Common Ground, a non-profit agency, Nick Fish was awarded the Rudy Bruner Award for Urban Excellence in 1994. He was also active on behalf of the St. Mark’s Church Landmark Preservation Fund, which supported the historic church that had been the parish of his ancestors dating back to the 17th century.

Fish drew inspiration from his family’s long tradition of public service in New York State. He was a descendant and namesake of Col. Nicholas Fish, who served at Yorktown under George Washington and married Elizabeth Stuyvesant, a descendant of Petrus Stuyvesant of old New Amsterdam (the builder of St. Mark’s). His father, Hamilton Fish IV, served as a Republican in Congress from the Mid-Hudson Valley from 1968 to 1994. The young Congressman came to prominence when he broke with his party during the vote in the House Judiciary Committee on articles of impeachment against President Nixon in 1974.

This event, and his father’s thoughtful, even-handed approach to it, made a lasting impression on Fish as a teen living in Washington, his family said. Nick Fish became active in politics after college, when he volunteered for first-time candidate for Congress Barney Frank. Serving first as Frank’s campaign driver in Massachusetts, Nick later became his legislative aide in Washington.  Another important influence was a legal clerkship under A. Leon Higginbotham Jr., the distinguished civil rights judge of the Third Circuit in Philadelphia. This training and social justice orientation found expression during his legal practice in New York, where he represented the 1199 Health and Hospital Workers Union.

Fish married Patricia Schechter in Peekskill in 1989. Shortly after their first child, Maria, was born in Manhattan, her academic career led the family to Portland in 1995. Their second child, Chapin, was born there in 2004.

Following the 9/11 attacks, Mr. Fish took a leading role in an organization called Oregon Loves New York. This group made solidarity visits and offered support and service to the victims of the tragedy. Oregon Loves New York was enthusiastically supported by then-Portland mayor Vera Katz, herself a former Manhattanite, and she awarded the group the Spirit of Portland award in 2001. Nick Fish also served on the Oregon Cultural Trust, and the Housing Authority of Portland, and served for many years as an enthusiastic judge of the annual We the People competition, a constitutional forum and competition for high school students.

Fish made his first run for Portland City Council in 2002 under the slogan One Neighborhood Called Portland. He ran again in 2004, winning his primary contest but falling short in the general to Sam Adams, a future mayor. Fish turned to community media and hosted a public affairs show called ”Outlook Portland” on channel KRWC-30 for several years. Among his favorite guests was the champion University of Portland Pilots women’s soccer team, which featured Megan Rapinoe. Fish grew into a fan of soccer and Portland’s reputation as Soccer City, USA.

He was also a jazz lover, volunteering as a guest DJ on radio KMHD and supporting the Portland Jazz Festival, launched in 2003.

When a resignation on the City Council prompted a special election in 2008, Fish earned a majority of votes in the primary, thus winning the seat outright in the nonpartisan race. He initially oversaw the Portland Fire Bureau and when re-elected in 2010, he was appointed to lead the Housing and Parks Bureaus. Among his most enduring accomplishments were the consolidation of the city’s housing resources under a new, single bureau, and the completion in 2011 of Bud Clark Commons, a 130-unit residence for people experiencing homelessness. Gray’s Landing, opened in 2013, focused on needy veterans, and Riverplace Parcel, with more than 200 affordable units, is slated to open in 2020.

Fish also established important partnerships in the Portland Parks Bureau, like Harper’s Playground, which models ability-inclusive play equipment and the Summer Free for All program, which features arts-rich family-friendly activities.

Nick Fish earned numerous awards for his passionate service to the public good, notably the Fighting Spirit Award from Basic Rights Oregon in 2011, the 2016 Friends of MET from the Muslim Educational Trust, and, most recently, the Public Official of the Year Award from the Daily Journal of Commerce.

Besides his wife and two children, Fish is survived by his siblings, Hamilton, Alexa and Peter. A memorial service is planned for a later date.