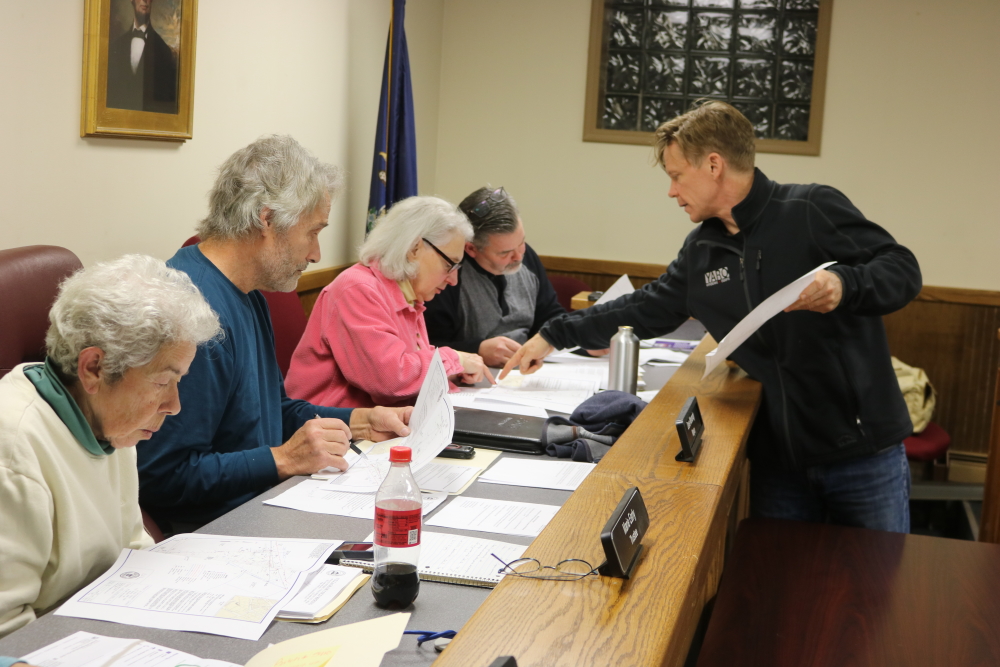 Architect James Hartford (right) presented the board with three requests for purchase of village-owned property. (Photo by M. Turton)

Climate Fair also in the works

Cold Spring could have its first charging stations for electric vehicles by the fall.

At its Jan. 7 meeting, the Village Board voted to support a grant application by Climate Smart Philipstown to fund the $10,000 project. Roberto Muller, the CSP coordinator, said, if the grant is approved, the state Department of Environmental Conservation will pay $8,000 while Cold Spring and Philipstown would each contribute $1,000.

Muller said the charging station would be located on lower Main Street, utilizing two parking spaces north of the pedestrian tunnel that passes under the Metro-North tracks.

He said the station would accommodate two vehicles, with a full charge taking from three to four hours. Drivers would be able to monitor and pay for the recharge via their smartphones, and the Cold Spring police would monitor usage and, after a short grace period, issue tickets if a vehicle remains at the station after a charge is complete.

Stations capable of charging a vehicle in 30 to 60 minutes cost from $45,000 to $60,000. For the time being, Muller said, those stations are limited to highway rest stops.

The grant application deadline is the end of May. If the grant is approved, a local electrical contractor would be selected to complete the installation.

The board also gave preliminary approval for Climate Smart Philipstown to hold a Climate Fair near the riverfront bandstand on Saturday, May 2. Muller said the event will emphasize strategies for reducing greenhouse gas emissions in Philipstown based on data collected for a CSP Task Force inventory. Environmental groups interested in taking part can email Muller at [email protected]

■ Mayor Dave Merandy will sign a new fire protection services agreement with Philipstown in which the town will pay $62,970 for services provided by the Cold Spring Fire Co. during 2020.

■ John Sherer’s request to hold another Hops on the Hudson beer festival at Dockside Park on May 30 and 31 received no support from the board. Sherer, who was not in attendance, earlier received approval for two festivals to be held at Mayor’s Park this summer. Merandy expressed concern over the lack of parking at Dockside and Trustee Fran Murphy pointed out that the village’s agreement with the state, which owns the park, stipulates that a portion must always remain open to the public. Sherer’s proposal calls for a ticketed event that would close nearly all of the park.

■ Brewster lawyer Andres Gil will serve as Cold Spring’s prosecuting attorney beginning Feb. 1. The village is required to have a prosecutor for minor traffic offenses because the service will no longer be provided by the Putnam County district attorney under the state’s newly enacted bail reform laws. Gil will work one day a month at a rate of $150 per hour. Burke said some of that cost may be recouped through fines levied by the court.

■ The board turned down one request and postponed two others for the purchase of small pieces of village-owned property; each was presented by architect James Hartford. Trustees opted not to sell part of the sidewalk at 114 Main St., where, Hartford said, the owner wants to establish a cafe. Tightrope Interactive has offices there but will relocate to Beacon in May. Merandy said the village has sold a number of stoops, but does not want to sell portions of sidewalks. Decisions on sales of property at 29 Rock St. and 207 Main St. were tabled pending site visits.