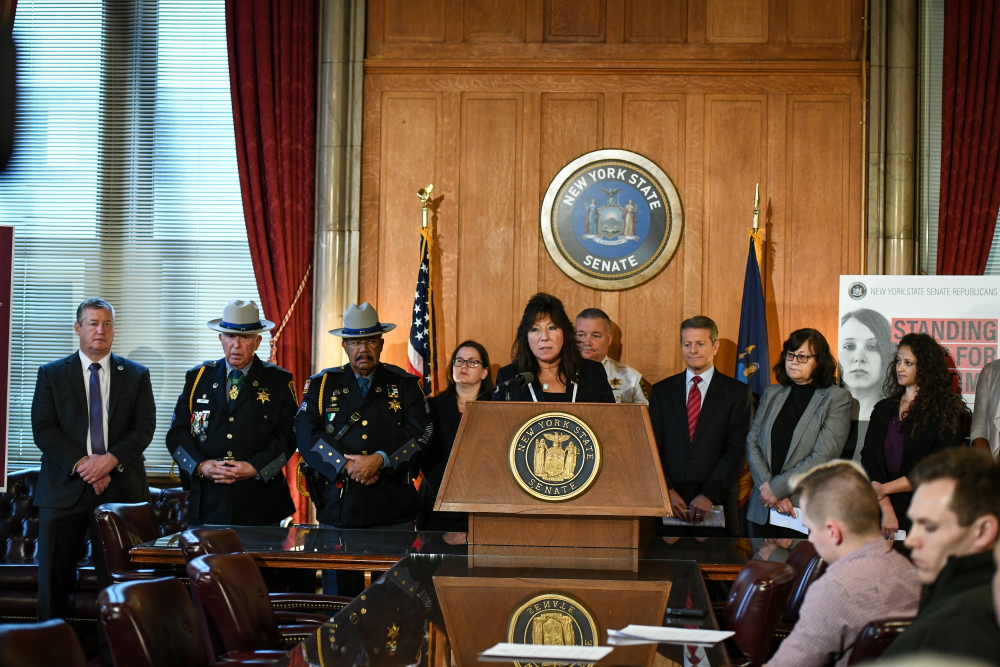 State Sen. Sue Serino on Nov. 7 announced the introduction of two bills that would revise the bail-reform law. At left are Deputies Carmine Romeo and Gene Aiken of the Dutchess County Sheriff's Office. (NY Senate photo)

One charged in fatal Philipstown hit-and-run

The Putnam County sheriff released three defendants awaiting trial in the county jail under the provisions of a new state bail law that went into effect on Jan. 1.

Sheriff Robert Langley Jr. said in a statement that the three men included an undocumented immigrant who in October allegedly struck and killed a 38-year-old Philipstown resident on Route 9 near Horton Road and fled the scene.

The defendant, Javier Lorenzano-Fercano, 40, was taken into custody by agents from the U.S. Immigration and Customs Enforcement upon his release from the jail, according to the Sheriff’s Department. After being arrested in Dutchess County the day after the October crash and charged with leaving the scene of a fatal accident, a felony, he was being held in Carmel on $25,000 cash bail or $50,000 bond.

Lorenzano-Fercano appeared in Philipstown Town Court on Wednesday (Jan. 8). His attorney, Joseph Tock of Mahopac, did not return a phone message.

The victim, Heriberto Mercado, who left behind a wife and two children, was found in the road after a witness heard a loud noise at about 11 p.m. on Friday, Oct. 25. The Sheriff’s Department said Mercado was walking home from the gas station at the intersection of Route 9 and Fishkill Road when he was struck.

(At the Dutchess County Jail, officials released at least 10 defendants following  implementation of the bail-reform law.)

The bail-reform law, enacted as part of the 2019-20 state budget, eliminates cash bail for defendants charged with most misdemeanors and non-violent felonies, a step seen by its supporters as keeping low-income defendants from being jailed for long periods before trial. (A non-violent felony can include stalking, assaults that don’t cause serious injuries, drug offenses and burglary.) By one estimate, as of Dec. 30, about 65 percent of the state’s jail population were defendants awaiting trial.

“To not give judges the ability to consider the dangerousness of a defendant before releasing them directly into a community defies logic and puts public safety in jeopardy.” ~ State Sen. Sue Serino

The law also requires police officers to issue court appearance tickets rather than arrest most people charged with misdemeanors or the lowest class of felony.

The exceptions are sex-related misdemeanors and violations of orders of protection in domestic violence cases. For non-violent felonies, a judge can set bail for sex offenses, conspiracy to commit murder, witness intimidation or tampering, terrorism-related offenses or violating an order of protection.

A few states, including New York, do not allow judges to take “public safety” into account when deciding on bail. (A judge can consider flight risk.) In November, Serino introduced a bill that would allow judges to consider public safety — or what Serino called a suspect’s “dangerousness” — when determining whether he or she should be detained.

She also introduced a bill that would allow judges to set bail for “aggravated family offenses” such as assault, menacing, stalking, manslaughter, coercion, burglary and harassment where the defendant and the alleged victim are members of the same family or household.

“To not give judges the ability to consider the dangerousness of a defendant before releasing them directly into a community defies logic and puts public safety in jeopardy,” Serino said in a statement. “Making this important change is not about partisan politics, it’s about public safety.”

She added: “Proponents of the new bail law have argued that New Jersey recently passed ‘essentially’ the same changes and has seen a reduction in crime as a result. However, New Jersey ultimately did include measures to allow judges to conduct risk assessments before release based on the defendants’ criminal history and the severity of the charges — a measure that is missing from New York’s new bail laws.”

The Putnam County Legislature on Dec. 18 unanimously approved a resolution calling on the state Legislature to repeal or amend the measure. “Bail reform will make it impossible for a judge to set bail on a whole host of cases since cash bail will be eliminated for Class E felonies that include assault, aggravated harassment or theft, in addition to most misdemeanors,” it read. Before voting, legislators amended the resolution to reference Lorenzano-Fercano’s case.