Haldane also won at Valhalla, 41-37, on Jan. 4. In that game, Bela Monteleone had 14 points; Liv Monteleone recorded eight points and 12 rebounds; Molly Siegel had eight rebounds and four points; and Twoguns had eight points and four assists. Haldane visits Ardsley today (Jan. 10) and Walter Panas on Monday, Jan. 13, before playing in the Peekskill Tournament next Friday.

Beacon defeated Peekskill, 44-21, on Monday (Jan. 6) before falling to Poughkeepsie on Tuesday, 54-51. The Bulldogs (6-6) travel to Hendrick Hudson next Friday.

Chris Crawford, a freshman at Beacon High School, went 7-0 on Dec. 27 and 28 to win the 106-pound championship at the Mid-Hudson Wrestling Tournament hosted by Arlington High School. Crawford defeated Newburgh’s Jackson Meril in a 12-4 major decision in the title match, improving his season mark to 16-1. 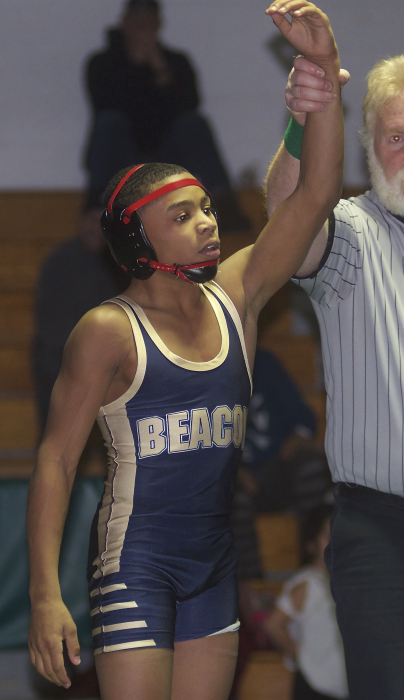 “That was a good bounce-back win for us to start the year,” Coach Scott Timpano said of the Roosevelt game. “Quazir had one of his better games of the season, and Tre Smith [with six points and eight rebounds] had a nice game.”

Beacon is set to visit Hendrick Hudson on Monday, Jan. 13, before a trip to Haldane on Jan. 17 for the Battle of the Tunnel.