Cold Spring has had its share of discolored drinking water but nothing recently like the murkiness of the weekend of Jan. 10. 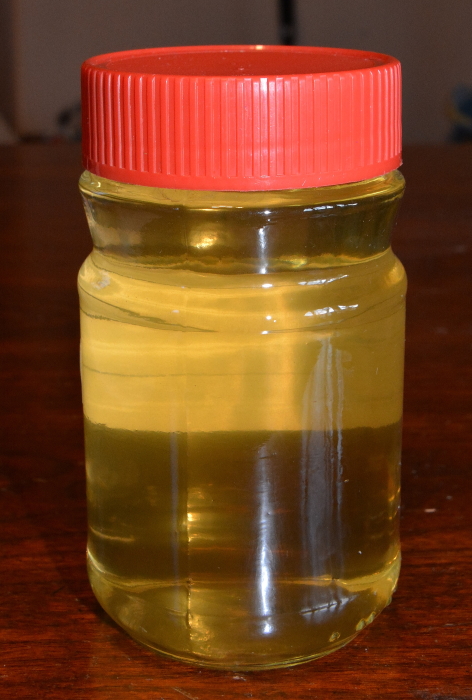 Water collected from the tap of a Cold Spring home on Jan. 10 (Photo by L.S. Armstrong)

At the Tuesday (Jan. 14) meeting of the Cold Spring Village Board, Mayor Dave Merandy said the village had received as many as 40 complaints about water color.

Superintendent of Water and Waste Water Matt Kroog said sampling confirmed that the water does not pose a health risk.

The discoloration is caused by the village’s aging delivery system, Merandy said, and there is no quick fix. Cold Spring’s water lines were installed in 1895 and 1896, he noted, and they are cast iron, meaning they “deteriorate and flake.” A system flush by the village of the lines is the typical remedy, but “we don’t have a lot of capacity for flow,” the mayor said.

The problem has been exacerbated by drought conditions. In August, the village reservoirs off Lake Surprise Road were at less than 80 percent capacity. Levels dropped another 11 percent in September after less than a quarter-inch of rain fell that month. Levels have improved since, but the reservoirs remain at less than capacity.

Merandy said since Kroog took over in late July, conditions have not permitted a flush. The options are few. The cost of replacing the water lines, which were installed on dirt roads but now are buried beneath asphalt and concrete, would be prohibitive, Merandy said.

Kroog said he’d like to do three system flushes each year, but Cold Spring has typically done only two. Adding a third, he said, would depend on an adequate water supply in the reservoirs. He said he is considering a chemical treatment to control corrosion, which would require approval from the Putnam County Health Department.

Merandy urged residents to contact Village Hall when they have concerns about the water, saying the information helps the water department deal with the problem. “Facebook is not the place to go,” he said. “It’s not the way to comment.”

John Scherer, the organizer of the Hops on the Hudson beer festival, appeared before the board to address a previous request to hold an arts-and-crafts fair at Dockside Park on May 30-31. Trustees voiced skepticism at last week’s meeting, but Scherer was not present.

On Tuesday, Scherer provided a map of the event’s proposed layout. Along with live music and food trucks, as many as 100 artisan and craft vendors would set up tents. Unlike the two beer festivals he will host at Mayor’s Park this summer, the May event would include only a small number of alcohol vendors. The event would be ticketed with what he described as “a small entrance fee.”

The mayor and trustees peppered Scherer with questions about the location of the music, food trucks and entrance. But it was the scope of the event that became the sticking point, especially the number of vendors and tents, the effect on traffic, and adequate parking.

Scherer identified a number of potential parking areas that could be used, including churches, the village Highway Department yard, Haldane school and the Metro-North lot, but conceded none has been reserved.

“It looks like too much for us to take on,” Merandy said. He suggested the event be held in Mayor’s Park, which he said is more accessible and has more parking.

Scherer described Dockside as “a beautiful location for crafts,” and pointed out that the July 4 fireworks draw a huge crowd to the park.

Larry Burke, the officer-in-charge for the Cold Spring Police Department, expressed concern about the size of the event at a location with limited access. He noted that lower Main Street is closed for the fireworks.

Scherer said he would return in two weeks with a revised plan with fewer vendors and alternate parking.

■ Trustee Lynn Miller noted that in 2019, Putnam County received $4 million more than it had expected from retail sales tax. “If they shared 10 percent of that, we would get $44,000,” she said. “It would go a long way toward dealing with tourism challenges.” 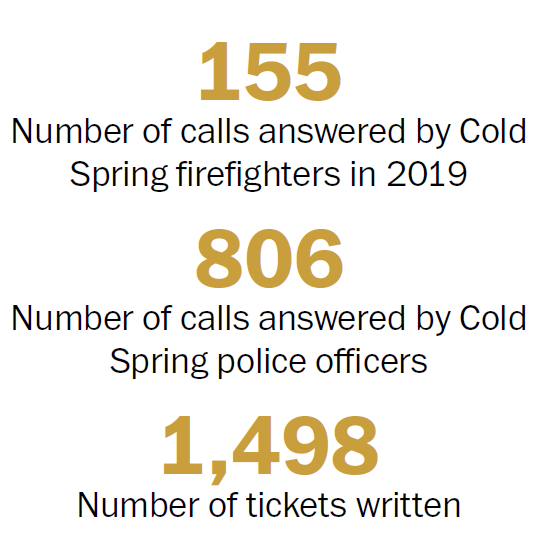 ■ Burke reported that officers in December made three arrests, two for driving without a license and one for violating an order of protection. Officers also responded to 43 calls for service and wrote 26 traffic and 63 parking tickets.

■ Former police officer Bill Bujarski, who retired recently, was hired for up to 64 hours at $25 an hour to organize evidence from ongoing cases while disposing of items from cases that have been closed for some time.

■ The board voted unanimously to decline a request for the purchase of a small tract of village-owned property at 29 Rock St. Trustees took no action on a request to purchase property at 207 Main St. pending receipt of a revised map from architect James Hartford showing the boundaries of the land.

■ Merandy will sign a memorandum of understanding in which the village will pay the Cold Spring Fire Co. $121,718 for fire protection services in 2020. Part of that payment is funded by Philipstown and Nelsonville.

■ During the public comment period, a resident noted that the “walk” sign at Cold Spring’s traffic light only illuminates when pedestrians push the button located on poles at the intersection. She said children often forget to push the button, creating a dangerous situation, especially when vehicles are turning. Merandy said he would contact the state Department of Transportation, which has jurisdiction.