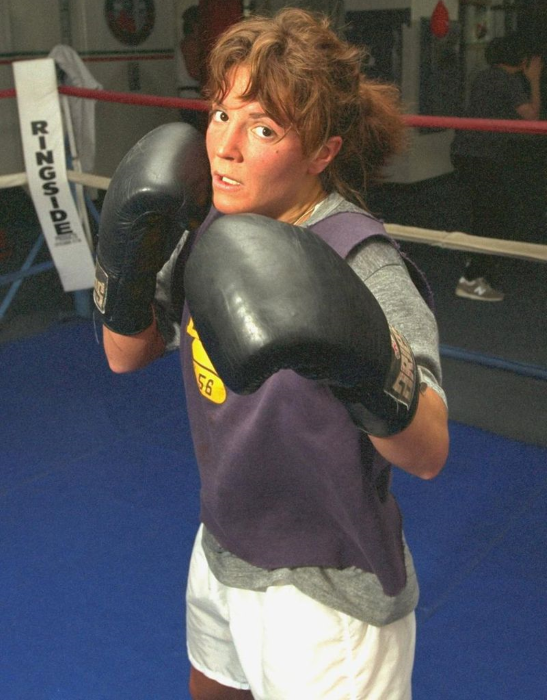 When asked if it’s hard to punch someone in the face, Denise Friedly has a ready answer: “No — it’s hard getting punched in the face.”

Over her career, it’s safe to say Friedly punched opponents more often than they punched her. Her amateur wins included two New York Golden Gloves titles (she is a member of the New York Daily News Boxing Hall of Fame) and two national amateur championships.

Friedly attributes her pursuit of “the sweet science” to family squabbles. Her father gave her and her younger brothers boxing gloves. “If we had a big disagreement, we’d move the furniture and go at it,” she said. “I held my own.”

In 1995, the Golden Gloves added a women’s division. Friedly said she naively assumed she’d be facing “a bunch of barroom brawlers.”

She was wrong. The 60 women who registered included doctors, lawyers, nurses and teachers — “everyone under the sun,” Friedly recalls. (Friedly at the time was a 28-year-old teacher from Westchester County; she still teaches at a Westchester high school.)

Friedly says boxing provided her with a challenge after having already excelled in basketball, soccer and volleyball. “I was looking for a way to shine,” she says. 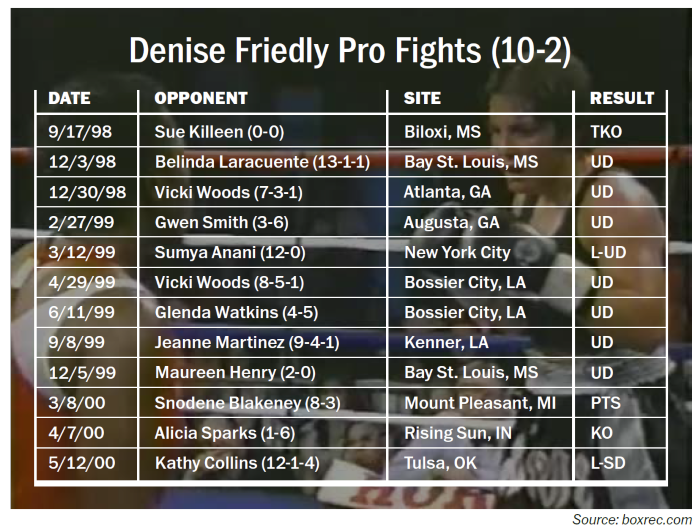 In her first Golden Gloves bout, she defeated Taneasha Harris at Mount St. Michael Academy in the Bronx. “We went toe-to-toe,” recalls Friedly. She advanced to the final at Madison Square Garden, where, at 137 pounds, she became the junior welterweight champion.

Friedly remembers how focused she and the other female boxers were that first year. “We wanted to learn the art of boxing,” she says. “It was not a novelty.”

She recalls being nervous as she watched the first women’s bout at Madison Square Garden. “I was fearful they’d stop the fight for all the wrong reasons, like a bloody nose,” she says. Both boxers got bloody noses, but the fight went on; women were being taken seriously. “The crowd was completely supportive — of boxing,” Friedly says. 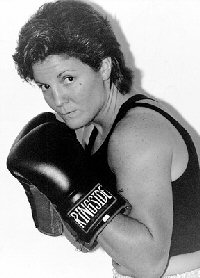 As she got more deeply involved with the sport, managing her time became a challenge. She was teaching full-time, coaching varsity soccer and training.

In 1996 Friedly wanted to fight at 132 pounds in the Golden Gloves but weighed 137. On the day of the weigh-in, she donned long pants and two winter coats and ran up and down stairs until she lost 5 pounds. “I made my weight,” she says. “Luckily I didn’t also have to fight that night.” She reached the final but lost.

Friedly regained her championship form the following year, winning the 1997 title at 139 pounds. She was also the U.S. National Amateur Boxing Champion that year and in 1998 before turning pro. Professional female boxers were paid little compared to their male counterparts. Friedly says her biggest payday was $15,000.

Asked if being aggressive is always the best strategy in the ring, Friedly says: “Sometimes, but generally it’s more like a chess match — but a very fast one,” adding that missing when trying to land a punch “is more tiring than anything.”

Friedly says she often cried at the end of a bout, win or lose, from exhaustion. “I ran in seven marathons and I’m still not sure which was tougher,” she says. “When I fought, I left it all in the ring. I loved boxing, and my opponents.”

As a professional, Friedly says the toughest boxer she faced was Sumya Anani, who had defeated Christy Martin, who was managed by Don King and finished her pro career at 49-7-3, with 31 knockouts. “He didn’t want Christy to fight me,” Friedly says. “So, I wanted to fight the girl who had beaten Martin.”

Friedly, undefeated in four professional matches, and Anani, undefeated in 12, were the undercard at the Roseland Ballroom in New York City on March 12, 1999. After 10 rounds, Anani won a unanimous decision.

The lowest moment in the ring for Friedly came in what would be her last fight, on May 12, 2000, in Tulsa, Oklahoma, when she battled Kathy Collins for the women’s vacant International Boxing junior welterweight title. Friedly was confident, having defeated Collins in the 1995 Golden Gloves. 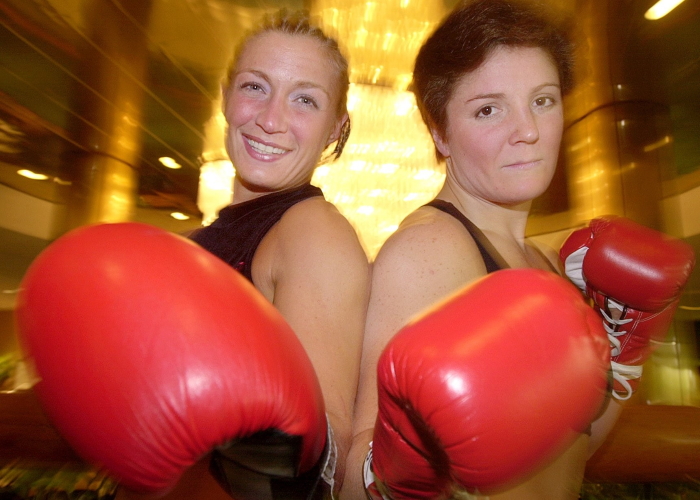 It was a black-tie event. “Everyone was there,” Friedly recalls, including former heavyweight champion Ken Norton and former middleweight champion Jake “Raging Bull” LaMotta. The bout, televised on ESPN, went the full 10 rounds.

Collins won, but the split decision (96-94, 94-96, 96-94) was not without controversy. The three judges had been hired by the fight promoter, but at the last minute the state boxing commission replaced two of them with twin brothers who were locals, Friedly recalls. The brothers gave the fight to Collins; Friedly says they had no experience judging at that level.

“I was devastated,” she says. “I never fought again.”