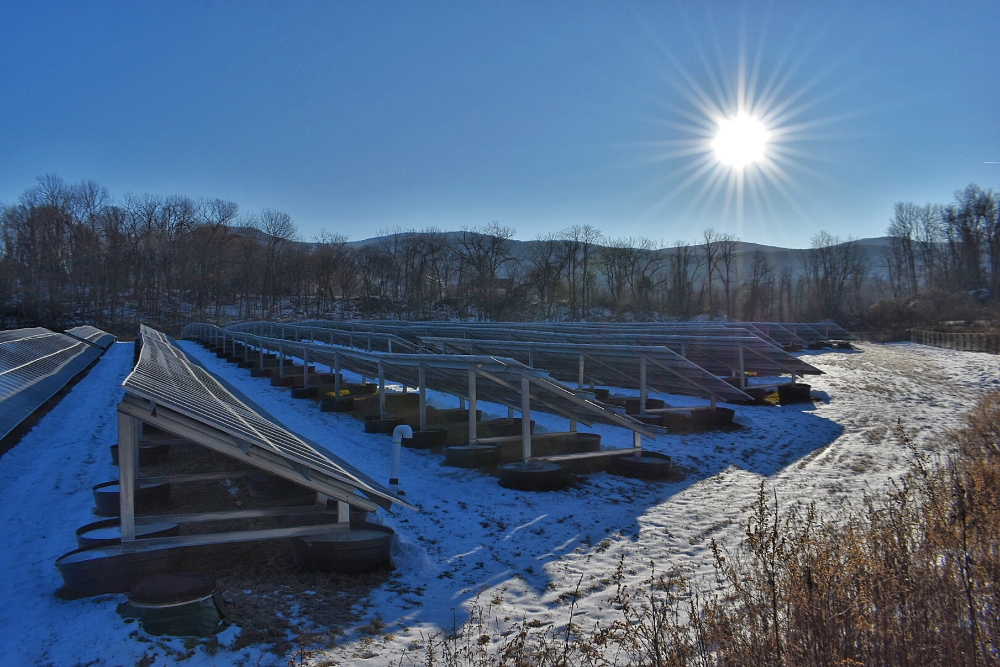 The City of Beacon's solar farm at the former Denning's Point landfill (Photo by B. Cronin)

Municipal pollution down from 2012 levels

After reviewing four previous inventories of local greenhouse gas emissions conducted between 2012 and 2018, as well as estimates for 2019, the City of Beacon calculated that its municipal operations have reduced its emissions of greenhouse gases, which contribute to global warming, by 25 percent since 2012.

“Fighting climate change is critical for a strong economy and a healthy future,” said Mayor Lee Kyriacou. “We are pleased to show a significant decline, but this inventory also shows us the work we have left to do.”

The majority of the cuts are the result of two recent projects. In 2016, the city converted its traffic signals and streetlights to more energy-efficient LEDs. And in 2018, the city installed a network of solar panels atop the former Dennings Point landfill. City Administrator Anthony Ruggiero estimated that, in addition to reducing emissions, the two projects have so far saved the city $300,000.

In 2019, its first full year in operation, the solar farm generated 3.32 million kilowatts of electricity and saved 445 metric tons of carbon dioxide from being generated. According to estimates by the federal Environmental Protection Agency, that’s enough energy to power 319 homes for a year, while the carbon dioxide savings is the equivalent of taking 97 cars off the road for a year.

“The greenhouse-gas inventory is the first step toward creating a climate action plan where we’re going to be stating how much we hope to reduce our greenhouse gasses by and our plan for getting there,” explained Eleanor Peck, who was hired in September as the city’s Climate Smart Coordinator.

The state Climate Smart Communities program is one way that New York is planning, at the local level, to reach an ambitious goal of 100 percent carbon-free electricity by 2040 and a “net-zero” carbon economy by 2050.

That would bring the total public charging stations to eight, with two installed by the city across from City Hall, two by Dutchess County in the parking lot of the Department of Motor Vehicles building on Main Street, and two by Metro-North at the train station.

Other suggestions in the report were to make the city friendlier to bicyclists and improve its water and wastewater facilities. Energy efficiency upgrades in both residential and commercial buildings are also seen as a significant way to lower emissions, as well as adding renewable energy sources and the conversion of building heating to air source or geothermal heat pumps.

The city won’t be going it alone. Peck said that Beacon will be taking part in a carbon-action planning institute along with the Hudson Valley Regional Council and other municipalities.

The City Council also recently voted to join Climate Mayors, a bipartisan national group with 435 members. The group has committed to following through on the Paris Climate Agreement at a local level after the Trump administration withdrew the U.S. from the international accord.