A Putnam County sheriff’s deputy was slashed on Monday (Jan. 20) while responding to a report of a domestic dispute in Putnam Valley.

The deputy suffered a severed artery on his left forearm and underwent two surgeries, according to the Sheriff’s Department and a police report, but was released from the hospital on Wednesday. The injured officer, a seven-year veteran, had been rushed to the emergency room in a police car.

Sheriff Robert Langley Jr. said the department believes it is the first time in its history a Putnam deputy had suffered a life-threatening attack.

“The damage was more extensive than originally thought but the skilled surgeons at New York-Presbyterian Hudson Valley Hospital were able to repair the damage,” said Langley in a statement. “His prognosis for a full recovery is good.” 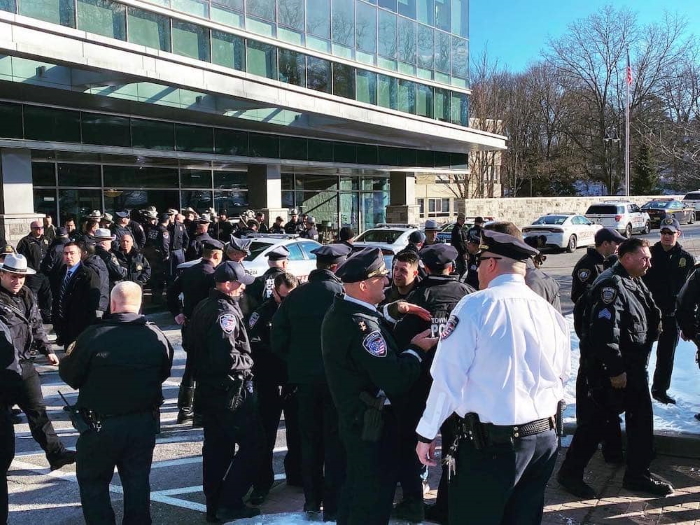 Law-enforcement officers wait outside the Hudson Valley Hospital on Wednesday (Jan. 23) for the release of a deputy who was slashed. (Putnam County Sheriff)

The Sheriff’s Department identified the suspect as Timothy Redmond, 25. He was charged with attempted murder, attempted assault, assault and aggravated assault of a police officer.

The deputy, whom the sheriff did not identify, was released “amongst great fanfare with members of his department, local law enforcement —including a helicopter flyover from the Westchester County Police — K9s, first responders and hospital staff lining the lobby,” Langley said. “He is now resting comfortably at home.” He said the deputy “extends his gratitude to everyone who sent their good thoughts and prayers and for their good wishes.”

The officer is the second Putnam deputy to be seriously injured in as many months. On Dec. 14, a deputy suffered two broken ankles when he was struck by an SUV while directing traffic on Route 6 in Mahopac.

Langley said that in the Jan. 20 incident the officer responded with another deputy at 10 a.m. to a call about a domestic dispute at a home on Peekskill Hollow Road. When they arrived, they were confronted by a male suspect with a knife. The officers attempted to Taser the suspect but he slashed the officer during the struggle and was subsequently taken into custody.

Before officers arrived, the suspect also stabbed his father multiple times in the chest and stomach with a kitchen knife, according to a police report. Despite “substantial injuries,” the father refused medical treatment, the sheriff said.

Tom Corless, a senior investigator with the Sheriff’s Department, said Tuesday night that poor radio service nearly increased the seriousness of the attack.

The injured deputy was trying to use his radio, Corless said, but it wasn’t connecting. “He was lucky; people got there” in time, he said, noting that he was among those who responded to the call. “But how long was that? We don’t really know.”

Corless, a former Nelsonville mayor, suggested that the installation of emergency services equipment on a cell tower planned for Rockledge Road could help prevent such delays. “If it was critical thing of a second, that makes a big difference to us, to all of us,” he said.

Langley said the officers’ radios need to be upgraded. With the current models, “sometimes it’s static, and sometimes it’s nothing at all.”