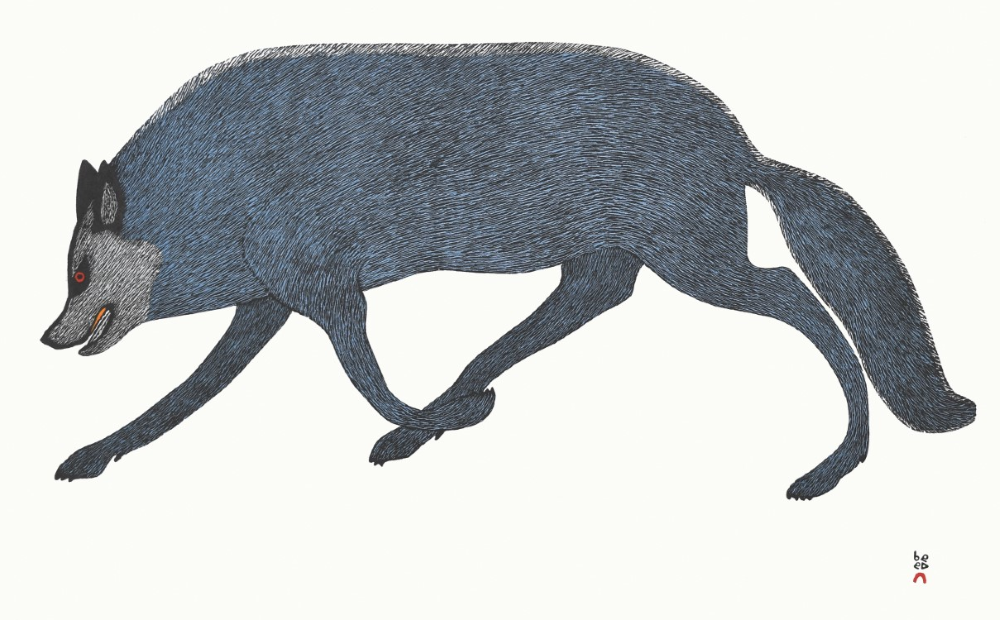 Inuit artwork on display in Beacon

Cape Dorset lies 1,573 miles due north of the Highlands. Or, to put it in more picturesque terms, Cape Dorset is an Inuit hamlet located on Dorset Island near Foxe Peninsula at the southern tip of Baffin Island in the Qikiqtaaluk Region of Nunavut, Canada.

It’s a special place. Since the 1950s, prints, drawings and sculpture created at its Kinngait Studios (formerly the West Baffin Eskimo Co-operative) have drawn an international following. For the past several years, the TheoGanz Studio in Beacon has represented the cooperative, initially at a Main Street storefront and now in a print room at 4 DeWindt St.

On Friday, Jan. 31, from 4 to 7 p.m. and again on Friday, Feb. 14, the studio will present a selection of stonecuts, lithographs and etchings. 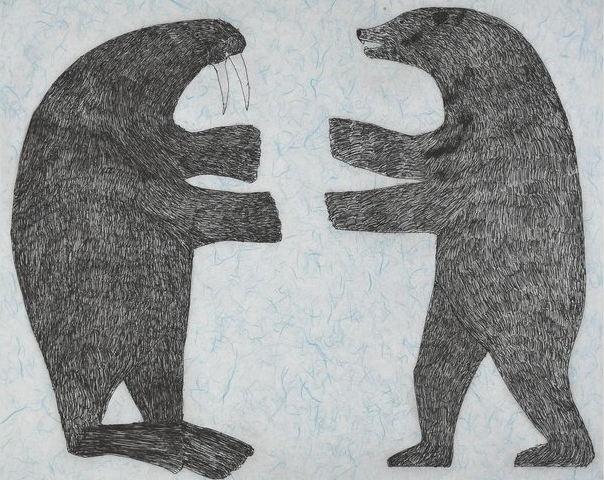 According to the cooperative, printmaking was introduced to Cape Dorset by James Houston, a Toronto artist sent to the region by the Canadian government in 1956 to develop an arts-and-crafts program.

The Inuit were already making incised ornaments and tools, as well as appliqued garments and bags, but few works were done on paper before 1957, when Houston and a few Inuit men began working on experimental prints. Seeing potential in the results, Houston traveled to Japan to study Ukiyo-e, a traditional woodblock practice in which an artist’s drawing is given to a master printer.

“Historically they were producing drawings on walrus tusks, thousands of years ago,” says Eleni Smolen, who owns the TheoGanz Studio. “Stonecut is what they’re known for — a substitute for cutting it into a woodblock print — as there are no trees, no wood up there.”

In the stonecut process, which is unique to the Canadian Arctic, the first step is to trace the drawing and apply it to the smooth surface of the prepared stone, according to a book published by the cooperative, Art of Cape Dorset. “Using India ink, the stonecutter delineates the drawing on the stone, then cuts away the areas that are not to appear in print, leaving the uncut areas raised.” 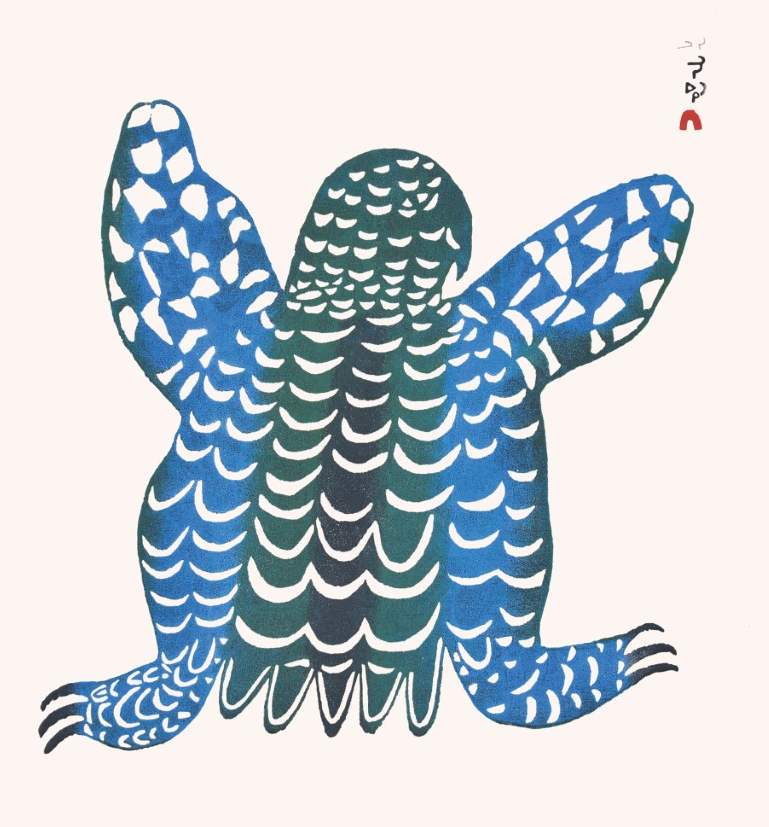 Once that is completed, “the raised area is inked using rollers, and a thin sheet of fine paper is placed over the inked surface. The paper is pressed gently against the stone by hand with a small, padded disk, one at a time.”

Stenciling, copper engraving, etching and lithography are all techniques now employed by Inuit artists, along with drawing and carving done on a metamorphic rock called serpentinite, quarried from a region about 200 miles away.

For the past 60 years Kinngait Studios, the printmaking branch of the cooperative, has released an annual collection of 30 to 60 images.

Smolen, who grew up in Canada, notes that Inuit art is “part of the culture there. There are lots of knock-offs so you have to be sure you’re buying something original and authentic. There are over 21 art cooperatives across the Arctic; Cape Dorset is the most prestigious and widely known.” 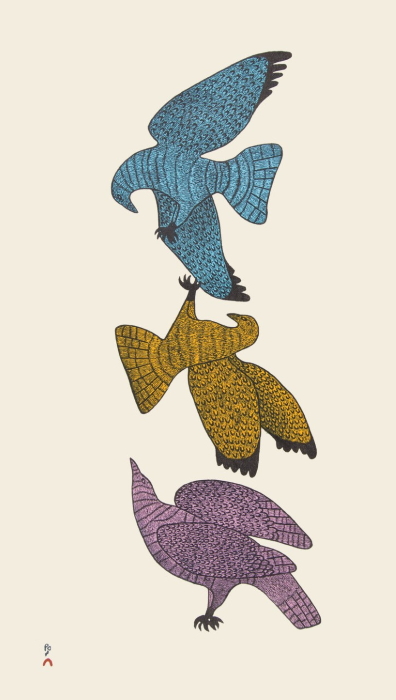 The prestige comes, in part, she says, because “it’s consistent in its release every year and the artists are generational — children pick the techniques up from their grandparents and learn to draw.”

Smolen didn’t start handling Inuit art until she opened TheoGanz. “I’m probably their smallest little dealer, but they make you feel so good, so valuable,” she says. “I can send them a query, like ‘How do I get some creases out of a print?’ and I receive an elaborate response, step-by-step. I’ve asked them to go into their archives to hunt out drawings that I can’t find, and they’re always helpful.”

To obtain the art, she travels to Dorset Fine Arts in Toronto, which was established in 1978 to act as a liaison between the cooperative and dealers. Smolen first visited the far-off community in 2018. “I realized that if I was going to keep doing this, I needed to see it,” she says.

Smolen finds the animal imagery compelling, though she notes many people relate to the humorous and whimsical prints, especially those with colorful animals. “For the most part my personal favorites are the darker ones,” she says. What surprises people the most, she says, is “the scale. You really do need to see them in person.”

Except for the two scheduled receptions, the TheoGanz Studio is open by appointment. Email [email protected] or call 917-318-2239. To browse the most recent annual collection, visit dorsetfinearts.com.