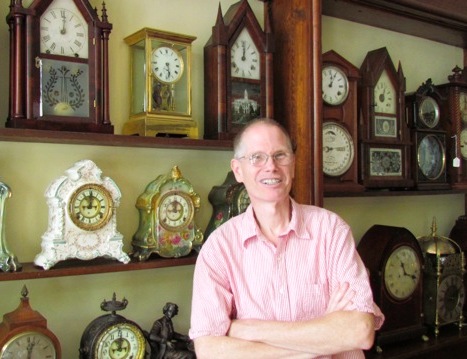 Howard Ira Broad, 67, a resident of Garrison for the past 33 years, died in Somers on Jan. 26, 2020, of complications from Alzheimer’s disease. He was the longtime owner of Country Clocks in Cold Spring.

Broad was born in Coral Gables, Florida, on Jan. 8, 1953, and raised in the Bronx, where he attended Howard Taft High School.

In an interview with The Current in 2011, Broad said he went to work at age 16 and was employed as a draftsman with Bell Telephone before enrolling in the Bulova Watch and Clock School in 1983. “They only teach watchmaking now,” he said. “There is a great need for people who can fix watches,” he said. He said he didn’t see relying on cell phones to keep track of time as a threat. “There will always be people who will want a nice watch.”

Broad opened Country Clocks at 142 Main St. in the late 1980s and operated it for three decades until his retirement in 2018.

Asked in 2011 to identify his oldest time piece, he pointed to an English Lantern clock from 1690, “the first domestic clock offered.” He was, however, unable to identify his favorite. “It’s hard to say. It’s like saying, ‘Who’s your favorite child?’ ”

Broad is survived by his spouse of 41 years, Winfried Dohle, and his extended families, the Dohles, Rautenbachs, Lohmanns and Rasches.

Friends may call on Thursday, Jan. 30, from 6 to 8 p.m. at Clinton Funeral Home, 21 Parrott St., in Cold Spring. A funeral service will be held at 11 a.m. on Jan. 31 at the funeral home, with interment to follow in Cold Spring Cemetery.