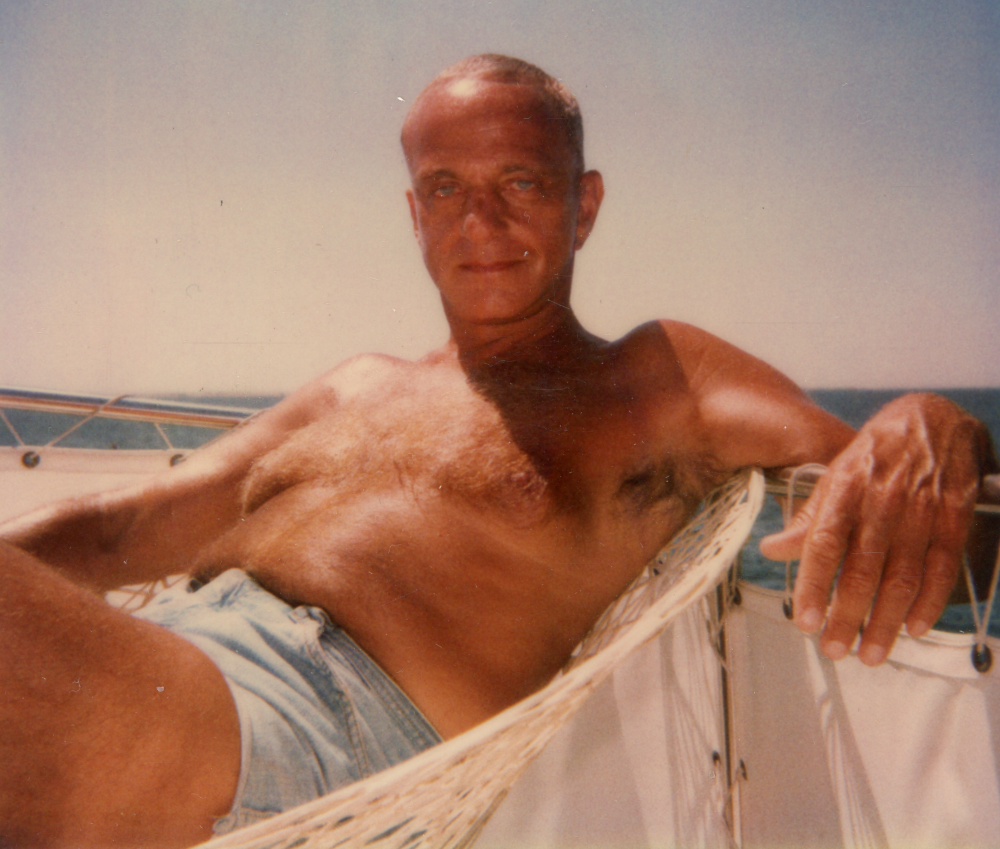 Ivy Meeropol never met Roy Cohn, but he played an important role in her life.

The Cold Spring filmmaker is a granddaughter of Julius and Ethel Rosenberg, who were executed as traitors in 1953 after being convicted of relaying details of the atomic bomb to the Soviets.

Cohn became famous as a tenacious — and often unscrupulous — 23-year-old federal prosecutor of the Rosenbergs. He cemented his reputation the following year as chief counsel to Joseph McCarthy during the U.S. senator’s infamous hearings to identify and investigate suspected communists.

Meeropol examined her family’s story in her 2004 documentary, Heir to an Execution. Her most recent film, Bully. Coward. Victim., focuses on Cohn. Distributed by HBO Documentary Films, it premiered at the New York Film Festival in September and will be shown in Garrison at a sold-out Depot Docs screening on Feb. 7. It will also be screened at the Jacob Burns Center in Pleasantville on March 28 and will premiere on HBO in June.

“I knew who Roy Cohn was from a young age, but vaguely — he was a bad guy who had something to do with my grandparents being executed,” Meeropol recalls.

Two experiences as an adult heightened her interest in Cohn and the ramifications of his life and influence. The first, which she documents in Bully. Coward. Victim., and which gave the film its title, occurred when she and her father, Michael Meeropol, visited a display in 1987 in Washington, D.C., of the 40,000 panels of the AIDS Memorial Quilt. Incredibly, the first panel they spotted was one with Cohn’s name sewn in, along with the three-word description. 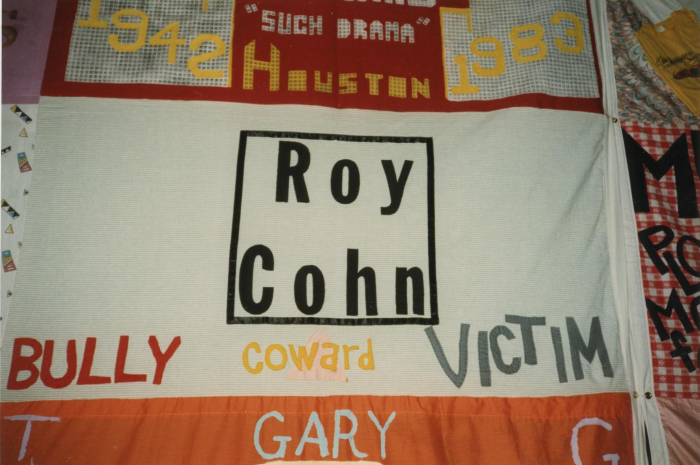 Meeropol recalls mixed feelings. Cohn’s homosexuality was revealed to the public following his diagnosis with AIDS, although he denied having the disease. He died in 1986 at age 59, five weeks after being disbarred for defrauding a client.

“When we walked up to the quilt,” Meeropol says, “my feeling was, ‘Oh good, the bastard,’ then, ‘Oh, the poor guy.’ I wanted to capture that same conflicting feeling in this film.”

Meeropol says her parents were supportive of her making the film, though her father (who also lives in Cold Spring) asked: “Do you really want to spend all this time thinking about this horrible person? Why don’t you have some fun?”

Her father and his brother, who were adopted following the death of their parents, are central figures in the documentary. (It is dedicated to her mother, Ann, who died in May.) Although records from the Soviet Union years later showed that Julius Rosenberg had been a spy, the brothers for years have fought to clear their mother’s name. 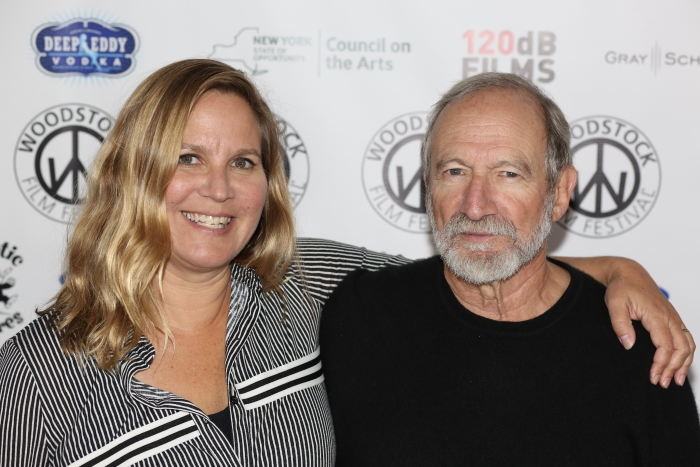 Ivy Meeropol with her father, Mike, at a screening of her documentary last fall at the Woodstock Film Festival (Photo by Laura Revercomb)

After spending several years delving into Cohn’s background, motivations and how his influence is felt today, Ivy Meeropol says she still considers Cohn to be the embodiment of the three words from the quilt: bully, coward and victim.

“I know it’s controversial, but to me anyone who cannot be themselves, and live life as they wish to — any gay person, anyone forced to hide and suppress themselves because of societal judgments — is a victim,” she says. “It doesn’t mean I forgive him. He certainly suffered because of that. Not to psychoanalyze, but that suffering turned him into a monster, but anyone who dies of AIDS is a victim.”

As Tony Kushner, the playwright who depicted Cohn in Angels in America, says in Meeropol’s film, “You can dislike the man, expose him as a monster, but there’s nothing gained or learned by just presenting him that way.”

Seeing Angels in America was the second experience that provoked Meeropol to learn more about Cohn.

“My family and I were invited to see it, and we were blown away,” she says. “Once I started making documentaries, I always had 10 ideas popping around in my head. It was always in the mix, because I kept wondering, ‘Why has no one made a film about this guy?’ There was a scripted narrative film, but no good in-depth documentary treatment.

“I hoped someone else would do it, because I didn’t want to. I didn’t want to revisit my family’s story — I had already done it with Heir. But Cohn’s so fascinating as a figure in American history. He intersects with almost every major movement and trend from 1945 through the mid-1980s, from the rise of conservatism to the ’70s disco years.” 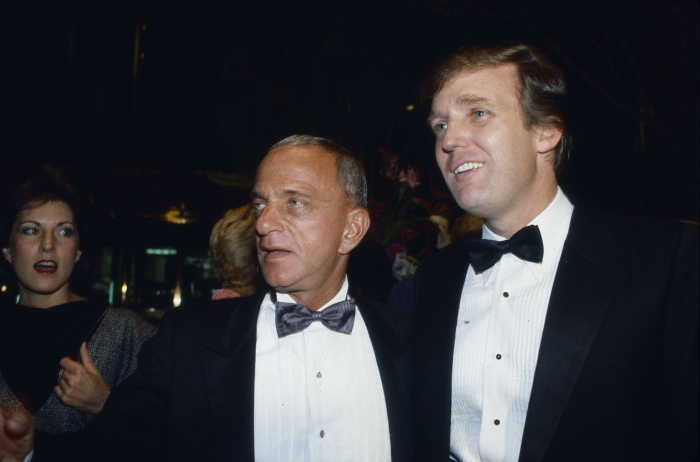 She says she resisted the idea until the election of President Trump. “I woke up the morning after the election and thought ‘I have to make this film,’ ” she recalls. “I had a such a unique perspective. I remember a group of my friends got together and asked each other, ‘What are we all going to do now?’ I decided that I would channel my rage and fear” about the election.

Bully. Coward. Victim. is not a chronological narrative. Instead, it takes a fragmented approach, mirroring the revelation of the many strands of Cohn’s duplicitous life, including his connections to the mob; his hedonistic life over summers in Provincetown, Massachusetts; and his decades-long relationship with Donald Trump as his personal lawyer.

“I wanted to move around in time, weaving my family’s story in and out but never having it dominate,” Meeropol says. “We skipped the 1960s — Cohn spent a lot of time being indicted. I started calling it an impressionistic biopic.”

While conducting research in Provincetown, Meeropol connected with Peter Manso, a journalist who had interviewed Cohn at length and still had the tapes. “Until I found Manso and the tapes of Cohn talking about his life conversationally, I didn’t know I had a film,” she says. “Those are the kind of things that are so exciting about making a documentary: the hunt, the discovery.”

She is part of the film but says she decided early on that, unlike Heir, it was not about her journey. “It’s not like I’ve been haunted by Roy Cohn, nor has my father, but it’s about using my family to understand the power and recklessness that this man had, and its deep impact,” she says. “This is my dad’s story in many ways. This film had to be about my father helping the audience understand what happened to him and his parents.”