The work on the Howland Cultural Center in Beacon, like any historic structure, is never finished.

“We are always in a process of fixing,” explains Craig Wolf, the board president for the nonprofit HCC, which moved into its home on Main Street after the library moved out in 1976.

The building, which was the first in Beacon to be added to the National Register of Historic Places and has been described as Norwegian Gothic in style, was designed as a library in 1872 by Richard Morris Hunt at the bequest of his brother-in-law, Joseph Howland, a Civil War general and former state treasurer. 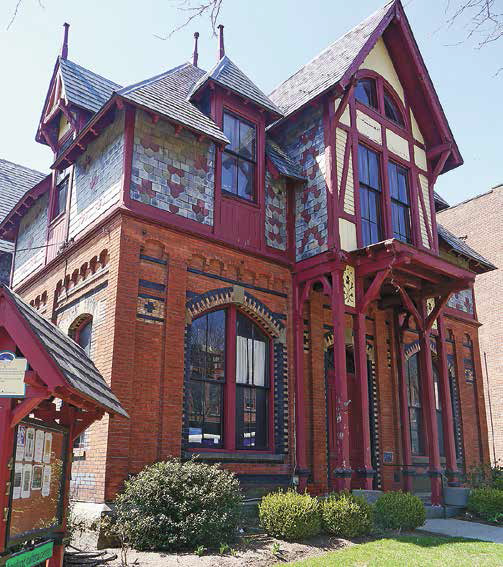 After the library decamped a century later, it took three years to organize an effort to convert the building into a cultural center. That work has continued during the 40 years since, including an overhaul years ago of the slate roof, which was “hugely expensive — we’re hoping it will last a very long time,” Wolf says.

In earlier days, he says, HCC received a good deal of support from the Beacon Community Development Agency because it was on the historic register and also in a census tract defined as lower income. Community development is now overseen by the Dutchess County Department of Planning, and the center relies more heavily on state grants and private fundraising. (It held its first gala last year and raised about $21,000.)

Along with its fundraising, the HCC board has set aside funds over the years to take care of the building and pushed ahead with four major projects.

The building’s 147-year-old floor was restored. “We had to work with a contractor called Strictly Hardwood, even though our floor is soft wood,” Wolf says. “In the old days, when forests were younger and harvesting was newer, they’d cut long pieces, because they were cheaper to install.” The contractor replaced the floor in certain spots where it was worn down, then sanded and stained it to match the original, before finishing it with coats of polyurethane.

The gas-fired heating system was replaced with twin furnaces. “It’s much more efficient,” Wolf says. “We’ve seen a drop in the bills for the past couple of years.”

“This building is quite remarkable in that we have two ways to heat it: gas and geothermal,” Wolf says. Installed a decade ago, the geothermal system “involved drilling five water wells in the side yard,” he says. It provides not only heat but air conditioning. “The building had been hard to use in the summer,” he says. The geothermal needed upgrading; because the main pump had failed, and the technology has advanced, the board decided to redo the entire system.

The rehabilitation of the building’s front portico and central façade (the front doors and everything above them) remains on hold until warmer weather returns. 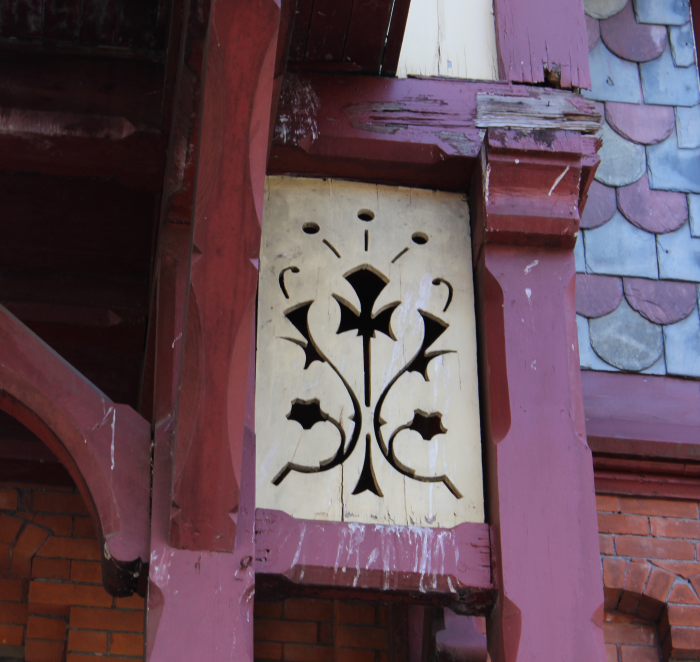 Some of the damage at the entrance to the Howland Cultural Center that its board hopes to have repaired. (Photo by A. Rooney)

“There’s a considerable amount of deterioration in some of the wood,” Wolf says. “We’ve done temporary repairs, but we want to do it well and right and restore some missing features. We’re likely to use epoxy consolidation, a process of injecting a compound into the wood which hardens up, and you shape it. It’s a cross between wood and plastic, so it’s solid and unlikely to rot.

“We’re using skilled and time-consuming techniques because we don’t want to throw some 2-by-4s on it,” he says. “In some cases, we’re not sure how much deterioration exists until contractors start tearing it apart.”

The HCC has scheduled its second gala for May 14 and is hoping for another fundraising success. “So much [work] needs to be done,” Wolf says. “We’re building our shopping list.”

The list includes window rehabilitation, replacement of some brickwork, other woodwork around the building and “minor projects hither and yon: some look like maintenance, some bigger money,” Wolf says. “When we get into projects it’s hard to talk about how much they would cost because we haven’t had a professional or specialist in preservation do the research. But obviously we’re looking at the upper six figures and beyond in the coming years.”

The building will celebrate its 150th anniversary in 2022, which will be linchpin for a campaign. But for now, Wolf says, “people who have contributed can be pleased with how much got done for good value.”