The measure won’t appear on a ballot this year, but at least some of the nine members of the Beacon City Board of Education believe their board could stand to shrink.

The discussion has come up in recent years around this time, as the district prepares for the May vote on its budget and other issues.

A change to the number of board members would also require voter approval, but one of two things must happen to get the issue on the ballot: the board must vote to add it, or a petition with the signatures of at least 500 district voters must be presented.

If voters approved the change, it would go into effect in July of the following year.

There are compelling arguments both for the status quo or a reduction, said school board President Anthony White. For instance, board meetings might be shorter with fewer members. Even with a fairly routine agenda, the board met for more than two-and-a-half hours on Feb. 10. Four years ago, when the district lost its sixth permanent superintendent in 10 years, meetings often went past 11 p.m.

On the other hand, a smaller board might not represent all of the district’s constituent groups.

“Board members should always try to reach out to all stakeholders,” regardless of the board’s size, White said, “but I could understand why someone would have that fear. Changing the board isn’t a pressing issue for me, but I would be in favor of it if it came up for a vote.” 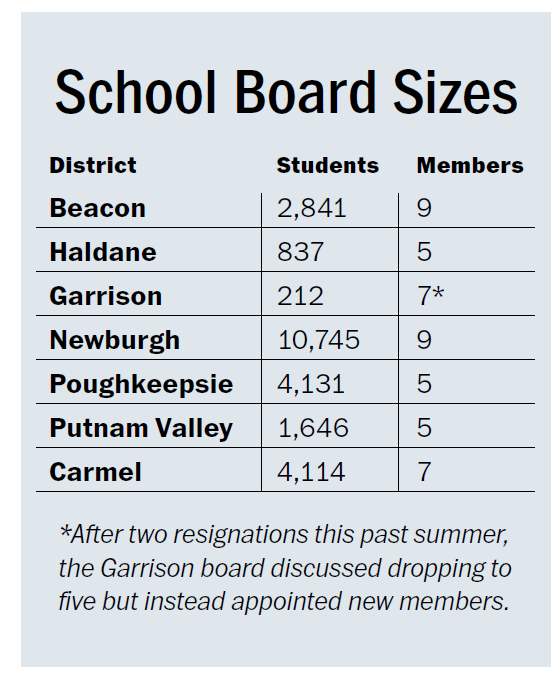 The Beacon district is one of 133 of 690 districts in the state with a nine-member board. There are also 378 seven-member boards and 165 five-member boards. Only New York City, with over 1 million public school students, has more than nine members, at 13.

Meredith Heuer, the Beacon board’s vice president, has been one of the more vocal advocates for fewer members, citing a lack of candidates as one of her reasons.

“Not all of our recent elections have been uncontested, but many have, and I worry that board members are scrambling to recruit people to run this time every year,” she said. “That doesn’t feel like a true democratic process.”

Last year, Heuer, Michael Rutkoske and Antony Tseng ran unopposed for re-election. In 2018, newcomers Elissa Betterbid, James Case-Leal and Flora Stadler were elected from a six-candidate field, and in 2017 four incumbents ran unopposed and were re-elected.

Tseng, who was first elected in 2016, has said he believes the board should stay at nine to encourage diverse representation. During the board’s Jan. 27 meeting, he also pointed to the 17 seats that board members fill on various committees.

“How many extra committee meetings would you want to go to with a smaller board?” Tseng asked.

Losing members “is much less the norm,” he said. “It’s usually related to some specific issue that a community is facing.”

In Beacon, Case-Leal wondered on Jan. 27 whether a finite volunteer pool could be that catalyst.

The members of the board “represent a certain amount of the people who are dedicated to service,” he said. “I have no doubt that if this board was smaller the people on this board would go on to do service in other parts of our community. I’m thinking about the larger needs.”