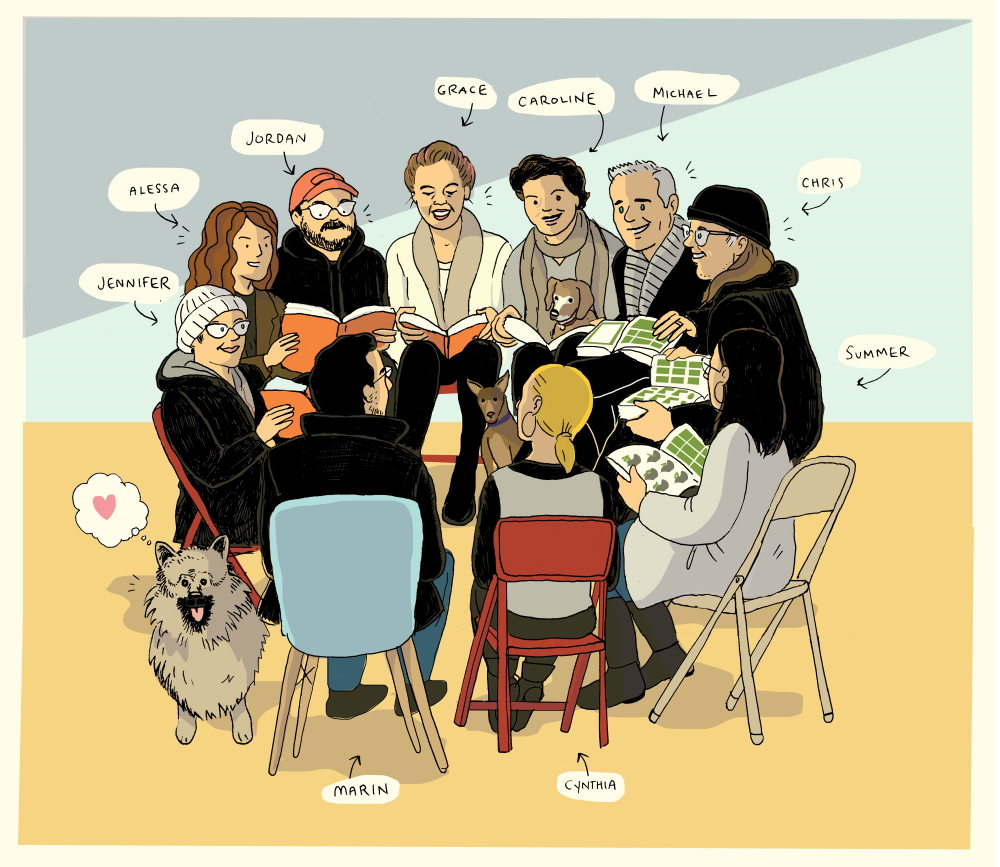 Graphic novels are no longer relegated to the dim recesses of bookstore aisles. And the people buying them aren’t always monosyllabic adolescents. That was clear from the group which turned up on a Tuesday night at Split Rock Books in Cold Spring for a monthly Graphic Novel Book Club session for adults.

Led by cartoonist and writer Summer Pierre, author of All the Sad Songs and the Paper Pencil Life series (and a too-infrequent contributor to The Current), the participants are here given the most rudimentary descriptions in an attempt to avoid mismatching names and quotes. They were:

■ Grace: Caught a break on Grace, who owns Supplies for Creative Living, just up Main Street

■ Michael: Black jacket, black-and white-scarf, lives in Cold Spring, been coming to these sessions for a year, working on a book

■ Marin (had the smarts to spell it out: “Martin with no T”), glasses, married to Jennifer

■ Chris, a longtime comics editor, and

■ Caroline, accompanied by Hans, her dachshund

The topic was Ulli Lust’s Today is the Last Day of the Rest of Your Life, a gritty memoir chosen by Pierre “because it’s a wonderful example of what can be achieved in graphic form. Ulli lives in Berlin and she was the editor of an online German comic collective, and she serialized this online. She just came out with her second memoir, which is also phenomenal and amazing. 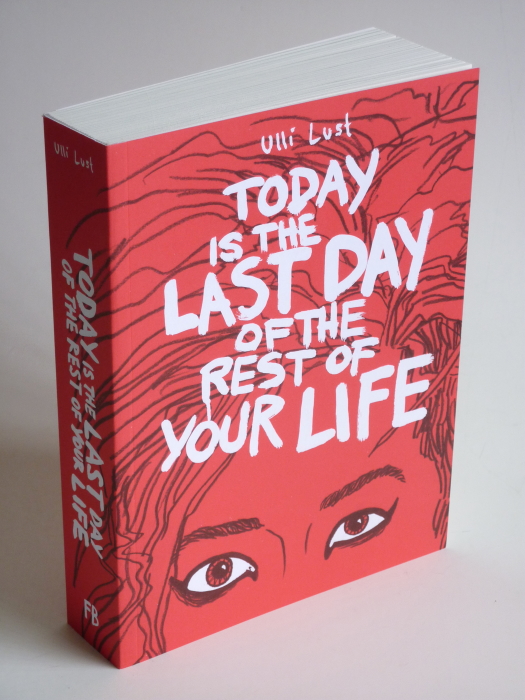 “This book requires time, which comics don’t always require,” Pierre explained. “As a result, it’s a rich and deep experience. Reading it again made me realize how many people try to do something like this. Did anyone really dislike it?”

No hands were raised, but Jordan said: “Enjoy is a weird word for it. I feel like there’s a central toughness to her that makes it much more bearable. This made me angry,  but you’re freed a little by the strength there. She’s willing to go out on this journey — strike out and do this stuff.”

Because the book is mostly drawings, the visuals filled half the conversation.

Marin: “When you asked if anyone disliked it, did you mean the art or the story?”
Summer: “That’s interesting – that there is a separation between the two.”
Jennifer: “I’m mixed on it. I found the story content frustrating, but I liked the grunge-style art.”
Grace: “She captured the drifting aspect of being a teenager, and the way she’s drawn, you don’t even have to hear what she’s saying.”
Michael: “Her storytelling abilities are so inspiring and impressive.”
Alessa: “I like the way her legs have wiggly things on them when she’s angry. I love how languages are expressed. In the beginning, Italian is just squiggles.”
Summer: “Then it goes to loopy cursive. It has many interesting arcs.”
Caroline: “The content is brutal. In this case so many images stay in my mind.Her reactions — the drawings of people’s faces, secondary characters, passersby — are very vivid.”
Michael: “I can’t believe how much she can do in terms of sense of place. I feel like I’m there. The style changes as it goes along.”
Grace: “I kept coming back to the colors. The sickly green.”
Cynthia: “The colors of camo; walking in the woods.”
Jordan: “Very military surplus.”

And then there were matters specific to this form.

Summer: “It’s a large book. A lot of books we’ve read are quick reads. An author once told me that a nine-panel grid makes the reader slow down.”
Jordan: “There is good movement from panel to panel. She can convey movement, motion, transformation. Like when the skull emerges.”
Michael: “I originally read this on ComiXologyn [comixology.com]. I read it on my phone. Print is my favorite, but it was kind of cool because on my phone it gives you each individual panel.”
Chris: “Sounds exhausting!”
Summer: “I was thinking of her choice of using pencil. When she scans it in, she takes all the gray out. A lot of people say you should never cartoon with pencil, but what a different experience it would have been in ink: harsher and more bleak.”

Yet, ultimately, like any tale told, it comes down to story + characters + how they’re depicted. There’s plotting:

Summer: “She’s so lucky she’s alive. The fact that she escapes that mafioso house is like, nuts.”
Jennifer: “Right before the monk dies, she meets this guy from Gambia and goes with him. Turns out he’s a decent guy.”

Chris: “I was impressed that you could survive on the street, and that you could go into a restaurant and they’d give you food.”
Summer: “She must have smelled …so much. She didn’t shower the whole summer, and she has one outfit.”

And, ultimately, there’s an emotional response (or not):

Summer: “I kept waiting for woundedness and was surprised that by the end it wasn’t there.”
Jordan: “It’s presented non-judgmentally. She’s clear-eyed about herself at that age. I’ve done some stuff [comics] about high-school-age me, and I tend to skewer myself because I’m mortified about who I was.”
Chris: “If I had to tell a story about this age … It’s a beautiful book. I feel like it is sort of hopeful.”

Split Rock Books is located at 97 Main St. The selection for the next session of the Graphic Novel Book Club, scheduled for 7 p.m. on Tuesday, Feb. 18, is You & a bike & a Road, by Eleanor Davis.