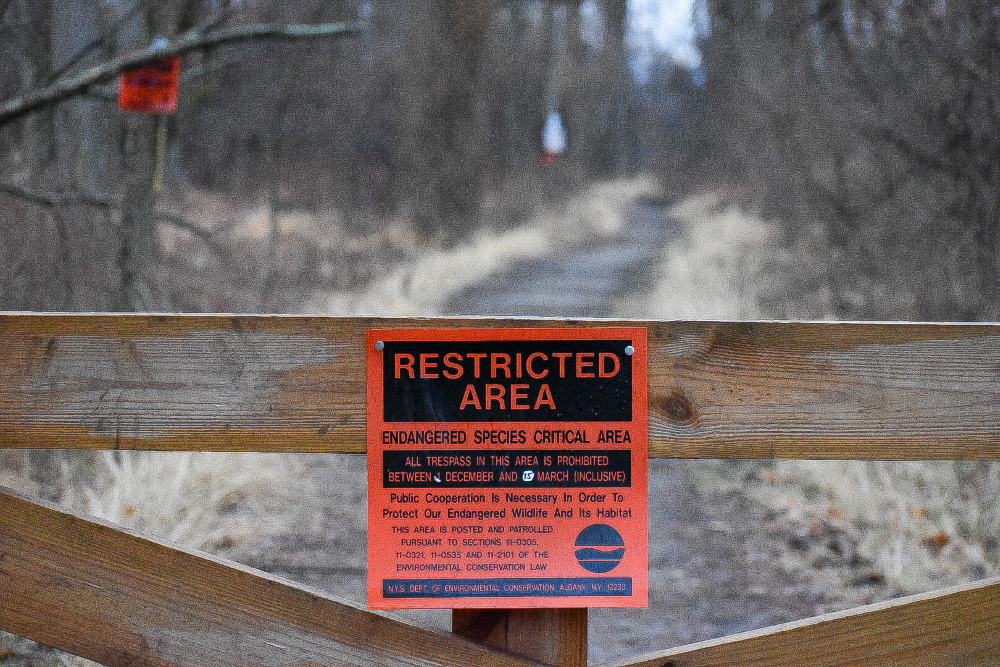 Dennings Point is closed each year from Dec. 15 to March 15. (Photo by B. Cronin)

There’s a fox den on Dennings Point, although I won’t tell you where.

I discovered it two years ago, during a spring run, when half a dozen kits came bounding down the trail as if I were a long-lost playmate.

When they figured out I wasn’t a bipedal, hairless fox, they turned tail. When I ran past the part of the woods they had disappeared into, I could see them peeking out at me, and an adult fox standing over them.

I didn’t see them again until this past November, as I was running at twilight. I had just put on my headlamp when I heard something off-trail. Swinging around, the beam illuminated the same part of the woods where I had seen the den two years before. Six adult foxes stared with glowing eyes.

For such a small thumb of land jutting into the Hudson, Dennings Point has a wide variety of wildlife. I’ve seen plenty over the past 12 years: Foxes, deer, rat snakes, raccoons, possums, coyotes, barred owls and a snapping turtle so big I could have fit a saddle on it. And, of course, the bald eagles.

The bald eagles are why I don’t run at Dennings Point during the winter. Each year, from Dec. 15 to March 15, the point is closed by the state Department of Environmental Conservation. This is done to protect the bald eagles, who may no longer be on the federal list of endangered species but remain on the state’s. Winter is roosting season, when they are most vulnerable.

Food is scarce, and the eagles need to hunker down and conserve energy for spring breeding. Birds that are constantly flying away after getting spooked by humans — even those running as slowly as I — are eagles that likely won’t be laying eggs.

Some eagles seem perfectly fine around humans and choose to set up their nests in high-traffic areas. At Bowdoin Park in Wappingers Falls, which is full of secluded, marshy areas, a pair of bald eagles nonetheless chose to nest overlooking the playground. Perhaps they like to go down the slides at night, but Evan Thompson, manager of the Hudson Highlands State Park Preserve, notes it’s not typical behavior and that it’s best to protect nests whenever possible.

That’s why the state closes Dennings Point, and also why the east side of the point, where the bald eagle nest is located, is closed year-round.

Thompson knows this isn’t the most popular decision, so the agency has tried to make Dennings Point accessible in other ways, such as paving the majority of the trail last year to make it passable for wheelchairs. The state also constructed a blind near the ruins of the paper-clip factory that offers seclusion and protection to birders who want to gaze across the bay.

When I asked if park employees can enter the park when it’s closed, he let out a weary sigh. “I guess you saw the Facebook thread,” he said.

I had. In a group devoted to Beacon, someone last month posted a photo of the closed Dennings Point gate after a snowfall. Numerous footprints tracked past the gate. The conversation that followed included typical Facebook fare such as neighbors blaming neighbors, lazy stereotyping, false information and residents proclaiming they will go to Dennings Point anytime they damn well please.

Thompson said park employees do not go into the point during the winter unless it’s an emergency. But I can understand the frustration. For people who have been coming to the point for their entire lives, it can feel like something has been taken away by strangers. Much of the hostility that longtime residents of any place direct at newcomers and tourists seems to arise from the same question: Do you love this place as much as we do?

In the spirit of Valentine’s Day, I’d like to suggest that we leave Dennings Point to the eagles over the winter. I’m not a Beacon native, but my son is, and we’ve spent many happy hours down at Dennings Point. I would like to make sure the eagles are still there for him and his children, and it’s wonderful to have something to look forward to. Spring is just around the corner, and absence, as always, makes the heart grow fonder.

One thought on “Out There: Love It and Leave It”