Boys and girls both fall in first round of tournament

The Beacon High School boys’ basketball team, seeded No. 13 among 20 Class A teams in Section 1, put up a fight for three quarters against No. 4 Poughkeepsie on Friday (Feb. 21). 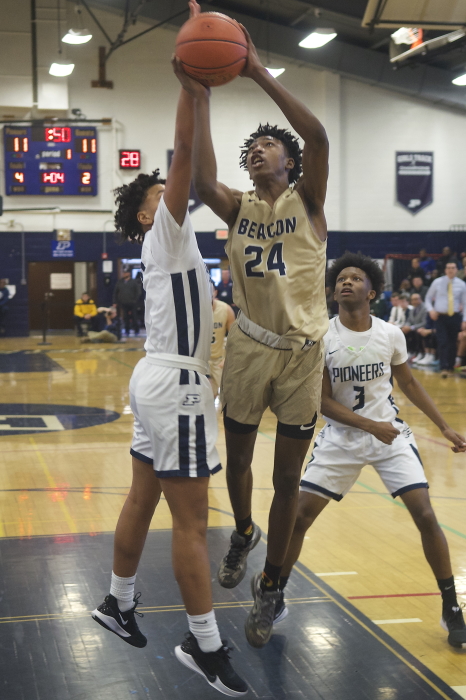 Quazir Hayes, shown here in the first quarter against Poughkeepie, was named to the All-Conference, All-County and All-League teams. (Photo by S. Pearlman)

It wasn’t enough to upend the defending state champs, however, as Poughkeepsie (18-6) controlled the fourth quarter to win, 78-57, in the first-round playoff game at Poughkeepsie High School. The Pioneers defeated No. 5 Lakeland on Feb. 26 and on March 4 will face No. 1 Tappan Zee in the semifinals at the Westchester County Center. The section’s other two surviving Class A teams are No. 3 Rye and No. 7 Pearl River.

The Bulldogs (9-13) executed their game plan well in the first half and trailed by only six points, 37-31, at the break. The team kept it close in the third but a disputed call that went Poughkeepsie’s way cost the Bulldogs.

“We had a chance to be within five points to start the fourth, but instead they’re up nine,” said Coach Scott Timpano. “They struck fast on a few possessions, and the game was over.”

The Pioneers hurt Beacon from three-point range, hitting 10. They also outrebounded the Bulldogs, particularly on the offensive end.

“We battled tough in the first half, and worked hard for every point,” said Timpano. “But Revelation [Garriga, who led Poughkeepsie with 21 points] had five of their 10 three-pointers. We didn’t locate him on the outside.” 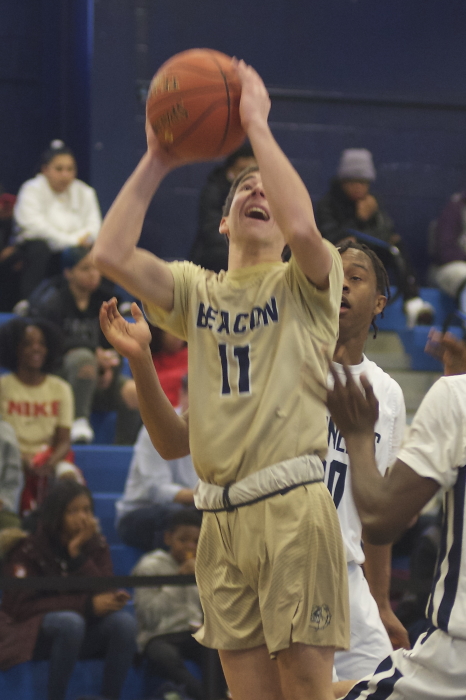 Shane Green (11) and teammate Quazir Hayes were named to the All-League team. (Photo by S. Pearlman)

Quazir Hayes and Shane Green each had 13 points for Beacon, while Tristen Reid added 12 points and three assists, and Ian Bautista had six points and seven rebounds.

Timpano said he was happy with his team’s performance, particularly how the Bulldogs gained momentum down the final stretch of the season, winning six of their last eight games before facing Poughkeepsie.

“If you had told me early this season that we would get nine wins and have a decent chance at beating Poughkeepsie in sectionals, we would have signed up for that,” the coach said. “So we’re pretty pleased with how the year turned out.”

The girls’ team, seeded last out of 20 teams in the sectional tournament, also saw its season end on Friday with a loss at No. 4 Harrison in a Class A first-round playoff game. The girls had advanced to the first round with an upset victory on Feb. 15 over No. 13 Somers. 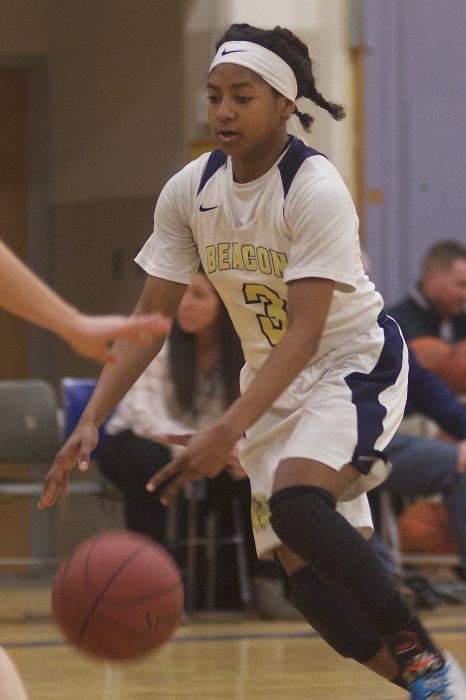 Dior Gillins had 15 points to lead the Bulldogs against Harrison. (Photo by S. Pearlman)

Beacon finished with a 9-13 record, while Harrison (16-6) went on to defeat No. 5 Byram Hills to advance to the semifinals against No. 1 Rye. The other Final Four teams are No. 6 Pearl River and No. 2 Hendrick Hudson.

Against Harrison, the Bulldogs had trouble getting into any kind of offensive rhythm. “We couldn’t finish,” said Coach Christina Dahl. “We had opportunities.”

Dior Gillins led Beacon with 15 points, and Grace Affeldt and Devyn Kelly each had six. Gillins, Affeldt and Annaliese Compagnone were named All-League.

Dahl said she liked her team’s persistence through the season. “I’m proud of the effort,” she said. “Our six seniors leave some big shoes to fill, and we had a great run to end the season.”