There are nearly 100 names of Beacon residents who died in wars on the bronze marker in front of the veterans’ Memorial Building at 413 Main St.

Twelve soldiers died in World War I; 67 more in World War II. About a dozen perished in Vietnam. There was only one local soldier, however, who died in the Korean War: Anthony Scalzo.

A 21-year-old private, Scalzo was wounded in action in December 1952. “Somebody needed to go over the hill to see if the enemy was there,” said Sandy Scalzo, who in 1979 married one of Anthony’s nephews, “and they were. He died a hero. He volunteered.”

Later this spring, the city will install a second, slightly smaller street sign on Henry Street to honor Anthony and the rest of the Scalzo family, generations of whom lived there over nearly a century, until last year, when the last Scalzo family member living on the street put his home  on the market.

After learning that her cousin planned to sell the home, Nicole Scalzo, a fourth-grade teacher in the Wappingers Central School District, contacted the Beacon City Council to ask about renaming the street for her family.

“I didn’t have the money to buy the house,” said Scalzo, the great-granddaughter of Salvatore and Eleanore Scalzo, Anthony’s parents, who moved to Henry Street in the 1920s. “But I had to do something. I wanted people to know there was history on this road.” 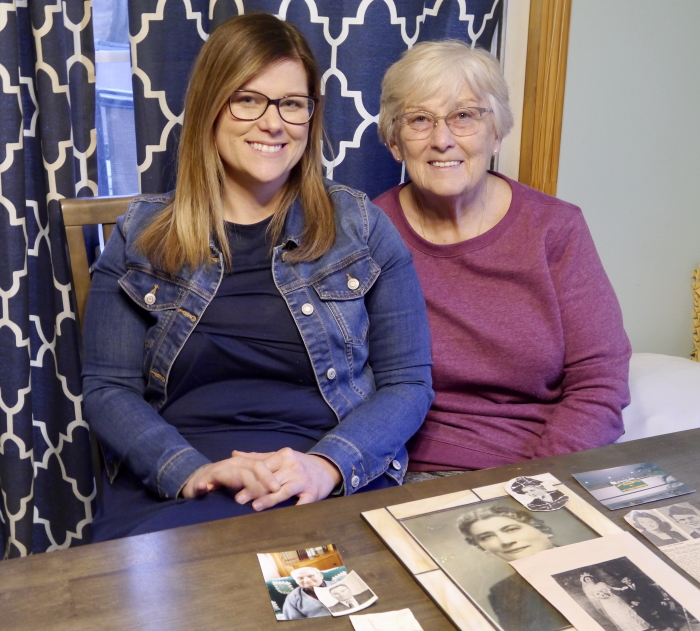 Nicole Scalzo and her mother, Sandy, with family photos (Photo by J. Simms)

In February the council told her the street name couldn’t be changed; it has established businesses, and renaming it after so many years could hinder emergency services. But the council did approve an honorary name: Scalzo Way.

When Salvatore Scalzo immigrated to New York from Italy as a 14-year-old around 1904, a number of his siblings had already made the voyage.

“His mother raised silkworms, and when she had enough silk to make some money, she would send another one of her kids to America,” explained Sandy Scalzo, Nicole’s mother.

Salvatore settled in an area between Cold Spring and Beacon then known as Storm King, where he met Eleanore Chiarella, who later became the local postmaster (and his wife). The couple moved into Beacon, which had been incorporated just a few years earlier. There they bought a house on the north side of Henry Street, on a parcel that is now the Health Center parking lot. Around 1930, they moved the house by horse and carriage to the other side of the road, where it remains.

Salvatore was for decades the caretaker at Bannerman’s Island, as well as for other mansions along what is now Route 9D. He died in 1992, a month shy of his 103rd birthday. Another of his sons, Salvatore Jr., received two Purple Hearts for his service in World War II and, upon returning home, worked for IBM for decades.

Nicole Scalzo’s request to the Beacon City Council was not the first of its nature. Last year, the council was asked to name two Memorial Park baseball fields: one to honor Shawn Antalek, a lifetime member of the Mase Hook and Ladder Co. and longtime coach who died in 2010 at the age of 48, and the other to remember Jack Dexter, a three-term Dutchess County supervisor and four-decade member of Beacon softball leagues, who died in August.

Both requests were approved, but the frequency of renaming asks led the council to adopt a policy to manage future appeals. 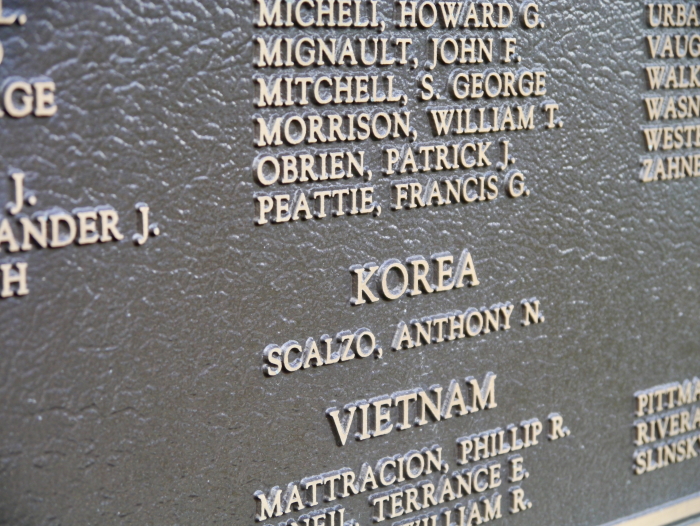 Anthony Scalzo is remembered on the Beacon War Memorial on Main Street. (Photo by J. Simms)

“The naming of a public asset is an important and long-lasting decision for a community, and should not be undertaken haphazardly or simply at an interested party’s request,” Mayor Lee Kyriacou said. “Some choices are obvious — naming Beacon’s waterfront park after Pete and Toshi Seeger — but the choices should be based on a consistent process and standards.”

The policy states that the naming or renaming of a city asset should assist the public in identifying its location and may be related to significant events, people or places. Requests for honorary street names are subject to review by local historians and, after 15 years, the city can reevaluate whether to keep the name.

Many places in Beacon already bear the names of historical figures. J.V. Forrestal Elementary School, for example, was named years ago for James Forrestal, the country’s first secretary of defense, who was born in 1892 in Matteawan, which is now part of Beacon.

Not all new requests “have to rise to that level,” City Administrator Anthony Ruggiero said, but they should honor “people who invested their lives in contributing to the betterment of the city.”

As Beacon grows, Sandy Scalzo believes her family’s ancestors fit that bill. It’s important to remember the immigrants who helped build the city, she said: “I don’t think in his wildest dreams Salvatore would have imagined his family being as successful as it was. They flourished using sweat and blood.”