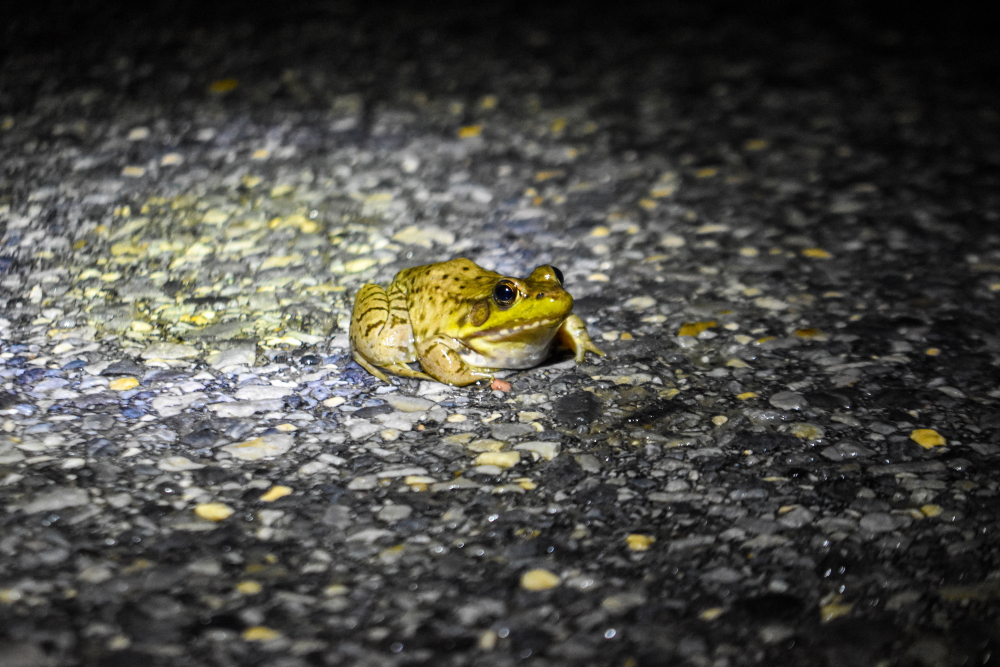 Why the frogs crossed the road

The call came in during Chess Club: The amphibians were on the move. The game was forfeited, beers were abandoned, the bar tab was paid, and we ran out into the rainy night.

This past Tuesday (March 10) was the first Big Night of the year, when the spring migration season begins for frogs, spring peepers and salamanders. On the first rainy night following a few days in which temperatures hit at least 40 degrees, amphibians emerge en masse from their winter hibernation to find vernal pools for breeding. Still sluggish from their winter naps, they don’t move fast, which can be a problem when crossing roads as oblivious drivers run them over, also en masse.

Enter squads of scientists and volunteers who spend those nights with reflective vests and flashlights, running up and down roads in the rain to shepherd the sleepy amphibians toward wetlands and eros. It’s essentially a live-action recreation of the 1980s video game Frogger, including the fact that you could get hit by a car. 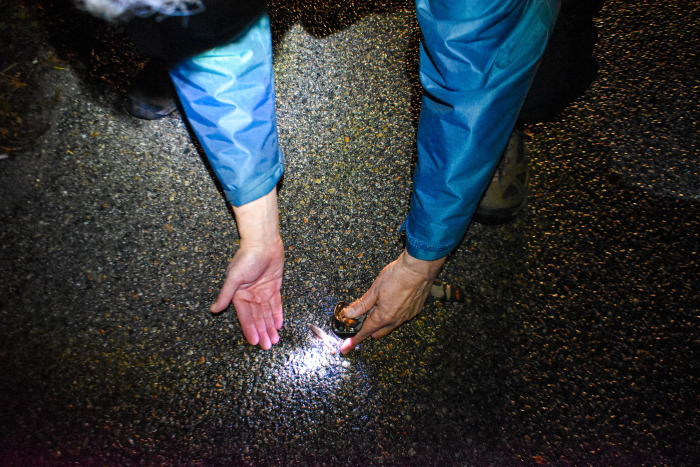 Months ago I had mentioned to a few environmentalists that I would love to tag along on Big Night, but I was warned that the Highlands’ microclimates make predicting exactly when the season kicks off almost impossible. The past few weeks have been peppered with email chains and group chats. With its unusual warmth, Feb. 25 was a candidate for the start of the season, but except for a few toads at Bear Mountain, nothing was moving.

Tuesday night was also a possibility, but the probability looked low. That’s how I ended up at Quinn’s in Beacon. I was playing chess against Nicole Wooten from the Hudson Highlands Land Trust when she got the call. Soon we were driving south by Breakneck Ridge, the air still heavy with the smell of brush fire, swerving around the occasional frog dashing across the road.

By the time we hit Cold Spring, we had a dilemma: There was a guy named Joe who lives on Secor Street who had been part of the loose group of volunteers, but neither of us knew him. Surely one doesn’t just show up at a stranger’s house at 9:30 p.m. on a Tuesday with nets and a bucket, point toward a still-running car, saying, “Get in — we’re going frogging!”

Two minutes later, Joe Hirsch was in the backseat.

“I brought spatulas,” he said, holding up a bag.

When we reached the intersection of Fishkill and Lake Surprise roads, we rolled down the windows and were instantly hit with a wall of sound: The high chirps of hundreds of peepers, accentuated with the low quacks of wood frogs.

Lew Kingsley, a retired arborist and a veteran of many a Big Night, was waiting for us. He had just caught a spotted salamander — 6 inches long, brilliantly purple with bright yellow dots along its back, looking like it had been created by Dr. Seuss.

The roads were dotted with peepers, which are tiny and blend in with the pebble-speckled pavement. It was similar to foraging for mushrooms: Once you find one, your brain adjusts to the pattern and suddenly you see them everywhere. 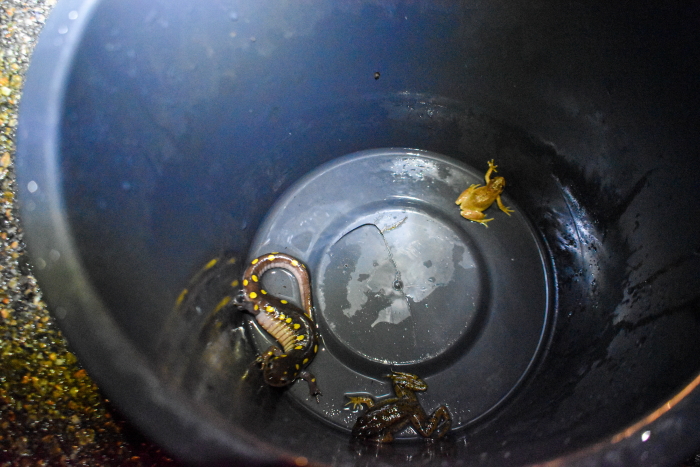 “They’re so tiny and they’re the ones making the big noise,” said Lew as the four of us scooped up peepers in our hands and gently carried them to the side of the road. The rule of thumb is to carry the frog in the direction it was going, even if it looks like there’s no water in that direction. You have to trust the frog knows more than you do.

It was hard not to feel a swell of wonder and joy for every peeper or larger frog that we carried off the road. The flip side of that was the feeling of despair when we reached the sections of Fishkill Road that were covered in the Jackson Pollock splatters of frogs we didn’t get to in time.

Also depressing: Attempting to identify the deceased amphibians via splat. “The crows will be here tomorrow,” said Lew. He pointed to a smudge on the side of the road. “Somebody actually drove up onto the shoulder to get that one.”

We spent about two hours at the intersection moving frogs before Lew suggested we drive about a half-mile to another hot spot, but our speed never reached beyond a mile an hour. We kept having to stop to clear the road of more frogs. “One thing we’re not gonna catch tonight is a speeding ticket,” said Lew.

Over the next few weeks there should be many more mass migrations on any rainy night after a warm day. The state Department of Environmental Conservation has guidance at dec.ny.gov but in brief: Wear something reflective, have flashlights, and don’t do this on the highway. You can scour online maps for wetlands, but note that many of the amphibians will be on their way to temporary vernal pools. 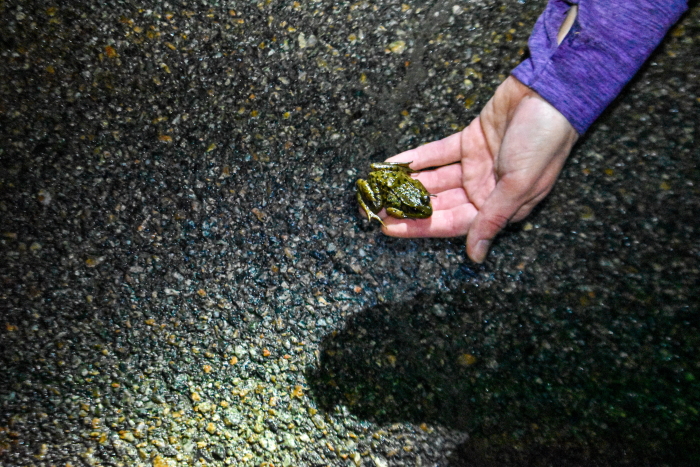 As Nicole explained to me, without those pools, amphibians wouldn’t exist. They are among the most threatened habitats since there’s little legal protection for them, unlike year-round wetlands. The amphibians keep the local insect population in check as well as provide critical food for larger animals.

“Losing these amphibians to habitat fragmentation has a cascading effect on all trophic levels, up and down,” she said. “And they’re our canaries in the water-quality coal mine.”

Our final tally for the evening was that we saved about 100 peepers, 10 green frogs, three pickerel frogs, three great tree frogs, three American bullfrogs, a wood frog and that brilliant purple salamander. Lew was satisfied.

“I think we won tonight,” he said.

6 thoughts on “Out There: Big Night”