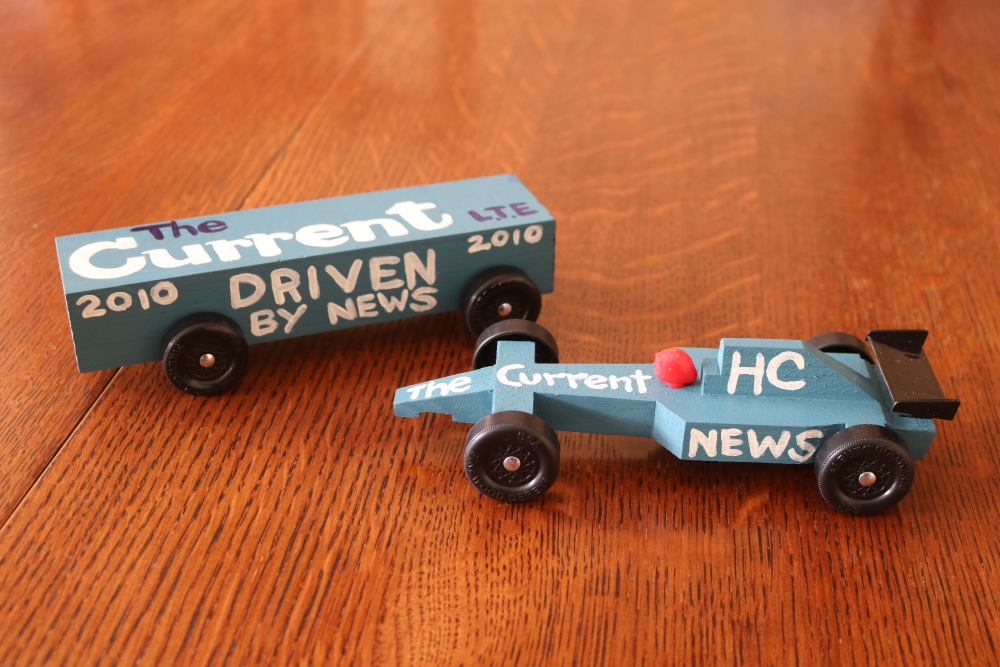 The Current's Formula LTE (Letter to the Editor) racers

Our high-speed moral dilemma was short-lived.

Someone questioned whether it was ethical for The Highlands Current, which planned to co-sponsor an unofficial Pinewood Derby for adults scheduled for Saturday (March 14), to enter two wooden cars in the low-stakes event. (The race, which was to benefit Philipstown Cub Scout Pack 317, was canceled at the last minute due to concerns about the coronavirus.)

A lawyer we found online responded immediately, pointing out that the name of the second annual event — the Outlaw Derby — almost mandated that rules be ignored. The event’s principal organizer, Quinn Chandler, was also being permitted to enter a car, which screamed conflict of interest. “What’s good for the organizer is good for a sponsor,” I said.

The Current approach to the event — which was to take place at St. Mary’s Parish Hall after the official Pinewood Derby was conducted for the Cub Scouts at Philipstown Recreation during daylight hours (also canceled) — was far superior to that of the other 30 or so teams whose cars would be trailing ours down the angled straightaway. They are an independent lot, bordering on aloof. We are a community newspaper, with an emphasis on community, and that’s where we turned to craft our vehicles. 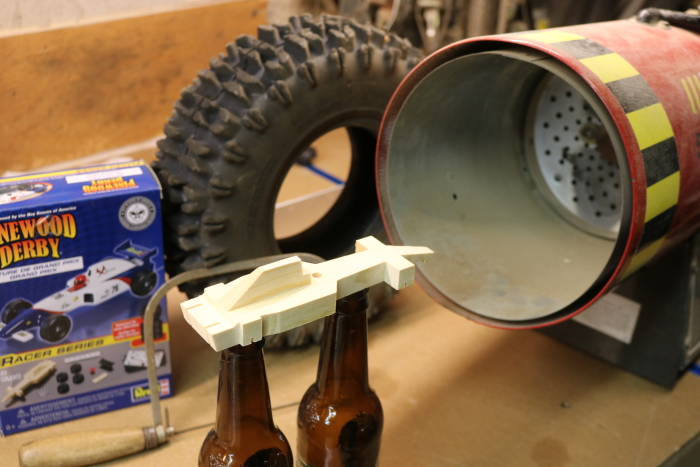 The development of The Current’s Formula LTE (Letter to the Editor) included extensive wind tunnel testing. (Photo by M. Turton)

Tim Brennan, a general contractor in Cold Spring, opened his shop for research, development and assembly. Tim is a veteran racer with a 1-1 record on the circuit. Years ago, his son Connor won in his Pinewood Derby debut. His son Chris finished dead last. Chris wasn’t asked to join The Current Racing Team.

Hours of aerodynamic testing in a wind tunnel produced startling results, showing that sleek isn’t all it appears to be. The pine block of our lead car, The Current LTE (Letter to the Editor) has been left untouched for maximum bulk.

Our second car, which was only slightly slower, was built in the classic Formula 1 style. Truth be told, it was the only kit left at AC Moore’s going-out-of-business sale.

Both cars had a distinct advantage: the paint. We consulted with Susan Early of C&E Paint Supply in Cold Spring, who mixed a latex in The Current’s signature color that she said would decrease wind resistance. By applying barely visible brush strokes diagonally by hand, she said we could channel the air in a downdraft, enabling the car to hug the track, gaining speed much quicker than cars using conventional spray paint. Plus, it was on sale. 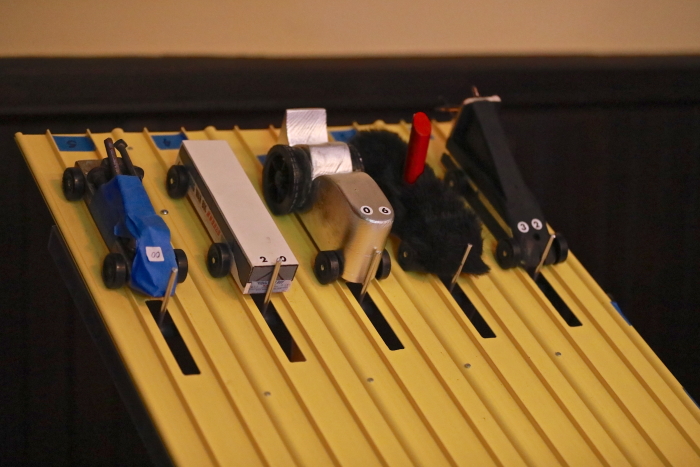 Our final element was swagger. Artist Cassandra Saulter’s bold exteriors burnished the cars in a way that will intimidate the opposition.

To prepare for the race, teams added as much weight to the car’s rear as possible without exceeding the 1-pound limit; polished axles and bent them to optimize performance; cleaned the tires; ensured that only one front wheel touched the track; applied graphite lubricant; made last-second improvements to aerodynamics; and pondered an entire rebuild.

This year’s derby would have again featured two classes: gravity cars and propulsion-assisted cars. Unconfirmed reports indicated one propulsion car would have featured a treadmill powered by a gerbil, unless it got kidnapped.

One thought on “Reporter’s Notebook: The Current Goes Outlaw”