As renovations on Town Hall progress, the Philipstown Town Board last week turned its attention to another infrastructure demand: A new, larger garage at the Highway Department, located on Fishkill Road in Nelsonville.

Supervisor Richard Shea announced the plans on March 5 during the board’s monthly meeting at the Recreation Center in Garrison.

He said early estimates put the cost at about $1.5 million. According to Shea and Town Board Member John Van Tassel, the structure would include office space, a conference room and an area to clean the trucks to prevent salt from washing into the ground.

Shea said he hoped the renovation of the 1867 Town Hall will be finished by late fall. He said the work so far has produced surprises. 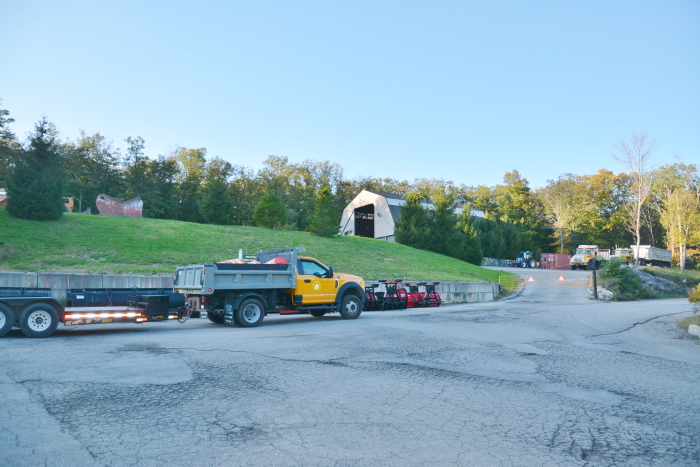 “With a building this old, you start taking it apart and find real damage,” he said. The frame turned out to be in good shape and the rehab revealed a long-hidden tin ceiling and 19th-century decorative elements in the upstairs meeting room, which will be accessible by elevator. The whole building will be “much more functional and more efficient,” he said.

He said a new garage and the Town Hall work will not require a tax increase.

The town also plans to spruce up the Continental Village park facilities before summer and establish rental policies for the clubhouse.

“The assertion that it’s a moneymaker for the town isn’t panning out,” Shea said. The use of the clubhouse is “a resident perk,” he said, although “it’s not some hall for renting out where you can do whatever you want. It’s in a residential area and we want to be respectful there. And we have insurance liabilities, so it can’t be a free-for-all” scene of noisy, disruptive conduct, as has sometimes occurred, he said. “So we’re going to set some guidelines and adhere to them.”

In other business, the board approved an arrangement to share equipment with Cortlandt, Buchanan, Croton-on-Hudson and Peekskill. New York State has been pushing local governments to cooperate and consolidate.