It’s a sure sign that spring, and with it the tourist season, are just around the corner when the trolley and sidewalk congestion come up at a meeting of the Cold Spring Village Board.

Eliza Starbuck, the president of the Cold Spring Chamber of Commerce, spoke to the board at its March 10 meeting about preparations for an increase in visitors.

Under the direction of Mayor Dave Merandy, village workers recently removed a bench outside the Hudson Hils Cafe & Market at 129-131 Main St. because it contributed to the congestion caused by customers waiting to be seated in the restaurant. She asked that it be returned.

“It’s a real problem,” said Deputy Mayor Marie Early in response. “People can’t get past it.”

Merandy described the location as “a bottleneck,” adding, “I have to fight my way through there almost every weekend.”

Bob Hayes, who co-owns the cafe with his wife, Hilary, said he takes phone numbers from customers who are waiting and encourages them to walk around the village until a table opens. “But they don’t listen,” he said. “They’re oblivious.”

“It’s really unfortunate that we are being singled out,” Hayes said.

“You are not being singled out,” Merandy responded, raising his voice.

The mayor said numerous merchants along Main Street continue to move merchandise and tables out past their stoops or the 3-foot limit allowed under the village code.

“Then we’re the bad guys when we say, ‘Can you move those back? ’ ” Merandy said. “There are a lot of people on weekends, and weekends are starting to turn into every day.”

He said the area will be monitored to see if eliminating the bench reduces congestion.

Starbuck reported that Putnam County has accepted the chamber’s suggested changes to the route of the Cold Spring Trolley, including switching to a single, two-hour looped route.

When she mentioned the War Memorial near the corner of Main and Chestnut streets would be a trolley stop, Early said, “I thought we said ‘no’ to that.” 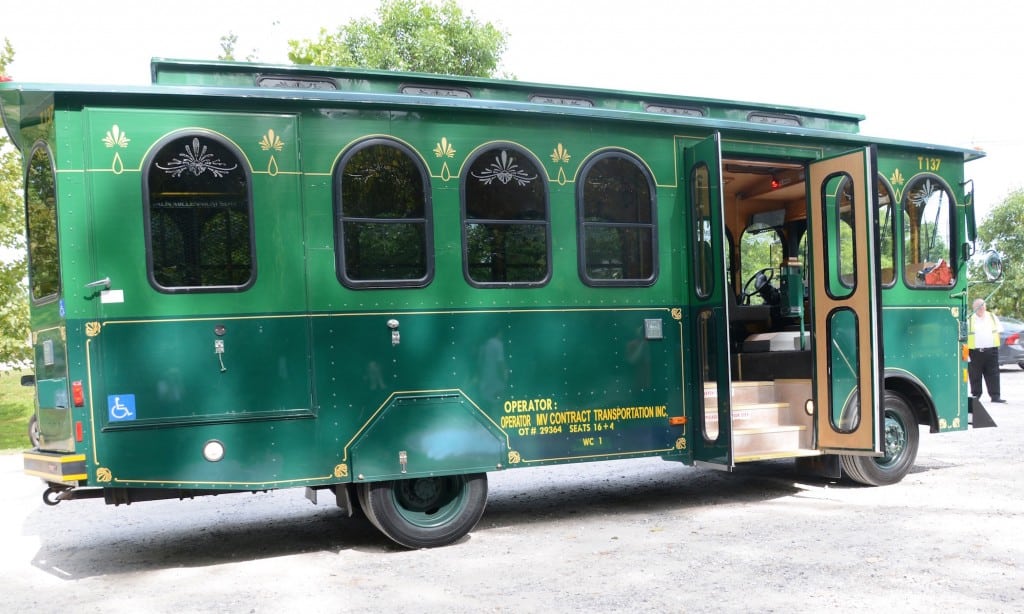 Starbuck said she would speak with county Transportation Director Vinny Tamagna to see if the stop could be removed. “We’re trying to find a stop near the top of the hill,” she said.

When Starbuck said the trolley will also stop in front of Butterfield Library, Early pointed out that the board had also objected to that location.

“You came to us and we said ‘no’ to those stops,” Early said. “Yet you took them to Putnam County and that’s what they’re planning on.”

Early said the width of the trolley creates safety problems along Main Street.

“A whole lot of progress has been made” with the trolley’s route and schedule, said Jack Goldstein, a member of the chamber board. “I don’t consider it a finished product at this point. We’re going to continue to massage this.”

Later in the meeting, Hayes expressed concern about the quality of village water.

When tap water has been “not palatable,” he said he purchased water to serve to customers. “On top of that, I’ve spent hundreds of dollars replacing filters for the building, ice maker, soda machines and coffee makers.” Individual filters cost up to $150, he said.

“Do I have any recourse,” such as compensation for filters?, he asked.

“I would say no,” Merandy replied, adding that if Hayes were compensated everyone in the village would be also entitled “at whatever millions that would cost.”

■ The Cold Spring Police Department answered 51 calls for service in February and made four arrests, including for criminal mischief, criminal possession of a controlled substance and unauthorized use of a vehicle. Officers also issued 61 summonses for moving violations, including 21 for speeding, and 32 parking tickets.

■ Trustees approved rehiring Nico Dellavalle as parking enforcement agent for the upcoming summer at a pay rate of $15 an hour. It will be his third summer on the job.

■ Planning Board Chair Matt Francisco said he expects to receive an application soon to change the use of the second floor of Building 1 at the Butterfield redevelopment from office/commercial to six senior housing rental units.

The Planning Board is also considering an application for a change of use at 20 The Boulevard, the former Campbell estate, from residential to residential/tourist home, with up to five rooms available for rent. Five rental rooms would require the facility to meet state laws governing hotels, he said.

Finally, the Planning Board is reviewing an updated site plan to address complaints about refuse and debris behind Foodtown Plaza.

■ Burke said former Cold Spring officer Bill Bujarski is making good progress reorganizing the evidence room, which ultimately will include disposal of evidence from cases dating back to the 1980s. Burke said the disposition of years’ worth of unclaimed lost and found items, including cash, must also be determined within state law guidelines.

■ The next flush of the village water system is scheduled for April 6 through 10.

■ The annual Nelsonville Fish and Fur Club’s Kids Fishing Derby will be held on May 3 from 8 a.m. to 4 p.m. at the village reservoir on Fishkill Road.

One thought on “Talking About Tourists”