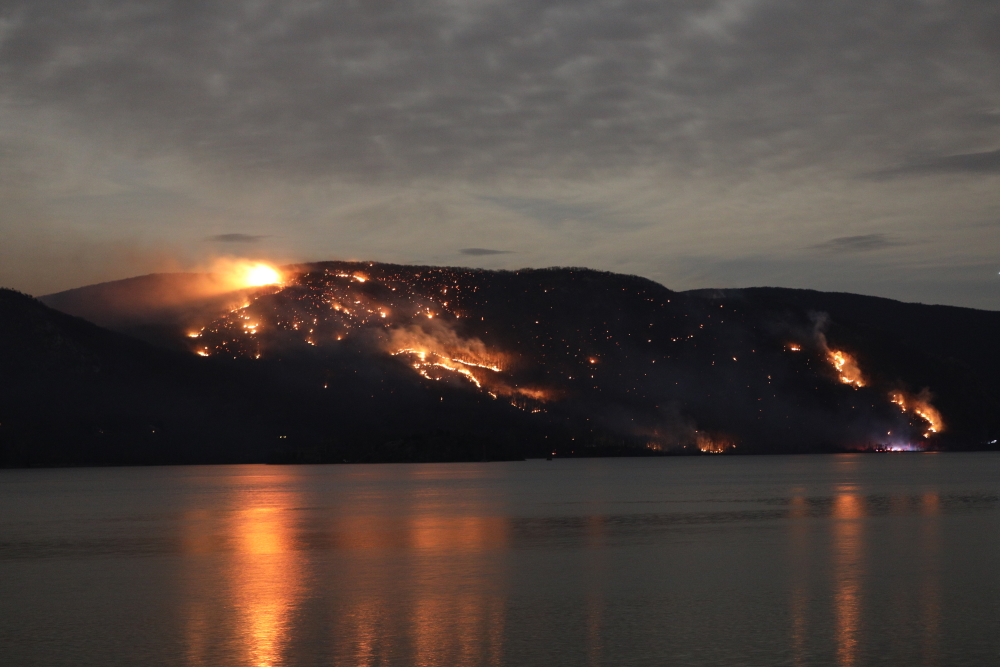 Breakneck Ridge at about 9:30 p.m. on Monday (Photo by Peter Bach)

A series of brush fires that began along the shoreline of the Hudson River near Breakneck Ridge on Monday afternoon (March 9) by nightfall had jumped over Route 9D and made their way up the mountain toward Lake Valhalla.

A New York State Police representative the next day said the fire had been contained after burning about 150 acres, although crews continued to work on isolated areas and to prevent flare-ups. There was no danger to any residences, he said. [On March 18, the state Department of Conservation said the fire had burned 277 acres and been difficult to contain because of the steep, rocky terrain.]

Route 9D between Cold Spring and Dutchess Junction was closed for hours as firefighters battled the flames, including with helicopters that dropped water taken from the river. At least one car parked in a lot along Route 9D was destroyed, and there also was a pileup involving multiple cars on the highway. There were no reported injuries to hikers. 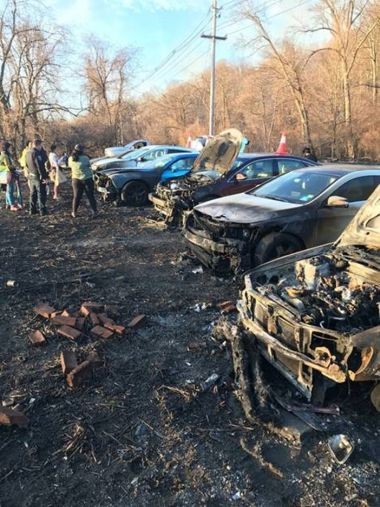 The Breakneck fire destroyed a number of cars. (DEC)

The origin of the fires remains under investigation, state police said. In a statement, a representative for the MTA said “it appears a Metro-North diesel work train locomotive at the brush fire location between Cold Spring and Beacon experienced some type of malfunction at the beginning of the incident. Railroad investigators at the scene will determine the nature of any link.”

Hiking trails on and near Breakneck remain closed. [Update: They re-opened on March 14.]

In Cold Spring, officials said that because firefighters were pulling water from the village’s distribution system to fill tankers, residents might see discoloration and loss of pressure.

Brad Fredricks of Cold Spring said he was on Sugarloaf, a mountain north of Breakneck, on Monday afternoon when he noticed the fires break out along the shoreline. He said it appeared that “a train went by and started four or five fires.” Video he shot from atop the mountain and after he returned to Route 9D can be viewed below.

Diane Lapis, the president of the Beacon Historical Society, whose home office faces Route 9D, said she watched firefighters and police officers all afternoon directing traffic away from Cold Spring via a turnaround in her driveway near the Dutchess Junction firehouse.

“While I couldn’t hear the interactions, I could see how travelers were disrespectful to the officers’ directions to turn around and go back to Beacon,” she wrote in an email. “Repeated directions using arm signals to turn and go back were the norm. Speedy turns in the driveway seemed passive-aggressive toward the emergency services personnel as if protecting the public was a personal affront to their all-important life.”

Erin Fedigan of Poughkeepsie wrote that she was driving from Cold Spring toward Beacon on 9D at about 10:30 p.m. on Monday after visiting her brother near Bear Mountain and was surprised to find the road again open.

“Once I went through the tunnel, you could see many people parked under the flaming wall of the mountain, taking photos, with ash flying through the air,” she wrote. “I did not stop to take pictures; the smoke filled the road enough to make me turn around to take Route 301 to Route 9 home.”

Connie Hogarth, who lives near Breakneck, wrote in an email: “Fire got right up to my lawn as I watched from behind glass doors. It might have enveloped my  home were it not for the magnificent firefighters. It was very unsettling, at least, and downright frightening when it was in the garden and close to the propane tank.”

In September, a smoky blaze atop Sugarloaf burned at least 50 acres.

The annual spring ban on burning residential brush to prevent wildfires begins on Monday, March 16, and continues through May 14. The state Department of Environmental Conservation said the ban, which began in 2009, has reduced spring wildfires by 43 percent, although about 1,500 still occur. To report burning violations, call 800-847-7332.