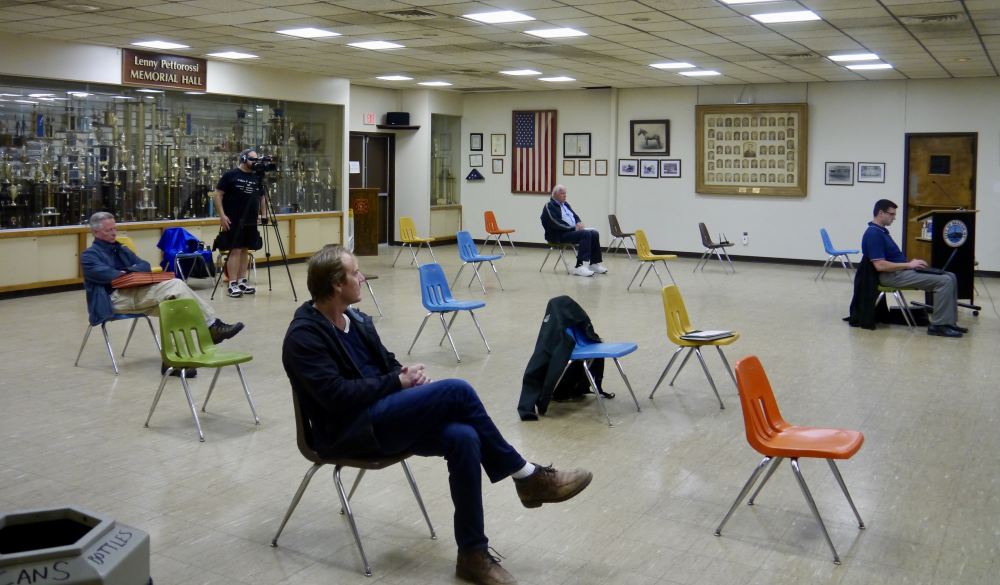 With a few exceptions, I have covered every Beacon City Council meeting since the fall of 2015.

Most have been newsworthy; a few have been entertaining. But none have been like this week’s.

While civics in much of the Highlands grounded to a halt after last week’s mass cancellation of public events and social distancing guidelines were imposed by the governor, the City of Beacon remained open for business.

It was announced on Friday (March 13) that Monday’s council meeting would be held not at City Hall but across Route 9D in the basement of the Lewis Tompkins fire station, which has capacity for up to 200 people.

I ran into Mayor Lee Kyriacou on Main Street on Saturday (no handshakes; we bumped elbows) and he said he felt it important for the city government to stay open. Closing up shop would be giving in to the hysteria, he said, but, at the same time, city officials would use common sense.

There was little of consequence on the Monday agenda, but I wanted to see how this would work. As the 7 p.m. hour approached, however, I admit I’d begun to feel apprehensive.

As I walked the half-mile from my house to the fire station, a few scenarios ran through my head.

Should I wear gloves to open the door? Should I pull my scarf all the way over my face? Does that look weird? Will I be able to find a seat with 6 feet of open space on every side? What if I can’t — do I stand?

When I arrived, the smell of bleach almost knocked me over. This place had been cleaned. 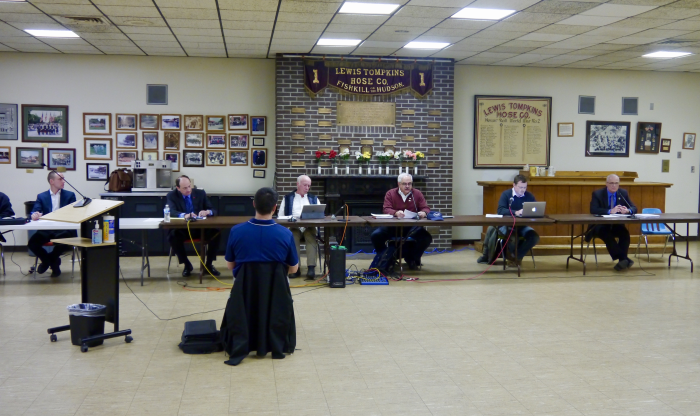 The mayor, council members and staff spread out at Monday’s meeting.(Photo by J. Simms)

There were about 15 plastic chairs that someone must have lifted from a middle-school classroom strategically placed around the room and a long row of tables for the council members and city staff that nearly stretched the entire width of the hall.

The meeting began at 7:04 p.m. Including the mayor, there were six council and staff members in attendance. Four members called in. There were seven people in the audience, including myself and Pete Skorewicz, who films meetings, parades and everything in between for the city. Pete’s a pro; it seemed like just another day at the office for him.

Kyriacou began the meeting with a series of COVID-19 announcements: City buildings are being cleaned twice daily. All business in City Hall, whether you want to reach the mayor, the Building Department or the city clerk, will be conducted through the window where you pay your water bills. If you see establishments violating the 20-person-to-a-group rule, call the police.

He then moved on to public comment and two public hearings. Theresa Kraft — far and away the city’s most prolific public-commenter — called in and made four comments during the segments. Truthfully, I think the familiarity of her voice put us regulars more at ease.

From there I expected the council members to breeze through the rest of the agenda, but they proved me wrong. One by one, city staff and council members spoke about programs like Mutual Aid of Beacon, a grassroots citizen group that’s sprung up in the wake of COVID-19, or the need for state and federal representatives to advocate economic stimulus for the small business owners and other citizens affected by this topsy-turvy situation. Or simply a reminder to take care of your neighbor.

“Beacon, this is where you shine,” said Council Member Dan Aymar-Blair.

The council did move quickly through the administrative portion of the agenda, setting a slew of public hearings for next month and authorizing the use of nearly $10 million in bond funding to make improvements to City Hall, as well as Beacon’s sewer lines, water treatment plant, and water supply treatment and distribution system. We may be looking at increases on our water bills to pay for those expensive but necessary upgrades, but it’s too early to say for sure, City Administrator Anthony Ruggiero told me later in the week.

The meeting adjourned at 8:29 p.m., and no one hung around for longer than they had to.

As I walked home, a cool breeze helped lift away the scent of bleach. There’s rarely much going on along Main Street at 9 p.m. on a Monday, but this time it felt even more quiet than usual.