Elijah Hughes, a Beacon resident who is a junior at Syracuse University, announced last week on Instagram that he intends to enter the upcoming NBA draft.

Hughes attended Beacon High School for his freshman and sophomore years before transferring to Kennedy Catholic for his junior year and South Kent Prep in Connecticut for his senior year.

Hughes, 22, has a year of eligibility remaining at Syracuse after being red-shirted for a season following his transfer from East Carolina University.

“I just felt like the time was right,” Hughes said this week. “I had a good season, and everything just felt good.” He said he received counsel from his parents, Coach Jim Boeheim, the assistant coaches and “a tightknit group” of friends. “They’re all very supportive, and they make it all easier for me.”

Under rules adopted by the NCAA in 2018, Hughes will get feedback from the Undergraduate Advisory Committee, which polls NBA executives to provide underclassmen who declare for the draft with feedback on where they will probably be selected — or not selected — among the 60 players chosen over two rounds. Hughes also can hire an agent but must sever ties if he returns to school. 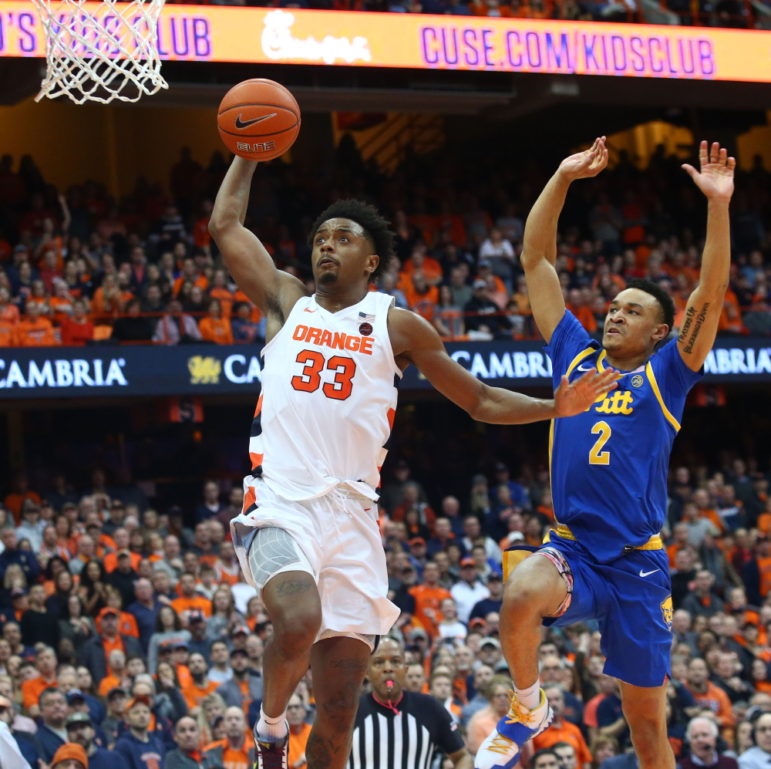 Elijah Hughes rises for a dunk during a game in January against the University of Pittsburgh. (Syracuse Athletics)

Hughes appeared on the radar of NBA scouts after a standout season during which he led the Atlantic Coast Conference (ACC) in scoring at 19 points per game. He was named to the first team of the all-conference team.

The Sporting News ranks Hughes, a shooting guard who is 6-foot-6 and weighs 215 pounds, as the draft’s 50th best prospect, and ESPN has him at No. 57. Each ranking would have him being selected late in the second round.

Hughes took on a leadership role this season for the Orange, who finished 18-14. “I took on more of a scoring load,” he said. “I really feel like I’ve seen improvement. The way I’ve been putting the ball on the floor opened up my game — the way I shoot and get in the lane.”

Like most players, Hughes said playing in the NBA was a childhood dream. “I always wanted to be one of the best and play against the best,” he said. “It’s exciting, but I am nervous with all that’s going on with this pandemic.”

While home with his family in Beacon, Hughes said he’s trying to stay in shape and catching up on his movies and entertainment.

“I’ve been getting a lot of rest,” he said. “I played a lot of minutes this season, so I’m getting back in tune, doing some running. I’m not big on video games, so I’m watching Netflix.”

While Hughes said he feels ready to play as a pro, he also is prepared to return to Syracuse, which could raise his stock for the 2021 draft. “I want to keep my options open, and listen to people I trust, like Coach Boeheim,” he said. “I can only control the things that I can control.”