Concerned about visitors amid pandemic

With the U.S. epicenter of the coronavirus pandemic located 50 miles south in New York City, Cold Spring Mayor Dave Merandy wants local short-term rentals, such as those listed on Airbnb, shut down.

“The advertising is there — you can go online and see everybody who’s renting,” Merandy said at the Tuesday (March 24) meeting of the Village Board. “Under these circumstances I’m not comfortable having families move in from New York City or wherever.”

“We need to protect the people who live here,” said Trustee Lynn Miller. She suggested the board write Gov. Andrew Cuomo asking him to shut down short-term rentals. She noted that Airbnbs and hotels are not included on the list of “essential” businesses allowed to remain open during the shutdown designed to slow the spread of the virus. 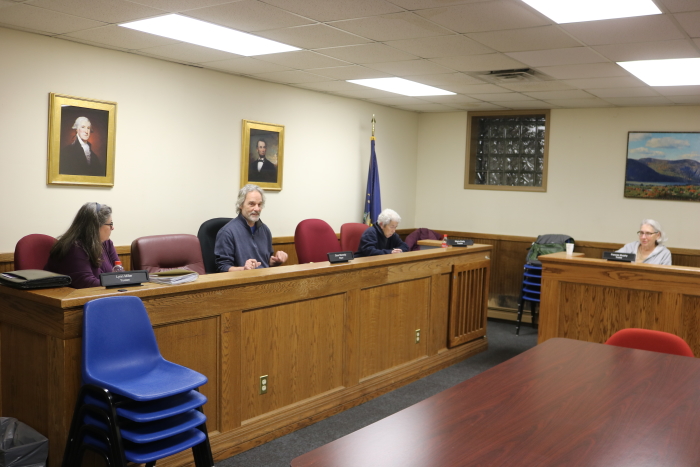 Members of the Cold Spring Village Board practiced social distancing at their March 24 meeting. (Photo by M. Turton)

Short-term rentals are illegal in village residential areas zoned R-1, except on state Routes 9D and 301. However, homeowners in R-1 can apply for a special-use permit enabling them to rent rooms as a “tourist home.” (Under state law, an establishment offering five or more guest rooms is considered a hotel.)

The local law has never been enforced and in recent years short-term rentals have proliferated. At a packed public meeting in September, residents expressed support for increased regulation of the rentals.

At Tuesday’s meeting, Merandy said he wanted to “put it out there to ask people to stop renting. It’s against the law and we will do our best to enforce it.”

The mayor said he believes the village could ban short-term rentals and hotels if he were to declare a state of emergency.

When asked by Deputy Mayor Marie Early if he felt there were health risks associated with the rental of a home, Merandy responded empathically.

Someone renting an entire house “is more than likely coming up from the epicenter [New York City]. Where are they going to shop for provisions? They’re going to go over to Foodtown. And that’s where the health issue comes in. That’s what I’m worried about,” he said.

Early pointed out that short-term renters outside Cold Spring can also come into the village for groceries.

Merandy said that, recently, multiple families have moved in and out of rental properties adjacent to his home. “That has to increase the risk,” he said.

The issue goes beyond the rental of entire houses, Miller said. “It’s also people renting apartments in their homes. One person I know is on quarantine but renting out their Airbnb in the bottom of their home.”

The risk that short-term rentals will aid in spreading the virus also needs to be considered, Miller said. “We need people to stop moving so the curve is flattened” and the health care system is not overrun with critical cases.

■ The board tentatively agreed to the sale of a village-owned property at the corner of Moffatt and Healy roads for $21,500. The 0.97-acre property is on the boundary of Nelsonville and Philipstown. Early said the property was purchased by Cold Spring years ago to provide Catskill Aqueduct access, which is no longer needed from that location.

■ Trustees approved a two-year renewal agreement with Comp Alliance for workers’ compensation insurance for village employees at a cost of $118,590.

■ A public hearing for the proposed 2020-21 budget is scheduled for April 7 but will be closed to the public. The tentative budget is posted on the village website at coldspringny.gov and the hearing will be videotaped and remain open until April 10, allowing residents to submit comments by mail or email. Residents without internet access should call the village clerk at 845-265-3611 for a copy of the budget.