So, can you hike in the Highlands or not?

That depends on who you ask.

On Tuesday (March 24), the Putnam County Sheriff’s Department posted on social media that, as per a newly enacted state of emergency by Philipstown Supervisor Richard Shea, you could not.

“TRAILS CLOSED,” the message began, asserting that, with the approval of the state Department of Health, Philipstown was “closing all trailheads along the Route 9D corridor.” Cones and caution tape were put up, and locals applauded the measure, which they saw as an antidote to the enormous crowds that have descended on the Highlands, especially Breakneck Ridge, in the wake of a COVID-19 crisis that has left outdoor recreation as one of the few activities allowed.

But, according to the state parks department, its trails aren’t closed, including Breakneck, whose trailhead lies just over the county line in Dutchess County, outside the purview of Philipstown by a few hundred feet.

By Wednesday afternoon, the state Department of Transportation had removed the caution tape and cones, saying it first had to complete a safety review, and the parking lots were reopened, although Metro-North placed concrete barriers to close its lot near the Breakneck stop.

Evan Thompson, the manager of the Hudson Highlands State Park Preserve, said he wasn’t sure if Philipstown’s order was enforceable on state property. (Shea on March 27 extended the ban on parking or congregating at roadside parking lots at trailheads on Route 9D through April 6 and banned parking on East Mountain Road, Indian Brook Road and Fishkill Road effective April 2.) 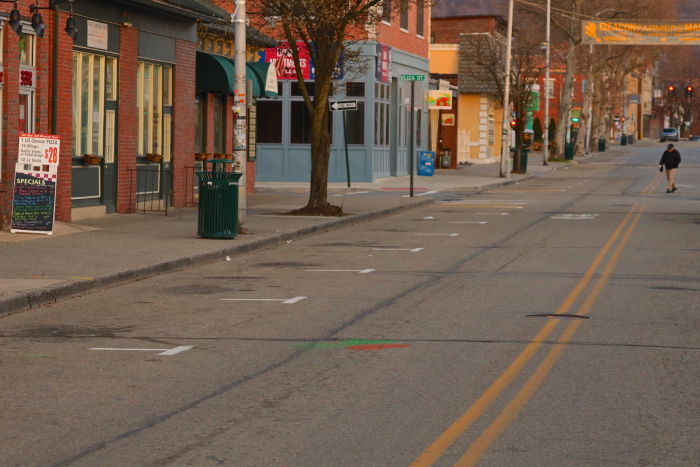 Even in the best of times, the patchwork of state agencies, municipalities, nonprofits and other stakeholders involved in outdoor management complicates matters. Add in a pandemic and the issue becomes nearly impossible, and the result has been conflicting messages about whether people should use the trails or stay home.

Just last week, it was simpler. Gov. Andrew Cuomo said that the state’s parks would remain open and encouraged responsible outdoor activity. The state parks department issued a series of guidelines, including to only hike with people you’re already in isolation with, avoid crowded or popular trails, and stay home if you’re feeling ill.

The state Department of Environmental Conservation announced that it was still stocking streams for trout season, which opens April 1, and advised bird watchers to stay 6 feet away from each other. Putnam County encouraged residents “to enjoy our parks and conservation areas,” although it closed Veterans Memorial Park in Kent and Tilly Foster Farm in Brewster.

At the same time, the nonprofit New York-New Jersey Trail Conference on March 17 began promoting a series of “less-traveled trails” in an effort to encourage hikers to avoid popular paths. In the Highlands, it promoted the Catfish Loop in southern Fahnestock as a suitable, spacious hike.

The advice went unheeded. Last Sunday afternoon, only two cars were parked at the Catfish Loop trailhead — one of which belonged to this reporter — and the trail itself was desolate. Meanwhile, Breakneck, Mount Taurus, Mount Beacon and the Hubbard Lodge were mobbed. 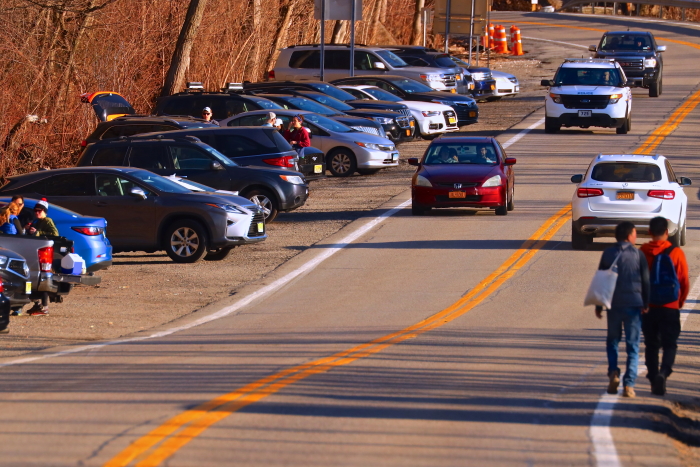 … a few miles down the road Breakneck Ridge was as busy as ever over the weekend. Some local officials are calling for the state to close its trails. (Photos by Ross Corsair)

Hank Osborn, the director of programs for the Trail Conference, said that over the past week, the number of its maps downloaded online had increased 60 percent. He said he found that worrisome, because people who don’t already have maps tend to be inexperienced hikers. In addition, the Trail Conference’s trail stewards program, in which employees stationed at busy trailheads discourage novice hikers and steer people toward less-traveled trails, doesn’t begin until May.

In the past week, both the Trail Conference and the Appalachian Trail Conservancy suddenly reversed course and began urging people to stay home. On March 23, the Trails Conference updated its Trail Less Traveled post with this note: “Staying home is the safest option during this time.Get some fresh air in your backyard, start seeds or another gardening project, or take a walk around the block. But please, stick close to home.”

“A continued influx of visitors at this critical time presents a grave public health concern to our small towns and our surrounding communities,” she said. “New York City is the epicenter of this crisis in the U.S. A third of all COVID-19 cases in the U.S. are an hour south of us.”

Many Catskills counties and towns have issued similar decrees in the past week, urging those from New York City specifically to stay away.

Breakneck Ridge remains a chief source of concern because it is one of the riskiest, popular and populous hikes in the country, as well as a constant source of aggravation for residents who grumble about the mass of people who congregate at the trailhead, presumed to be from New York City. But a 2018 survey by the Trail Conference showed that while city dwellers do climb the ridge, the overwhelming majority of hikers are from the immediate area.

While state trails remain open, given the conflicting guidance about whether people should hike them, we will hold off for the time being on our next recommendation for where residents can engage in social-distancing in nature.

In the meantime, the state parks department has information about trails at Fahnestock and Hudson Highlands state parks at parks.ny.gov, as well as maps and advice, and the New York-New Jersey Trail Conference offers a “find a hike” feature at nynjtc.org that allows you to filter for difficulty, features and whether dogs are allowed. Dutchess County also has an online trail guide.

With another weekend of good weather on tap, and after a confusing week for officials and the public, plans are slowly coming into alignment. As of press time, Scenic Hudson was in talks with Beacon city officials about how to keep the parking lot at Mount Beacon open while limiting access to prevent crowds.

“Our parks are open,” said Rita Shaheen, the director of parks and community engagement for Scenic Hudson, who also manages Beacon’s Long Dock Park and Madam Brett Park. “Our plan is to keep them open but monitor them carefully. We’re taking this very seriously.”

However, by Friday afternoon, Scenic Hudson has closed the lot and the trailhead on  Howland Avenue. “Scenic Hudson and the City of Beacon have determined that the level of public use at this location is making it impossible for people to comply with CDC guidelines for preventing the spread of coronavirus,” the group said in a statement. “We are working with the City to erect barricades blocking the park entrances. Please respect this closure and do not attempt to access the park on foot or by parking along the road.” 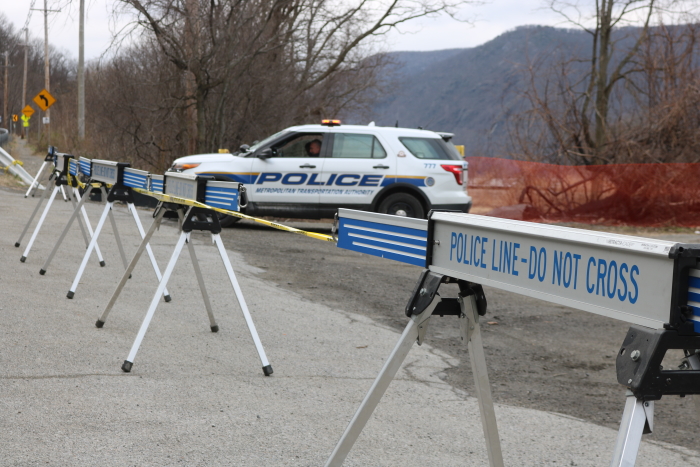 These temporary barriers erected by the MTA to close its parking lot at Breakneck were replaced on Thursday (March 26) by concrete ones. (Photo by Michael Turton)

Also this week, Supervisor Shea in Philipstown said he planned to meet with Evan Thompson from the states park department to come up with what Shea referred to as “more creative” ways to limit parking.

Shea stressed that, for now at least, the trails were open. But he said a lot more common sense and distance is needed from everyone.

“We encourage people to get outside, especially our residents,” said Shea. “They have a right to do these things. We support these trails. In times like these it’s extremely important for your mental health and your physical health to get outside and get moving. But people are finding that they’re unable to do that because of the level of crowding on the trails, and it’s discouraging our residents from getting out there.”

On Saturday (March 28) the state DEC and park system jointly announced efforts “to reduce public density at state parks,” asking residents to engage in “responsible recreation,” to “stay local and keep visits short” and to “not park on roadsides. Only park in designated areas.” 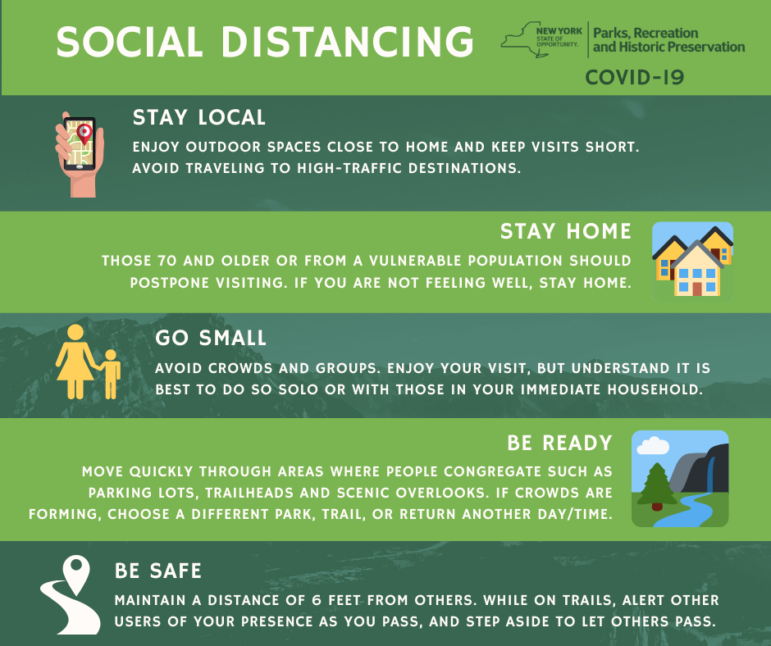 Advice for hikers from the state parks department