Putnam County’s handling of the coronavirus crisis has sparked friction between its sole Democratic legislator and the Republican-controlled county government, with accusations on one side of “reckless” withholding of information and allegations of erroneous “facts” on the other.

The clash involves concerns raised by Legislator Nancy Montgomery, whose district includes Philipstown and part of Putnam Valley, and responses from Legislator Toni Addonizio, who represents Kent and chairs the nine-member Legislature.

County Executive MaryEllen Odell also weighed in to defend the county’s performance, including “heroic work” by the Health Department.

Over the last month, in memos, emails and other messages, Montgomery has urged a stronger county response to the COVID-19 threat. Additionally, she advocates telecasting legislative meetings to “get our proceedings before the public faster” while social-distancing restrictions prevent public access. To expedite implementation of a virtual option, she offered to bring lighting and microphones.

Her communications highlight her frustrations after the Legislature canceled a March 19 meeting of its Health Committee and as legislators considered a policy allowing them to convene from remote locations, with no audience.

Legislators were scheduled to vote on the policy on Thursday (March 26). The draft policy, written on March 15, promised to provide meeting coverage whenever feasible via an audio feed or a telecast, but on March 20, Addonizio announced that the county intends to make only an audio feed available.

Montgomery greeted that news with the hope, expressed in an email to fellow legislators, that “we can soon find a better solution than audiocasting.” She pointed out that other counties use Facebook Live, Zoom, YouTube Live and similar systems to offer real-time coverage.

Similarly, in a separate memo to Odell, Addonizio and others, Montgomery recalled that in January she recommended that Putnam “make advance preparations,” including plans for utilizing technology for meetings, to “be ahead of this crisis.”

She has also advocated that the Health Committee promptly address other matters, such as:

■ Re-instatement of the county’s part-time epidemiologist’s job, which was cut from the 2020 county budget. Montgomery stated that the employee who served as epidemiologist now is simultaneously a public information officer, public education supervisor and epidemiology overseer.

■ Clarification of whether Putnam has a drive-thru COVID-19 testing site. The county Facebook page mentions a drive-thru testing option, but provides no details, Montgomery said.

■ A streamlined process for applying for food stamps, whose importance is expected to increase with businesses shut and paychecks lost to the pandemic.

At present, it takes applicants two to three weeks to obtain food stamps, but “families can’t wait,” Montgomery wrote on March 18. She also noted that only two county employees handle the paperwork and that applicants must either mail completed forms, drive them over to county offices, or fax them, although fax machines scarcely exist anymore.

(Expansion of the food stamp program as more Americans suffer economic hardship became a major sticking point this week in Washington in negotiations over a $2 trillion relief and stimulus package.) 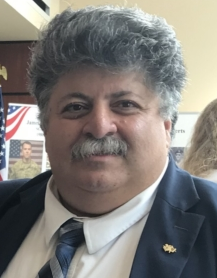 Addonizio rejected suggestions of county foot-dragging and a briefing by Nesheiwat. “Your facts and therefore your claim that action has been untimely are incorrect,” she wrote to Montgomery on March 19. Moreover, she continued, “considering how busy the Health Department is in fighting the COVID-19 outbreak, it is simply unnecessary and counterproductive to require the health commissioner to appear before the Health Committee at this time.”

Emailing fellow legislators, Montgomery then protested that “it is unconscionable that anyone would deem the participation of the health commissioner during a public health emergency to be ‘unnecessary and counterproductive.’ ”

She also told constituents in an open letter that notwithstanding her ongoing conversations with officials from the federal to the village level, and despite the willingness of neighboring county executives to discuss the situation “in detail, with transparency,” she has been “systematically excluded from communications” from Odell and Nesheiwat and, “despite multiple requests,” has been denied inclusion in telephone briefings.

“This is frustrating and worrisome,” said Montgomery, who has publicly expressed her disappointment that she was not appointed to the Health Committee. “Their lack of information-sharing is reckless. It undermines public trust and creates social and political turmoil. We must govern together, or we all fail.”

Reacting to Montgomery’s criticism, Odell said on Wednesday (March 25) that the Health Department, “which is doing heroic work as the lead agency during this crisis, is casting a wide net,” with outreach to federal and state officials, businesses and states less affected by COVID-19, “to secure Personal Protective Equipment and supplies for our first responders and for health care workers.”

Odell said Nesheiwat conducts daily phone briefings with county department heads and Addonizio and Legislator Amy Sayegh of Mahopac Falls, who chairs the Health Committee, and that participants are charged with passing the information down their chains of command. Likewise, the Health Department disseminates a morning email and Addonizio sends an end-of-day briefing and “all legislators are on these mailing lists,” Odell said.

Montgomery agreed on Wednesday that the county provides email summaries, which, she said, essentially repeat COVID-19 updates on the county website. Nonetheless, she added, “there’s no coming together as a legislative body to discuss the coronavirus crisis.”

2 thoughts on “Montgomery Clashes With Putnam Over COVID-19 Response”