Nell and Ted Timmer watched with trepidation in January and February as the coronavirus spread through parts of China and Europe.

The Garrison couple had been planning since last summer to take their five children, ages 5 to 14, for three weeks to the Patagonia region of Chile and Argentina. They had attended a wedding in England as a family in 2015, but this would the first big trip with children who were all potty-trained, eating regular food and carrying their own backpacks. 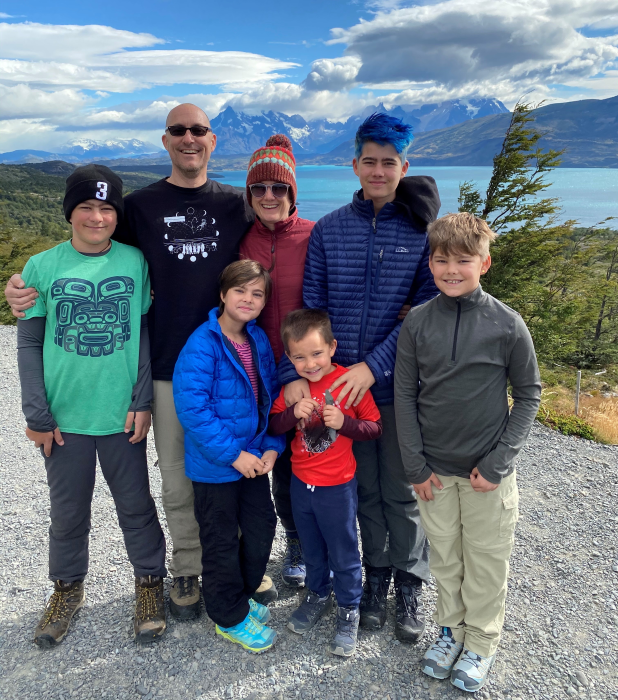 “As the beginning of March rolled around, I was patting myself on the back for picking the one place on earth that coronavirus hadn’t hit,” recalled Nell Timmer, who is a nurse in the pediatric intensive care unit at Westchester Medical Center.

When the family boarded the plane at JFK to South America on March 10, the Centers for Disease Control and Prevention had only issued a Level 2 warning for Chile [“practice enhanced precautions”].

Two weeks later, on Monday (March 23), that suddenly changed. The virus was moving quickly, and the CDC upgraded its assessment to a red alert: “avoid all non-essential travel.” There are more than 920 confirmed cases in Chile; last week, its president announced a “state of catastrophe” that allowed him to deploy the military, close the borders and enforce a 10 p.m. curfew.

The Timmers, and many others, didn’t see that happening so quickly. After arriving in Santiago, “we had a week of nice, relaxing vacation” before flying to Punta Arenas, Chile, said Nell. “However, when we went to pick up our rental van to drive across the border, we were told that Argentina had instituted a 14-day quarantine for foreigners entering the country.”

The family gave up on the Argentine portion of their trip and instead drove three hours south, to an Airbnb in Puerto Natales, near Torres del Paine National Park. 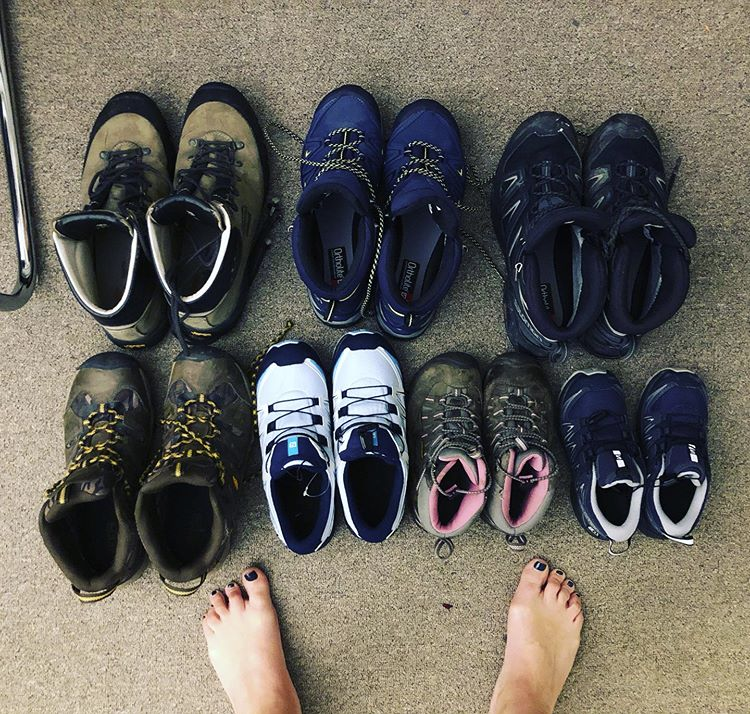 “We did some amazing hiking,” Timmer said. “Then each night we got on the Wi-Fi to check on the day’s developments. By the end of Day Two, it wasn’t looking good, and many services in Chile, including the national park and restaurants, were shutting down.” In fact, it went dark so quickly, Timmer said, they weren’t able to return their rental car.

“We realized we might not get out — nor maybe did we want to,” she said. “The schools were canceled at home, traveling meant passing through busy New York airports, and for me, it was going back to work without adequate protection.”

Realizing they might be in Puerto Natales longer than expected, and needing to stretch their budget, “we spent a few hours on a street corner using the Wi-Fi from a cafe searching for another [less expensive] Airbnb that had room for seven people. We rented it for three weeks — or perhaps a few months, as the [U.S.] State Department was saying, if we don’t come home now, don’t plan to come home for a while.

“That’s the story of how our vacation became a staycation.” 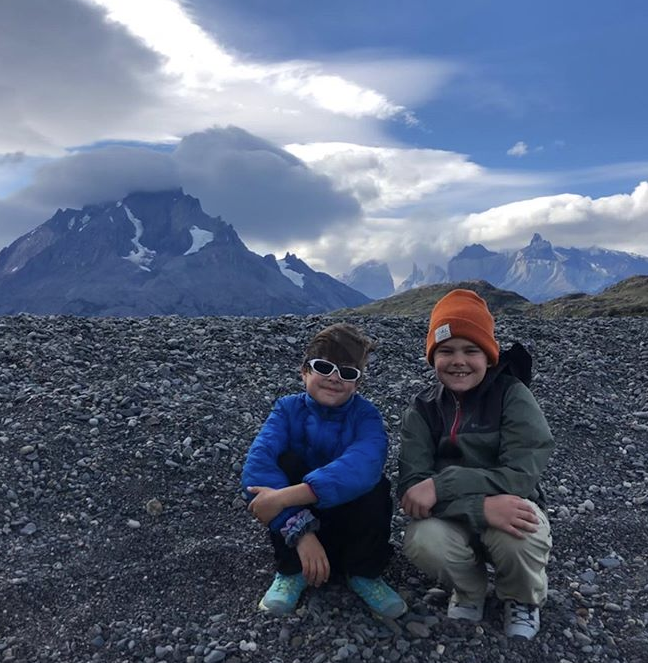 Timmer said the family has appreciated the long-distance support from friends in Philipstown with South American connections, including Robert Choi and Ralph Moran in Garrison and Francisca Salas from the Manitou School in Philipstown, whose brother lives in Puerto Natales.

“We are all finding new routines, with kids checking into their Google Classrooms [for remote learning], parents finding their way to new grocery stores and other essential resources, and everyone happy to be together, healthy, under a nice roof with food to eat,” she said.

“The kids are doing great,” she added in an email on Wednesday (March 25). “I am proud of them. They have adapted to life abroad (except for the fact that Jasper was dying without a basketball — we found one today), have been curious and open to new experiences. The part they struggle with most is probably the same thing as us — the unpredictability of what comes next. We are having regular conversations to update them on plans. Having assignments from teachers has helped us have a little bit of structure in our days, which I appreciate.” 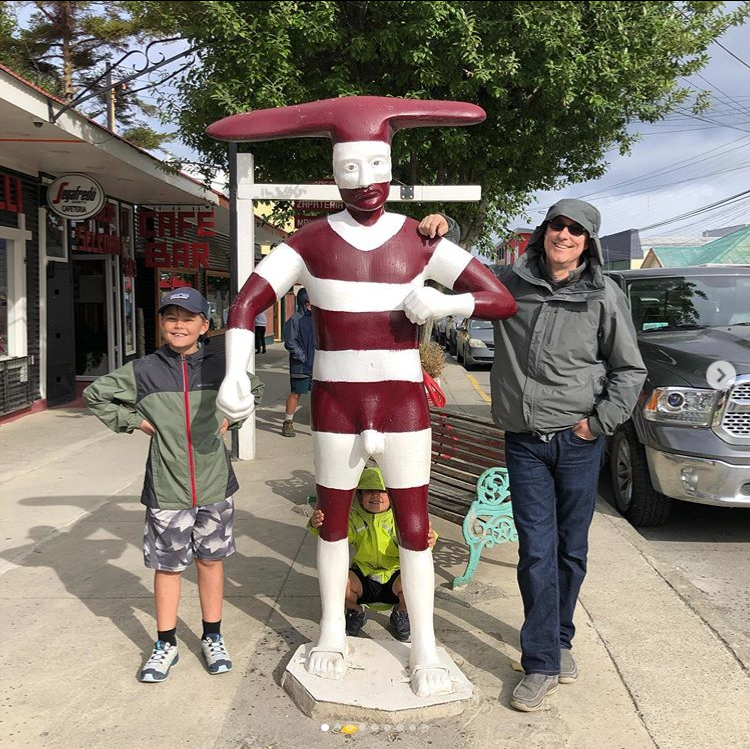 Emmett, Graham and Ted Timmer in outside a restaurant in Puerto Natales. The figure is a representation of the indigenous people of Patagonia, the Kaweskar. (Photo provided)

The five Timmer children and teens — Graham, Mira, Emmett, Jasper and Henry — attend three schools: Garrison, Manitou and Masters. “Thankfully, all the teachers have been very supportive and understanding, saying things like ‘They will learn way more on this trip than I can teach them in three weeks in school,’ ” their mother said. They are studying Spanish, she said, “but there aren’t many people to talk to. Everybody is in their homes.”

The family was scheduled to return to JFK on April 2 but their flight has been canceled. “At this point, we feel the risk of encountering COVID-19 while traveling is too great to outweigh the benefits of being home,” Timmer wrote on March 25. Because many airlines are now canceling flights, “we don’t want to give up the safety of where we are to sit in an airport for days.”

3 thoughts on “Stuck in Patagonia”