By kids, for kids, and growing rapidly

It’s not that Lucas Simms was bored. The opposite was true, actually.

“Everybody I’ve talked to this week loves it, being at home,” he reports.

Still, being confined has been frustrating — particularly the lack of access to his friends at the Hudson Hills Academy in Beacon — for the 8-year-old.

But he has found diversions. There are “porch visits” with friends. And there’s the weekly newspaper he launched.

The Beacon Kids Times, which is published on Thursdays and distributed free by email, is attracting correspondents and readers from all over the city. It more than delivers on its promise of “reviews, art, outdoors, more.” 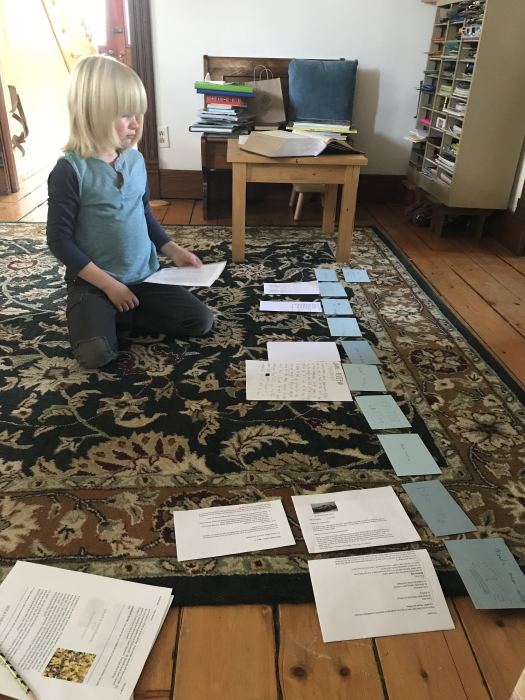 Although his favorite subject is math (and his favorite ice cream flavor, cookie dough), Lucas surely took inspiration for the Times from his dad, Jeff Simms, a reporter for The Current, although he says his mother, Heidi Kitlas, who works with the paper on fundraising, deserves “25 percent credit” for the idea. For some reason, the couple did not dissuade their son from creating competition for The Current in Beacon, especially for the younger demographic.

Inside the Times are contributions from reporters such as Fiona, who assesses “What’s Happening? The Amazing Outdoors,” and Daley, who provides tips on what to wear and what to do, based on the forecast. Reviewers, with opinions to spare, include Hazel, a comic book expert, who gives the thumbs-up to Scooby Doo, Where Are You? #102, noting: “What I liked about the story is that it is funny and silly and there’s a twist because you might think it is one person but it might be the other. I like all of it. I don’t have a part that I don’t like.”

Silas, a video game expert, explains Mope.io: “The levels of that are Pterodactyl, which is a desert animal, Kraken and King Crab, which are water animals, T-Rex and Dragon, are grass animals, Yeti, which is an arctic animal and Phoenix, which is a lava animal.” 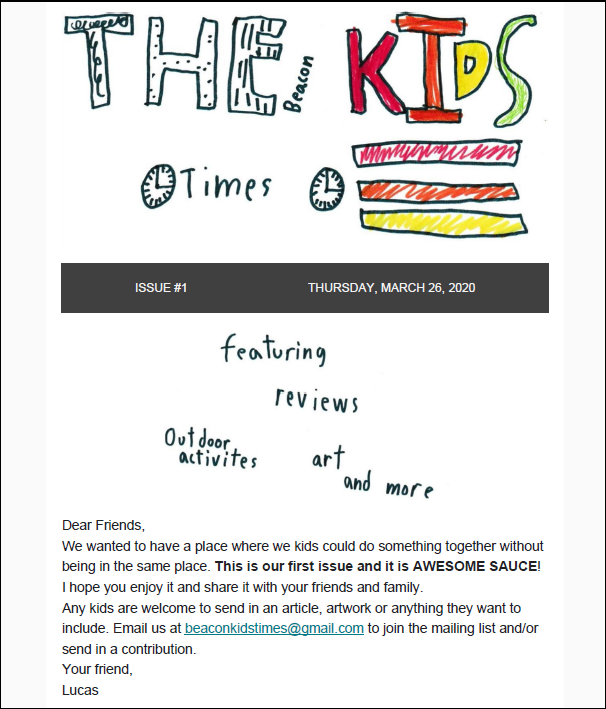 The first issue of the Beacon Kids Times. (Click to read.)

The centerpiece drawing, by Macon, is titled, “One of My Favorite Things to Do Right Now is Build Legos with Dad.”

In the March 26 issue, there was room for every submission. But for the second edition, Lucas found himself with a dilemma.

“There’s a lot more people who know about it now,” he says. “Once it came out, people told other people, and now there are people I don’t even know, so we may have to leave out some things. I’ll decide that when it happens.”

Then, he added: “When I first started this, my dad was thinking we were in competition. But now we’re kind of winning.” (Click here to join The Current.)

At the end of each issue of the Times, there is a riddle selected by Lucas. On March 26, it was: How do you get out of a room with no windows and no doors but the room has a mirror and a table?

The answer: You look in the mirror two times, you see what you saw, you take the saw and cut the table, two halves make a whole, you jump in the hole and cry for help, but your voice is hoarse, so you jump on the horse and ride away.

Be on the alert: The first kid to email a correct answer to the riddle each week gets a prize delivered to his or her porch.

To receive the paper, or to contribute articles, email [email protected]

One thought on “Newspaper Launches in Beacon”