You hear them before you see them, a high-pitched chorus of cheeps. Then the mist parts as the trail descends and you see their source: A trailside vernal pool on Bull Hill, or Mount Taurus.

For many Highlands residents, it’s a familiar sound that is instantly recognizable as those of spring peepers, the tiny frogs that take to pools and swamps to call for mates. But for those who don’t live in watery areas such as the Highlands, the sound can be confusing. 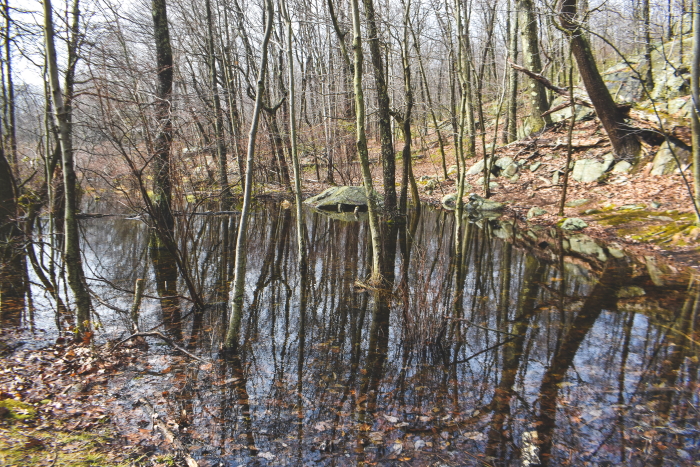 A vernal pool on Mount Taurus. (Photo by B. Cronin)

That’s where Arden Blumenthal comes in. For two weeks in March, Blumenthal served as a vernal pool steward for the New York-New Jersey Trail Conference, spending her days positioned at a spot on the Washburn Trail.

“Hikers have come over and asked, ‘Are those sirens?’ ” she said with a laugh.

Vernal pools are isolated and temporary wetlands that appear in the spring when water that was frozen in the ground starts to melt. If the water hits bedrock or hard clay, it will travel to the surface, forming a pool that lasts until the end of summer.

Because there are no fish in these ponds, amphibians can breed and lay eggs without being gobbled up. That is why amphibians seek them out, sometimes traveling up to a quarter of a mile once they emerge from hibernation. The season begins with the low quack of wood frogs, followed by the high-pitched cheeps of peepers, and then, finally, the silent salamanders. “They’re this natural, temporal stratification of when everybody gets busy,” Blumenthal says. 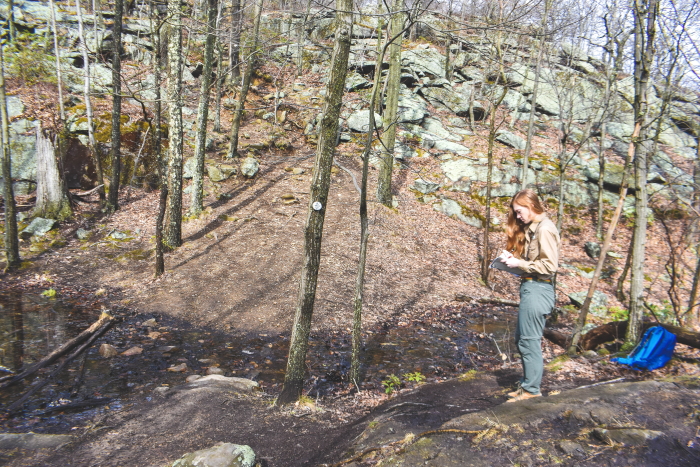 Arden Blumenthal taking notes at the vernal pool on Mount Taurus. (Photo by B. Cronin)

The pool that Blumenthal was stationed near is far from the only one in the Highlands, or even on Bull Hill. During some springs, even puddles near the fire tower on Mount Beacon will fill with tadpoles. But this particular pool’s spot next to a popular hiking trail makes it an ideal location to educate the passing public.

As important as the pools are, they’re threatened. Blumenthal’s role was to speak to hikers about the importance of the pools and their fragility. Unleashed dogs are a particular threat. As a dog owner herself, Blumenthal says she understands the appeal of letting a pup run free in the mountains, which unfortunately includes splashing around the vernal pools.

She says that in the hundreds of interactions she had with hikers, those who had their dogs unleashed were happy to leash them after hearing about how dogs could impact the pools. “People respond well because I’m not that intimidating,” she says. “I’m pretty chipper.”

Blumenthal is optimistic that the vernal pool steward program will return next spring, and she hopes to expand it to include citizen scientists.

As she envisions it, volunteers will visit the pools a few times throughout the season to record data such as the air temperature, if it’s rained in the past 24 hours and the frog call density on a scale of 0 to 3. (Zero is no calls, one means a few individual calls so that the listener can count the number of frogs, two means the calls are overlapping but the listener can still count the frogs, and three means a chorus.)

The data would allow the Trail Conference to map the pools, noting when the wood frogs are peaking and when the spring peepers start, as well as to create a record of the dates of the breeding seasons. As the Highlands continue to heat up, that kind of record would be useful in determining whether climate change is affecting amphibian breeding seasons.

Blumenthal moved to Beacon to join the Trail Conference only six weeks ago, after she defended her master’s thesis at Purdue University on human/wildlife interactions as it relates to seabirds. Like the pools, Blumenthal’s position as a vernal pool steward was temporary. She began the job the day the trails were reopened after a large fire on Breakneck Ridge, and it ended when the Trail Conference began telling hikers to stay home in response to overcrowding on popular trails while social distancing is in effect.

Having fewer hikers will benefit the pools, Blumenthal notes. But the restrictions also limit the number of people who will learn about them. “The vast majority of visitors have no idea what spring peepers or vernal pools are,” she says. “How can you protect something if you don’t know it exists?”

One thought on “Spring Awakenings”