He acquired the Babcock Gallery, which was founded in 1852, in 1987 and in 2012 renamed it Driscoll Babcock. The gallery deals primarily in contemporary and classical American paintings. 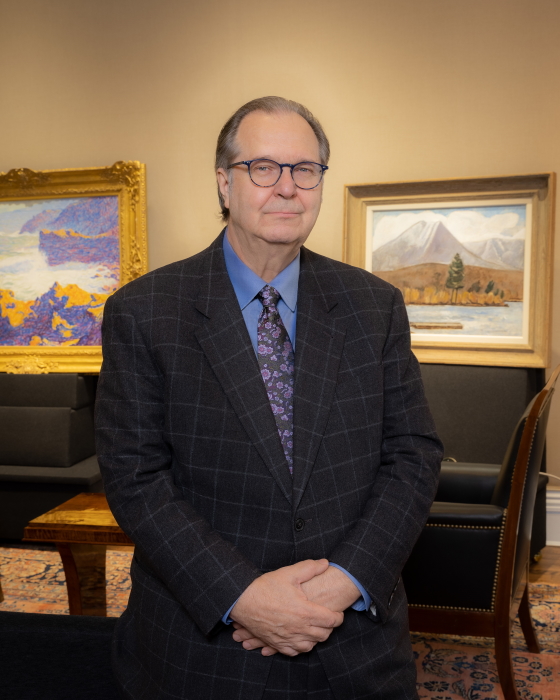 After receiving his bachelor’s degree from the University of Minnesota, Driscoll earned master’s and doctorate degrees in art history from Penn State. He held positions at the William H. Lane Foundation in Massachusetts and the Worcester Art Museum before establishing his own gallery in Boston.

In 2018 Driscoll donated 140 American works on paper to Penn State’s Palmer Museum of Art, where he had worked as a graduate assistant. Drawing on a Legacy: Highlights from the John Driscoll American Drawings Collection opened in January.

“John’s affinity to art and artists began early,” wrote a colleague, Glenn Adamson, in tribute. “He was almost literally a born collector and dealer — he began to acquire and trade early American coins at the age of 10 …

“While still at Penn State, John had become close with museum director Bill Hull, who introduced him to the discipline of modern ceramics,” he wrote. “This became a lifelong passion. And so it was that, even as he spent his days becoming an authority on American paintings and works on paper, John steadily built America’s finest private collection of British studio pottery…. John was a foremost authority on the Hudson River School, particularly the artist John F. Kensett …

“Alongside all these many accomplishments, John was a profoundly humane person, alive with quicksilver humor, yet gentle and generous,” Adamson wrote. “He was a remarkable and profound conversationalist; as his daughter Emily puts it, ‘When he answered a question, it was as if he had been thinking about it long before you asked it.’ ”

Adamson recalled a story that Driscoll told from his childhood when receiving an award. “He had been brought by his parents to the Minneapolis Institute of Art, driving almost four hours ‘past corn fields and wheat fields and bean fields.’ It was, he said, the first time he’d been in an art museum – the first time he’d even been in a big building”:

Truth be told, I found the whole experience a little tedious. But I did, in my tedium, break away from the family and wander around through the galleries, looking mostly at the size of the stones that were in the floor. I’ve never seen such big stones, and they were in the floor. But then there was a magic moment, a moment in which I suddenly looked up at a wall and I saw a painting. It’s the first recollection I have of seeing a real painting in an art museum.

And I can tell you right now that painting went through me like a freight train. I don’t know if I was shaking on the outside, but I was shaking on the inside. I was mesmerized. I just couldn’t handle what was going on. This was an experience I had never had before. [Only later did I find out that] by the sheer work of all of the forces of the universe coming together and putting me in front of that painting, it was probably the single greatest Old Master painting on the North American continent, Rembrandt’s “Lucretia”…

And then all of a sudden there was a tugging on my arm, and my mother was pulling me back and mumbling something about wandering off by myself. I found myself being jerked from this new reality that I experienced, back into the reality of my everyday 10-year-old life, and I knew something at the moment. I didn’t know what had happened. But I did know this: I knew that the experience that I had just had was real. I knew that it was good. And I knew I wanted more of that.