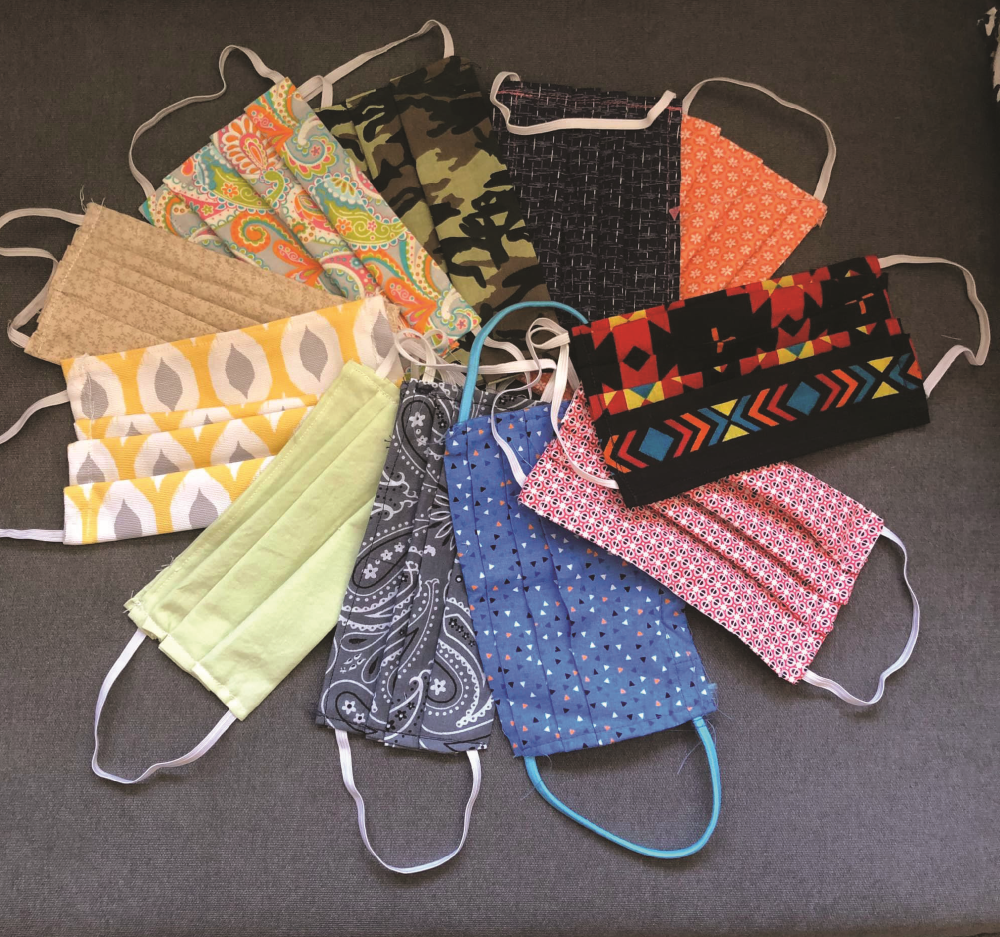 A sampling of masks created by guild members. (Photo provided)

In March, volunteers across Putnam County responded to the COVID-19 threat with a “sew-sew” attitude: They began stitching desperately needed face masks for medical personnel, emergency responders and other essential workers.

A month later, the newly created Putnam County Mask Makers Guild has nearly 600 participants and more than 4,000 masks to its credit in an effort that involves not only seamsters (those who sew) but others who sanitize the masks, oversee deliveries and supplies, package the goods and handle other non-sewing functions.

Philipstown guild members include Nancy Montgomery, who represents the town on the Putnam County Legislature, and Kathleen Foley of Cold Spring.

Montgomery said she became concerned in early March about a shortage of personal protective equipment (face masks, surgical gowns, gloves and similar items) for first-responders, health care professionals and social service staff who assist disadvantaged women and children and others at risk.

She said she solicited masks from the construction trades, nail salons, tattoo parlors and similar businesses. In response, she received medical-grade masks, sewing patterns and what Foley termed “innovative thinking by creative people.”

Montgomery recalled that “neighbors started sewing with whatever materials we had in our homes — quilting cotton, lengths of elastic, floral wire for nose pieces.” In western Putnam, the movement “took on a life of its own. Then the east side of the county formed their own group, and we joined the two.”

“As word of our production spread, we began getting larger requests from other counties and New York City, including firehouses, the New York City Department of Corrections, children’s hospitals — even an order for 2,000 masks from an EMT union.”

The group also has supplied masks to social service organizations such as the Putnam Community Action Program and the Children’s Advocacy Center, as well as the Philipstown Food Pantry at First Presbyterian Church in Cold Spring and a food bank in Brewster. 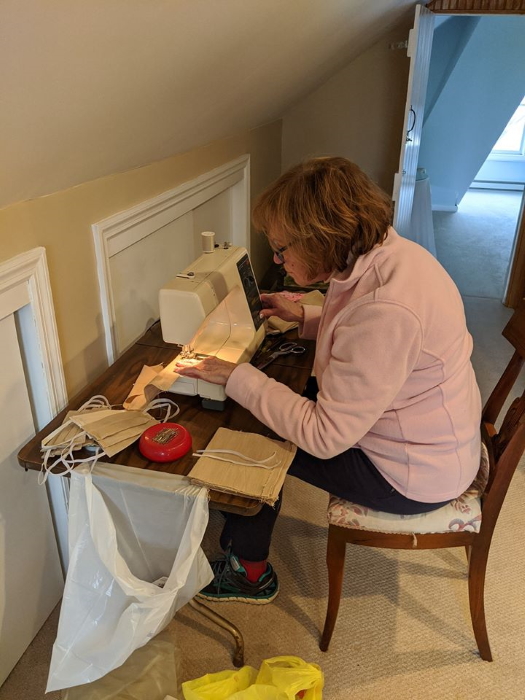 Although not on the same front line as hospitals, such agencies need personal protection equipment, Michael Piazza, the county’s social services director, told the Legislature’s Health Committee on Tuesday (April 14). “There’s not enough of a supply to address the need. That continues to be an issue and a concern, he said.

The Putnam guild has reached across county and international borders to locate supplies to make the masks.

The Philipstown government contributed $4,000 to buy HEPA filter fabric from a firm in Toronto, using money from a COVID-relief fund established by an anonymous donor. Vincent Montuorno, a New York City firefighter who lives in Patterson, rendered aid, as well. The masks can’t replace high-grade (N95) masks but bridge the gap until more become available. 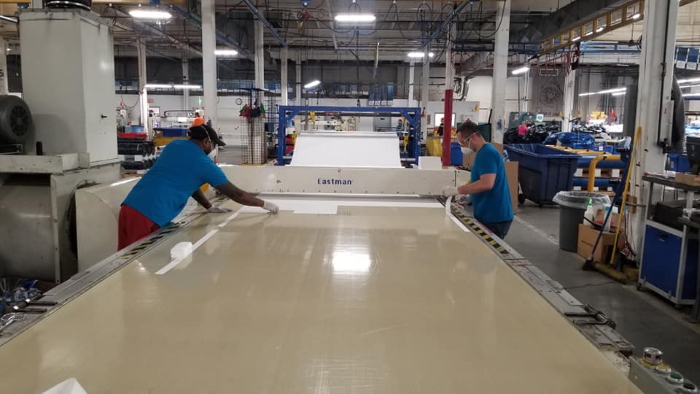 In his report to the Philipstown Town Board on April 2, Supervisor Richard Shea said the town bought enough HEPA fabric to insert into 50,000 masks.

“I was thinking that was just crazy,” he said. “But we already have orders from mask-making guilds for thousands of these.” 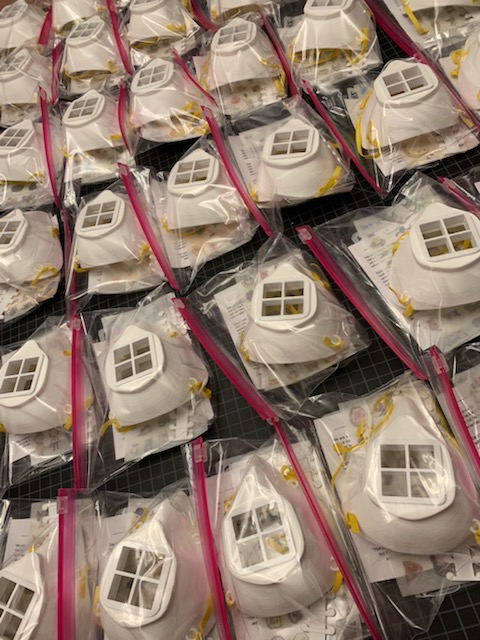 Guild members aren’t the only mask makers in Putnam County. David Chau of Carmel has been making masks by pouring liquid resin plastic into a mold and later adding 3D-printed straps and filter elements.

According to his employer, Synchrony, a financial services firm based in Stamford, Connecticut, Chau and his family have created, packed and distributed dozens of masks. To complement such initiatives, Synchrony on Tuesday (April 14) launched #GearUp, a campaign bringing together local organizations, small businesses, charities and Synchrony employees to produce and distribute masks and other personal protective equipment.

The firm also donated $5 million to anti-hunger organizations and communities dealing with the economic shocks of the pandemic.

At Putnam Hospital Center in Carmel and elsewhere, Shea said, “we know they’re being used” because medical personnel “don’t want to keep using the same mask or they want to put these over other masks. They provide an extra layer of protection. We appreciate all the people who are cranking these out.” 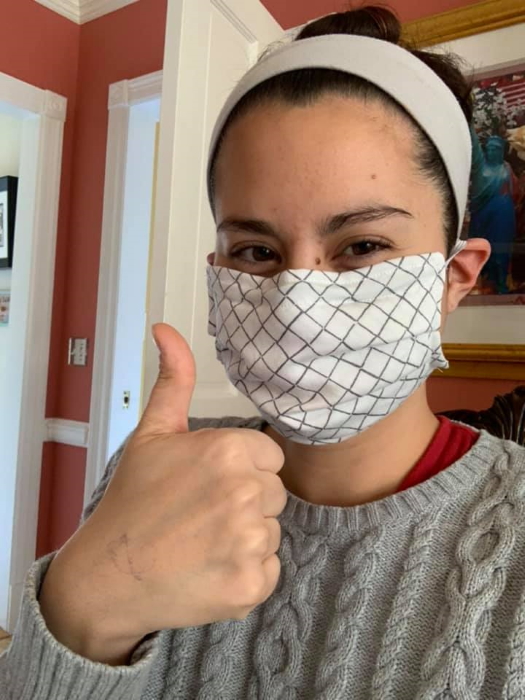 Foley said the Putnam guild volunteers include Erin Crowley of Mahopac, who organized “an army” of delivery people while caring for her four children, including 22-month-old triplets; Kei Reing, another Mahopac resident, who leads the stitching team; Jenn Lee and Charlotte Palmer Lane, “professional stitchers” in Philipstown; and Heidi Stephens of Cold Spring, who coordinates supply movements.

Aric Kupper, an emergency room physician at Putnam Hospital who lives in Cold Spring, tried on the prototypes and offered advice.

To help finance its work, the Putnam guild established a GoFundMe campaign at bit.ly/mask-makers-putnam that has so far raised more than $20,000. (The group also has a website at pcmaskguild.org.)

“We are not selling masks, and no one is making a profit,” Montgomery said. “We are giving them to first-responders and essential workers. Sometimes their parent organizations make donations for materials, and we’re grateful.”