It’s the blue hour — that hour after sunset when it’s still light enough that I don’t yet need to turn on my headlamp. No moon tonight, just Venus winking on over the horizon as I slowly increase my speed, finishing up a set of hard intervals. Still training, even though there’s no longer anything to train for.

I was scheduled to be in California next week, running 62 miles though the Marin headlands in the Miwok 100K. Of course, that was canceled. I should be preparing for this summer’s Vermont 100 Miler, a race that took me two years to qualify for and I’ve been training for since September. That, too, was canceled. The reason all my races have been canceled is the same reason why I’m running here, on one of the less popular sections of the Dutchess Rail Trail, at night, with a bandana circling my neck that can quickly be pulled up over my mouth and nose if the trail gets crowded. But it’s not crowded, not here, not at night and with ample space to give others room.

We have all had to redefine what adventure means, what it means to go for a hike, especially now with the most popular trails closed. We stay close to home, we avoid doing anything even remotely dangerous, and we look for those roads less traveled that will allow us to be far apart from others.

Just as we runners have had to ask ourselves what the point of running is with no race to train for, hikers have had to ask themselves what the point of hiking is without elements of risk and Instagrammable views. The answer to both of those questions is the same. We run and hike so that we can be outside, under the sky, and feel at home in the world. As much as I love the mountains, we don’t have to be on a mountain to have that feeling. 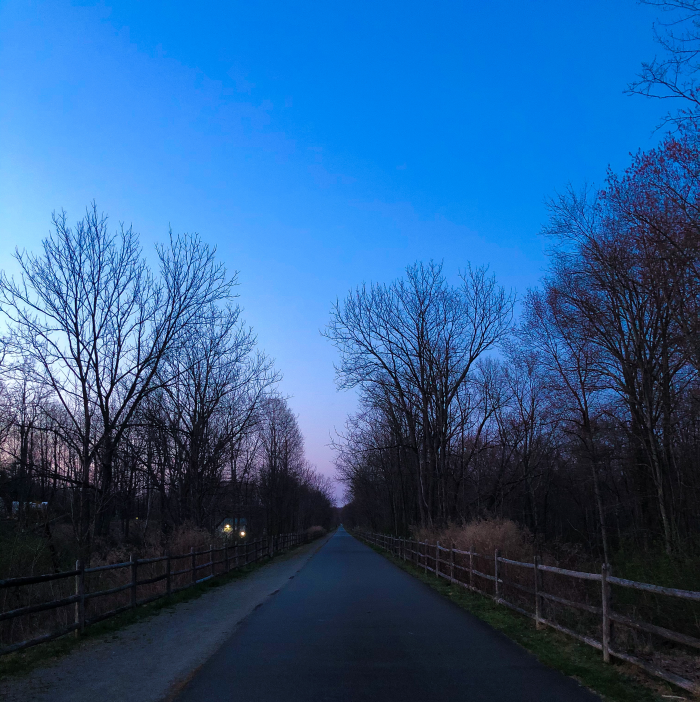 Taking a moment during the blue hour. (Photo by B. Cronin)

Of the most insidious blows that the COVID-19 crisis has struck is the fact that, in order to protect ourselves and others, we must keep our distance. So we call and text and Zoom and tweet and even, as a last resort, use Facebook. I return to the outdoors. It’s worth making the extra effort to find those quiet places that we may have shunned before for being “too boring,” or to go during the dawn or dusk hours. I’ve had quite a few peaceful hours running in a loop on the Beacon High School track at night. It’s enough.

Looking up at the darkening night sky, I think about the Moon Palace. It’s an old Inuit myth. A young woman, heartbroken after losing her first and only love, is propelled by a wave of grief into the sky, landing on the moon. There, she spends the next 30 years in the Moon Palace, where she can still see and hear everything on Earth but remains separate from it. This is how she wants it. She wants to feel nothing.

One day she hears a graceful, mournful song coming from a trio of Inuit seal hunters, and she longs to go back. At this point, an old woman appears and asks how long it would take to walk back to earth.

The younger woman can’t even imagine. Weeks? Months? Years? “Oh my dear,” says the elderly woman. “The earth is only three steps away. But you have to keep your eyes open the whole time.”

This period of uncertainty may last months or years. We are navigating a landscape of in-betweenness. So go outside. Even in isolation, we are closer to one another than we may think.

The light has faded, and I switch on my headlamp. Another runner approaches, and we move to opposite sides of the trail as we pass and wave. Runners are familiar with the wave or the head nod. Sometimes it’s a way of saying, “What a beautiful day,” or, if it’s raining, “I see you also are crazy.” These days, it means “Thank you for looking out for me.”