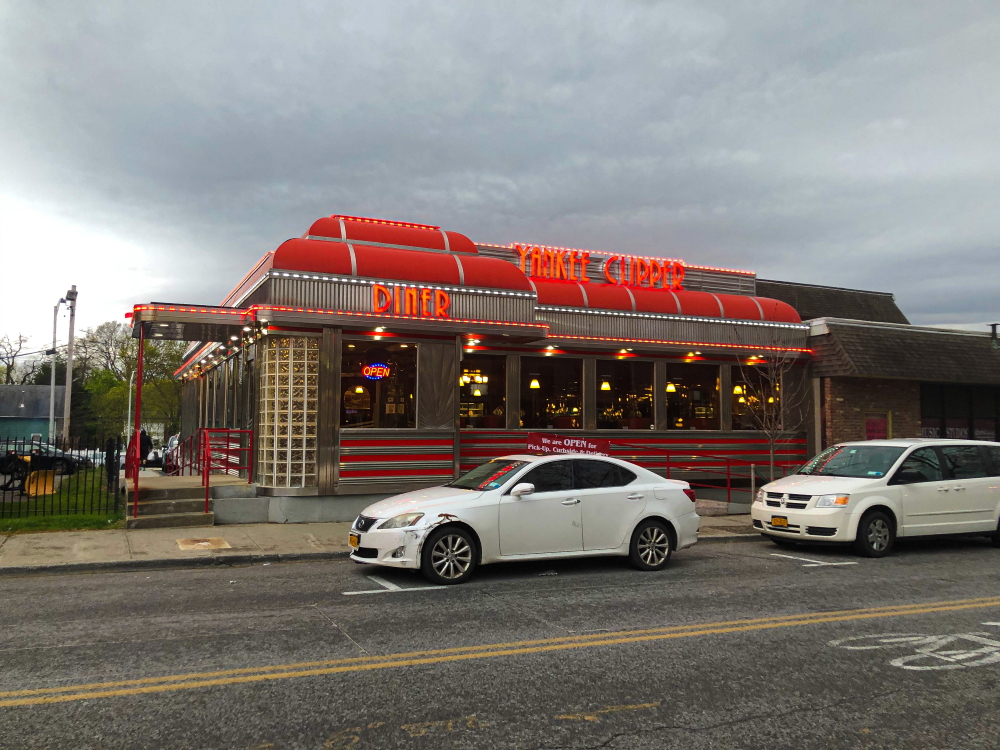 The Yankee Clipper in Beacon reopened for takeout on April 29. (Photo by B. Cronin)

Some restaurants that closed cautiously reopen

When the COVID-19 crisis first hit, the Yankee Clipper Diner in Beacon, like many restaurants, switched to takeout and delivery.

But as the first days of the crisis passed by, its owners had second thoughts. The staff were nervous about staying open. Customers would share the news that mutual friends were getting sick. And customers would wait in the dining room for their food, where there isn’t a lot of room for social distancing, which only made the staff more concerned.

“It’s hard,” said Katina Pertesis, one of the Yankee Clipper owners. “These are our customers, people we’ve known for 16 years, and we want to chit-chat.”

After a week, the diner decided to close.

Kamel Jamal, who owns Angelina’s in Cold Spring, and Tito Santana’s, Ziatun and the Beacon Bread Company in Beacon, had a similar experience.

“We had a lot of uncertainties that weren’t answered through our government and the people we’re putting our trust in,” he said. “Without compromising our safety, we elected to close shop until things became a little bit clearer.”

But a month later, many restaurants that closed within the first week of the crisis are now reopening. The Yankee Clipper reopened for takeout and delivery on Wednesday (April 29) from 9 a.m. to 8 p.m. “If we think we need more hours, we’ll extend it,” Pertesis said. 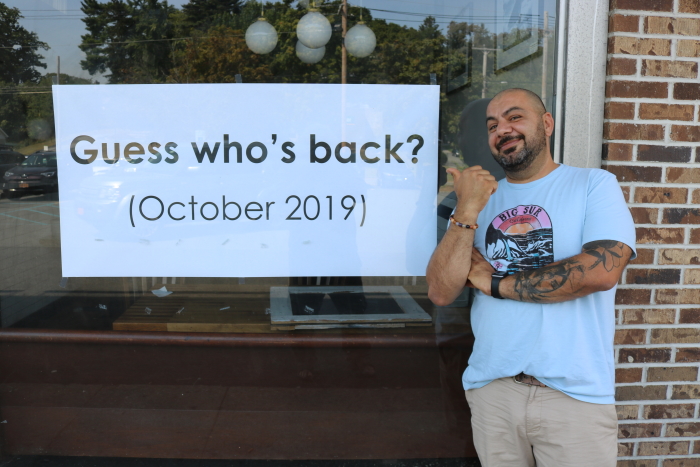 Kamel Jamal sold Angelina’s in Cold Spring last year and then bought it back. (File photo by Michael Turton)

Jamal has reopened Tito Santana’s and Ziatun seven days a week, and Angelina’s will be open five days a week, he said. Jamal also said he plans to open Beacon Bread Company today (May 1), although he’s not sure if there will be a market for takeout breakfast.

“That’s the last piece of the puzzle to establish the new normal,” he said. “We’ll give it a shot and see if we can survive.”

In Cold Spring, Hudson Hil’s Cafe, which also closed for safety concerns after trying to offer takeout, reopened on Thursday (April 30). Hilary Hayes, who owns the business with her husband, Bob, said that they plan to be open Thursday through Sunday and expand service if there’s demand. 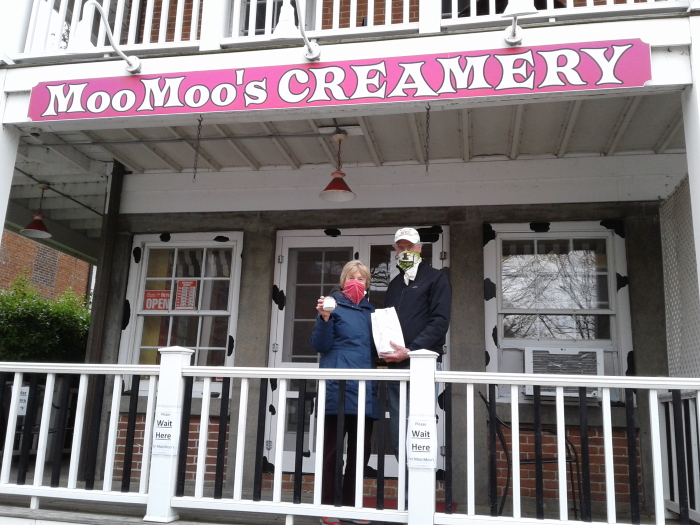 Barry and Jean Llewellyn were among the first — if not the first — customers at Moo Moo’s Creamery in Cold Spring when it reopened for the season on April 23. (Photo by Lois Powers)

“We are going to institute some more ideas once we get open,” she said. “There might be a fried-chicken night, maybe some dinner things, and some fun to-go boxes.”

At Moo Moo’s Creamery on the waterfront, Alexi Katsetos said he had planned to open for the season in mid-March but held off until April 23.

“For the foreseeable future we will not allow customers inside the shop” but will serve from a single counter on the porch,” he said. “With the [federal] Paycheck Protection Program a mess, and no unemployment benefits for me, I can hopefully attract enough customers to make a living this year.”

While none of the restaurant owners believes the crisis will be over anytime soon, each said that the closure has provided time to get a clearer picture of the scope of the crisis and figure out how to safely do business. That means masks and gloves for employees, coming up with systems to keep employees as far away from one another as possible, increased cleanings and disinfectants, and figuring out how to minimize physical interaction with customers.

“Being closed for a month also gave the public the opportunity to learn how to deal with the day-to-day transactions and how to interact with one another on a different level than we’re used to today,” said Jamal.

Like it or not, said Jamal, as the weather gets warmer, tourists will start coming to the Highlands, crisis or no crisis. If restaurants can’t figure out how to do safe takeout with locals, the problem will only get worse when tourists arrive, even if they are keeping their distance. 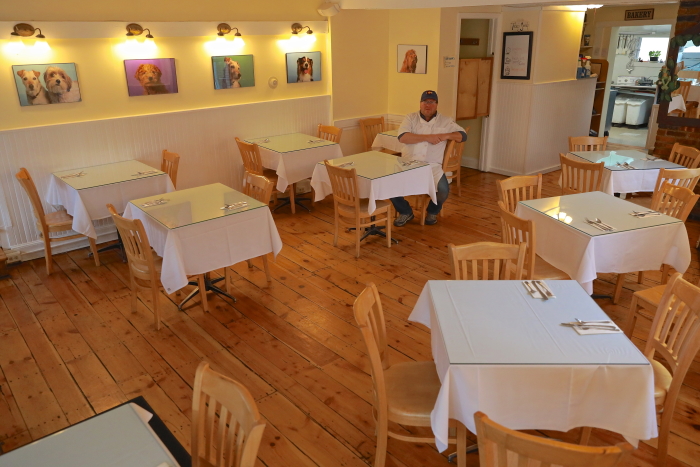 Bob Hayes, co-owner of Hudson Hil’s, at his cafe in Cold Spring soon after the shutdown began. (File photo by Ross Corsair)

“We’re going to get crowds up from the city,” Jamal predicted. “There’s no stopping them; they’re jumping on the train. And it’s not because they’re bad people and they don’t care about what’s going on. It’s because they’re human. It’s our obligation as business owners to prepare ourselves for this. It’s either we close our doors and not open at all, or we open our doors and lead by example.”

Opening now, said Jamal, will also allow him to start paying his vendors again, who can then pay their staff. “There’s so much that our business can contribute to the economy to keep it moving forward in a safe manner,” he said. “It’s a slower pace, but it’s a pace. We’re not opening our doors now to make a profit. Small mom and pop shops are the backbone of this country and we’re the ones that are going to save this country by restarting the economy. That’s our obligation.”

Find details in our Dining Out at Home guide.

Hayes agreed that, as far as coming back online, it was now or never. “We have to get the restaurant reopened to a certain extent for it to be an ongoing proposition,” she said. “If we wait six months to do this, it won’t happen. And people are asking us. We want to be there for the community, but in a safe manner.”

Although Hudson Hil’s Cafe may not be the beehive of social activity that it usually is, Hayes said she looks forward to getting some life back in the place, “even if it’s from a distance,” she said.

Pertesis, too, said she is ready to get back to work.